(Book titles don't get more truthfully descriptive than that...)

One of the most distinctly unique talents working in animation, Japanese artist Yuasa Masaaki has had quite some coverage on the ScreenAnarchy site. You can say we're big fans of his output, hell, last year I even wanted to give him a hundred million dollars just so he'd make a new film.

Also, Peter van der Lugt and I interviewed him shortly after the release of his short Kick-Heart, and that conversation was one of my fondest memories of last year.

So when I heard that in Japan they were going to release a thick book with sketches from all his animation productions, I pre-ordered the tome with haste. Now that it has arrived, I feel it's my duty to tell all other fans out there about it, for it is quite magnificent.

For starters, it is a big book at 400 graphic-novel-sized pages, most of which have been crammed with color drawings big and small. There is very little text apart from the index. No articles or essays, or lengthy descriptions of the projects. There aren't even comparisons with the final art used in the animation: the whole book is just sketches with captions. Note that I can't read Japanese to save my life, but my lack of polyglot skills is not infringing much on my happiness about this book. That doesn't mean I'm not dying to know what some of the captions mean, but literally 99% of the book is purely visual.

With the book being so thick, there is plenty of space for his better-known projects to get the limelight, with each of them having their own chapter. His extraordinary full-length feature film Mind-Game gets 52 pages dedicated to it, his stellar series Kaiba even gets 60. The biggest chapter is for his work on the Crayon Shin-Chan series and films, almost a book in itself at 118 pages. I'm not a big Shin-Chan fan, but according to these sketches, that show went to some pretty spectacular wild places in its last years.

The most recent work getting a chapter is Kick-Heart, so his involvement in the Space Dandy and Ping Pong anime isn't mentioned yet here. Maybe in a future book?

All in all this book comes very much recommended, a no-brainer even if you're a fan of Yuasa's work. It gives a rare peek into the mind of a crazy talented genius.
Basically the only drawbacks are that it's not English-friendly, and from Japan, meaning teeth-gnashingly expensive. It's not hard to find: several large on-line outlets (like YesAsia) sell it.

I'll end this review with a gallery of some pictures from the book, so you can get an idea what it looks like. 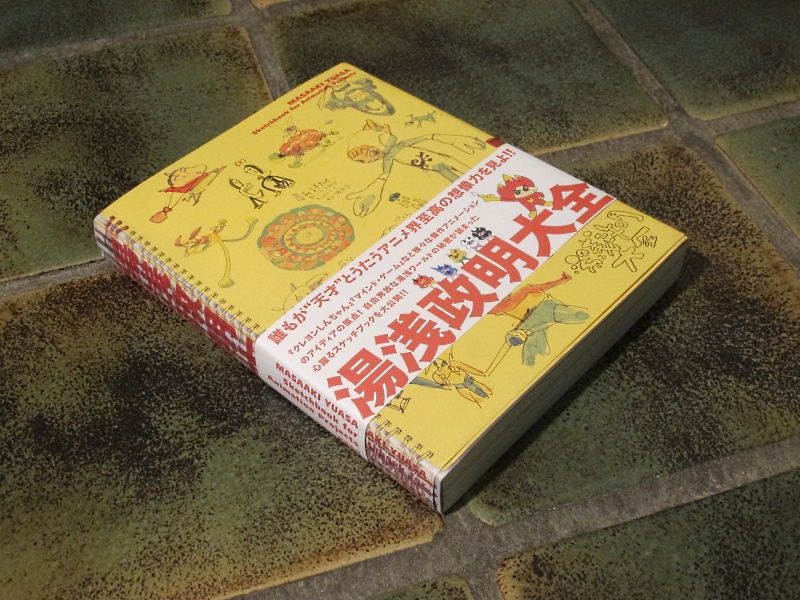 And here is the book itself. Don't worry about it looking like a stack of sketchbooks: that's fake. It's a regular softcover book. 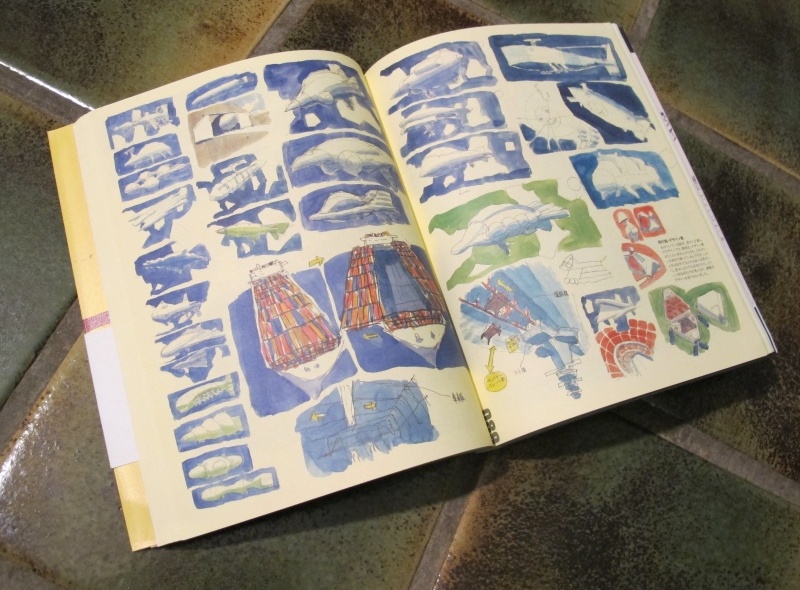 Here are some of the many, MANY Crayon Shin-Chan design drawings. These show not only regular Japanese life, but also James Bond adventures, trips to famous locations all over the world, and even science fiction!

Speaking of which, check the next picture... 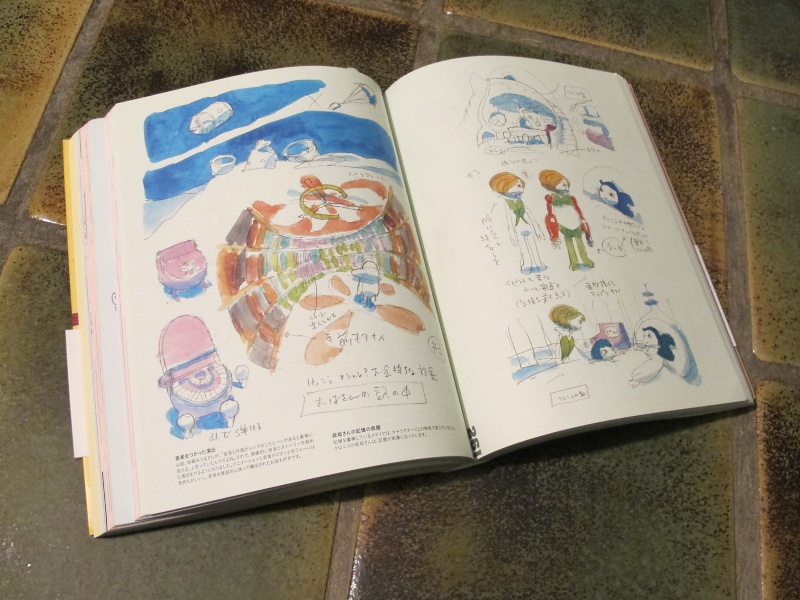 These are some design sketches for Kaiba. If you've seen the series, you can probably remember the devastating scene where Clonico's stepmother gets her memory back, while she plays the piano. These are preparations for that scene.

Give me a kick, give me a heart, give me a Kick-Heart! The designs for Yuasa's masochistic wrestling short show many other characters, which might have appeared in the film if the funding (by way of Kickstarter) would have allowed for more length. 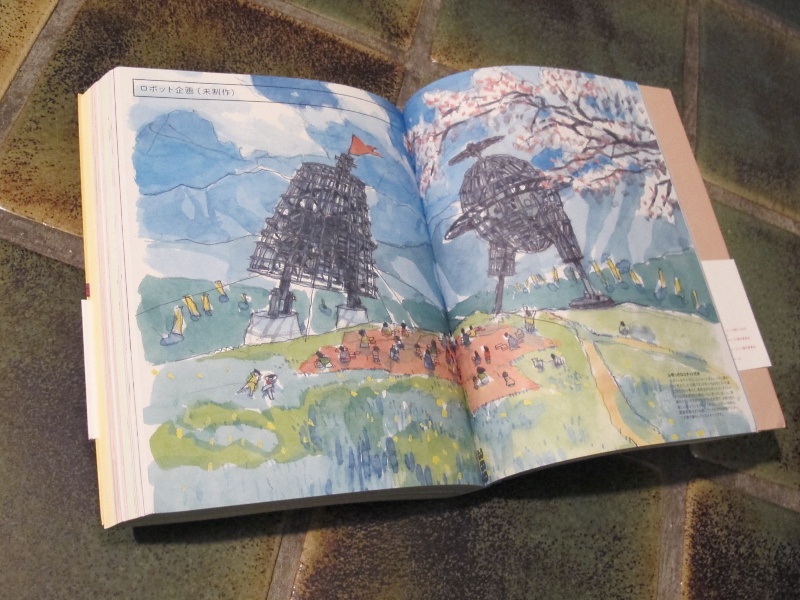 I have no clue what this is, but it looks awesome. 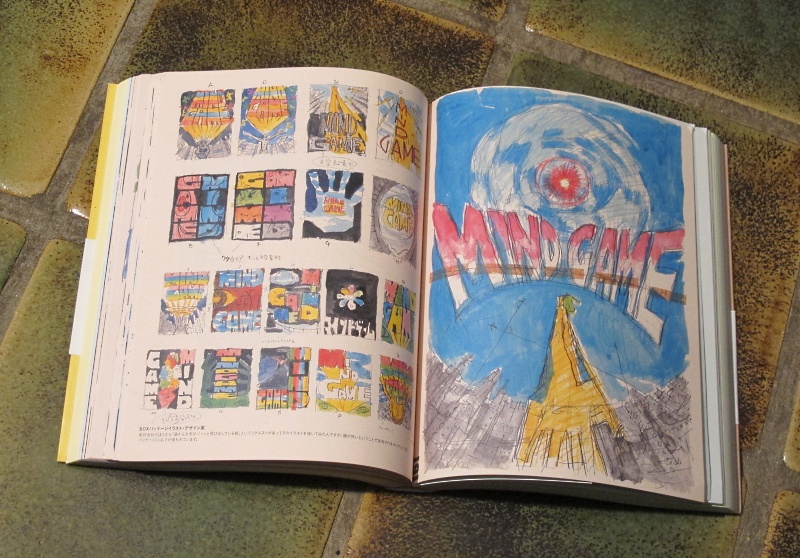 Of course I can't end the article without showing some Mind-Game: here are designs Yuasa Masaaki made for posters, flyers, etcetera.

Many of these were actually used: if you own a DVD of Mind-Game, chances are the cover of it is somewhere on the left page.

Do you feel this content is inappropriate or infringes upon your rights? Click here to report it, or see our DMCA policy.
animebook reviewCat SoupMasaaki Yuasa

I need this. Got a place for it on the shelf next to Koji Morimoto's Orange.