Last year, the German publishing house Taschen released an astonishing holy grail for fans of Stanley Kubrick's seminal science fiction film 2001: A Space Odyssey: a boxset which included four book volumes, enclosed in a black metal box reminiscent of the film's monolith. Included were an alternate version of Arthur C. Clarke's novel, a screenplay copy with annotations by Stanley Kubrick, a huge making-of book by Piers Bizony, and a smaller art book with stills from the film itself. In total it was listed as having 1384 pages, was limited to 1000 pieces, and cost a whopping 750 Euro (over 900 US dollars at the time).

I'm known as a compulsive buyer, but this was far above any pricing point I was comfortable with. Not that I even got a chance to ponder: the set had sold out immediately. Last time I saw a copy in a shop, a month back, they asked over 2,500 dollars for it.

Two weeks ago I got a note from a friend, saying that Taschen was actually releasing the biggest book in the set, the 560 page Piers Bizony one, separately as an unlimited edition, and for around 50 dollars. BOOM! Bought.

This version is currently only out in Europe already, but will be released West of the Atlantic in a few weeks time. And, in short, it is quite possibly the best thing I've bought this year.

Piers Bizony is a well-known journalist writer on the scientific front, with a special interest in space travel, real and theoretical. Other areas of expertise include special effects technology, so it's easy to understand why he's such a stark raving fan of Stanley Kubrick's film. As such, while you might be buying this volume for the pictures, the writing isn't to be sneezed at. The Making of Stanley Kubrick's 2001: A Space Odyssey reads like a 500+ page Cinefex article, and that's not a bad thing at all.

The book doesn't just focus on the film either. While its nine chapters basically cover "before", "during", and "after" the making of the film, Piers is not afraid to veer off into interesting directions. An overview of Stanley Kubrick's career early on in the book is surprisingly thorough, more so perhaps than would be strictly necessary, but it provides a lot of context for the later chapters.

The last chapters are frank in describing 2001's initial hostile reception, almost being pulled from cinemas as a loss, until it suddenly became popular with the younger counter-culture and was quickly re-marketed as "trippy". Other asides cover Kubrick's frustrations (and ultimate failure) in trying to find a way of showing an alien life-form in the film, and address the theories about just how 'alien' an actual alien life-form could be. The technologies shown in the film are also juxtaposed against what we currently have in real life, such as mobile telephony, and portable screens.

But the vast majority of the book covers the film itself: its design phase, the shoot, the groundbreaking special effects, the actors, and of course Stanley Kubrick on-set. The finished film's abstruseness isn't avoided (in comparison, Arthur C. Clarke's novel reads like "Enid Blyton's Famous Five In Space"), and neither does the book shy away from controversy. Piers often has (in)famous anecdotes re-told from several sides. As a fan, he obviously is slanted towards the positive angle, but not to the level where the book suffers much from it. Truth be told, if you bought this volume, chances are you're part of the choir he's preaching to anyway. I sure am.

What Piers Bizony wrote would make a pretty good pocket in its own right, but where this book also shines is in its pictures. You get your first taste at page 26 when the big two-page spreads start, and the effect is jawdropping. A few pages further you get your first fold-out page, and your jaw will most likely drop again. Many more fold-outs will follow. There are literally dozens of them, some of them double-fold-outs even, resulting in poster-sized images. And it's just glorious.

This gets repeated in every chapter: a text part first, which is followed with giant pictures, many of them of the fold-out variety. You get actor portraits, technical sketches, design paintings, movie posters, behind-the-scenes shots... all marvelous.

So... I cannot recommend this book enough if you're a fan of the film, or of books about making a film. Me, I almost feel the urge to buy a second one in case I damage the first (them fold-outs are a bit tricky). And I secretly would want a third copy, to cut up so I can frame some of those images.

I'll end this review with a gallery of pictures of (and from) the book, so you can get an idea about just how good it looks.


(The Making of Stanley Kubrick's 2001: A Space Odyssey is out now in Europe, and will be released in the US in early September.) 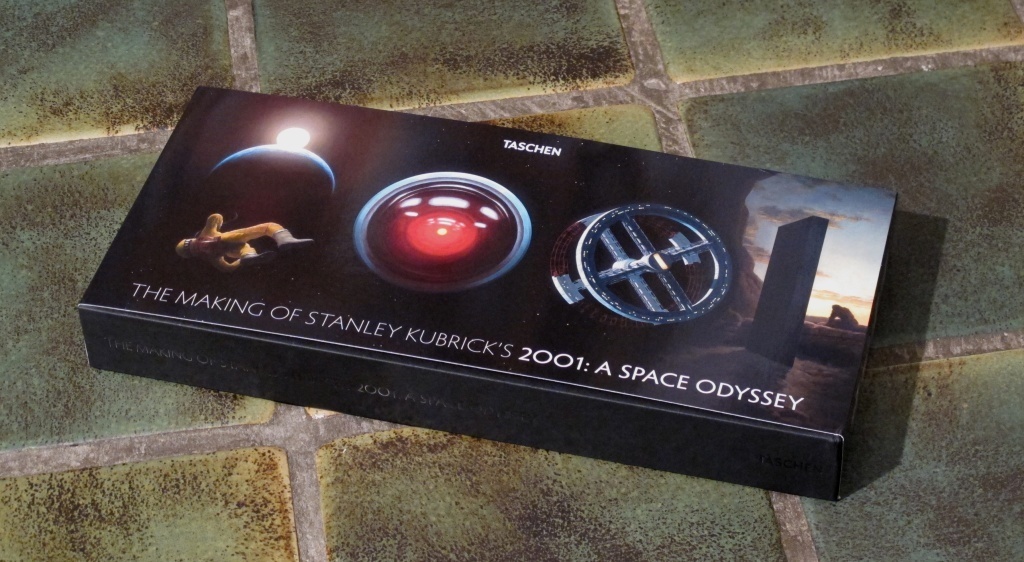 And this is what it looks like: a large coffee-table book with a slipcase.

Click on the edges of a picture to move to the next, or in its center to see a bigger version! 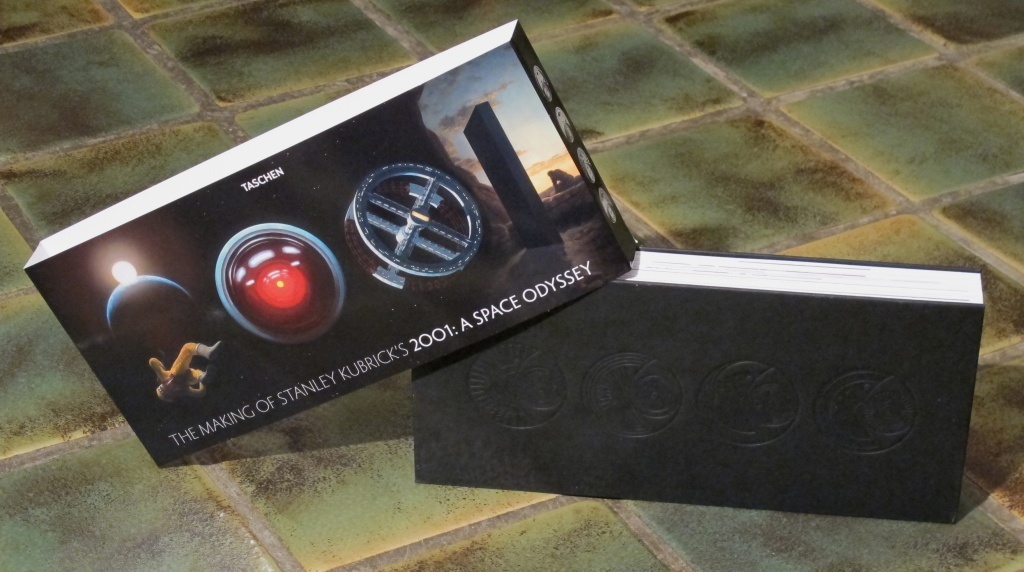 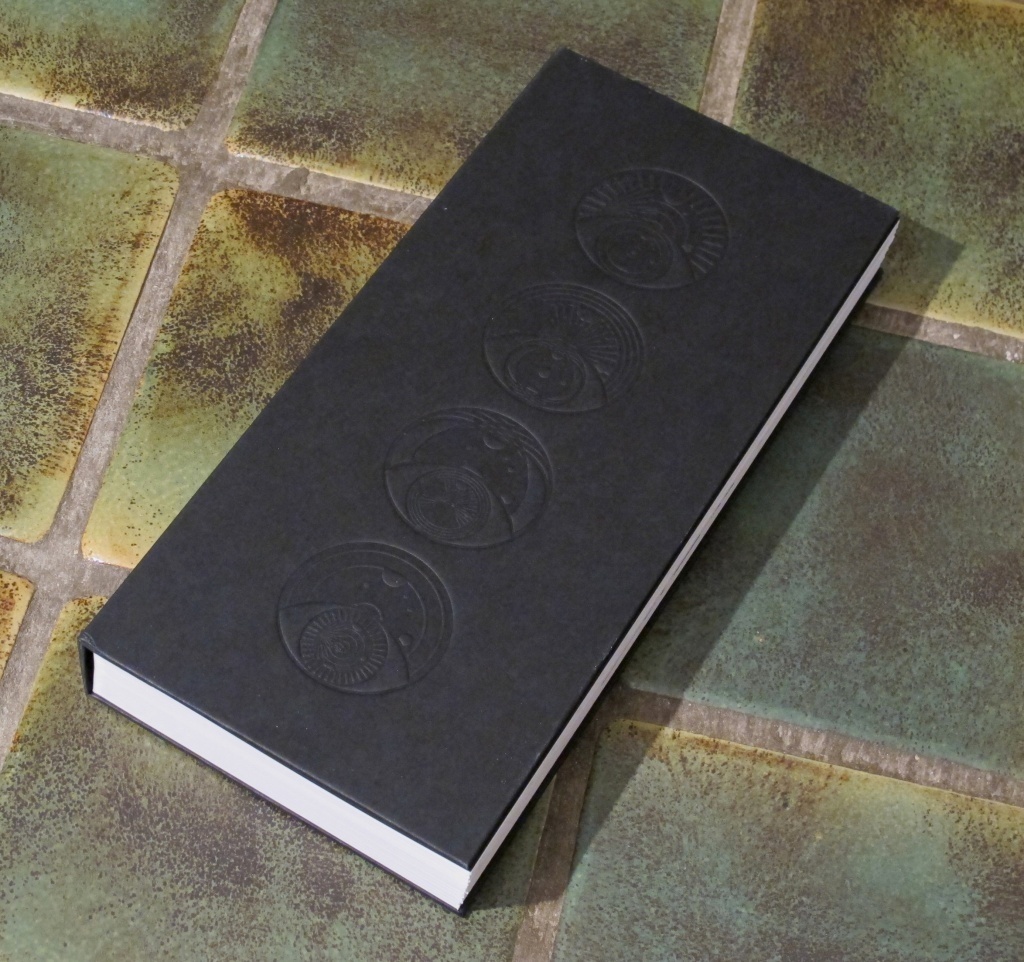 It would have been neat if its dimensions equaled 1 X 9 X 25, but I'm sure not complaining about it being a lot thicker than that. 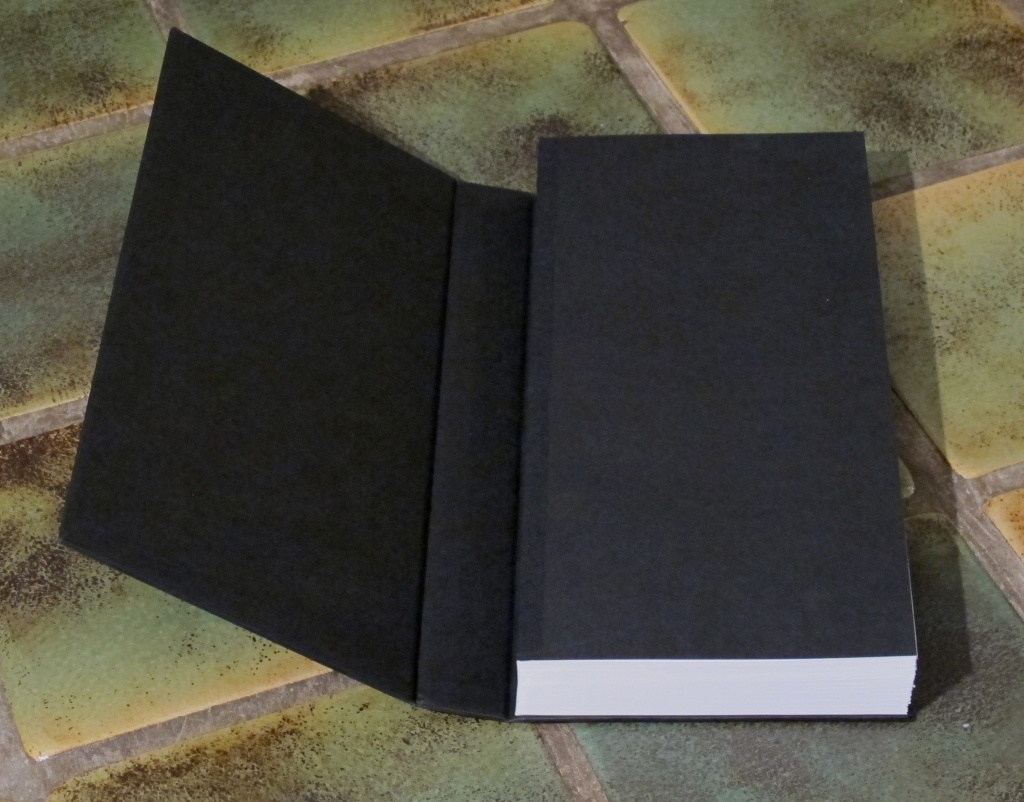 Due to the book's odd dimensions, handling its pages (including the many fold-outs) could easily have become a chore. Thankfully, the book has two spines: one for the hard cover, and a very flexible thin one for the pages. 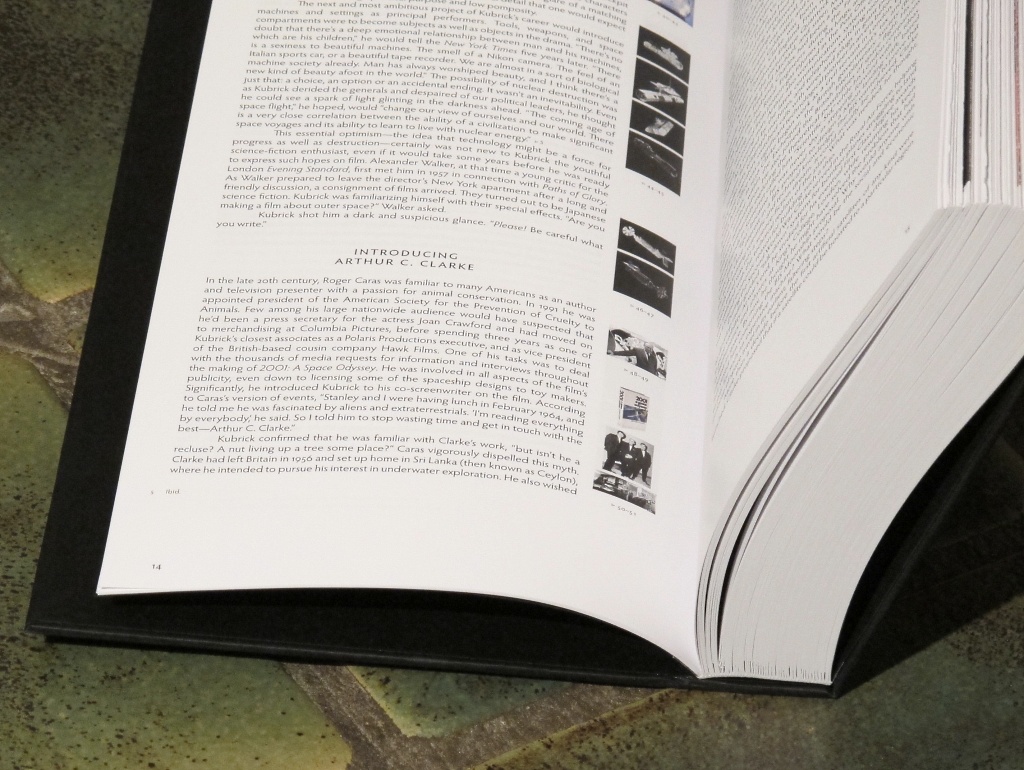 If you expected a giant font to go with the book's size, or a tiny amount of text, think again. There is plenty of writing in here, it's not just a picture show. 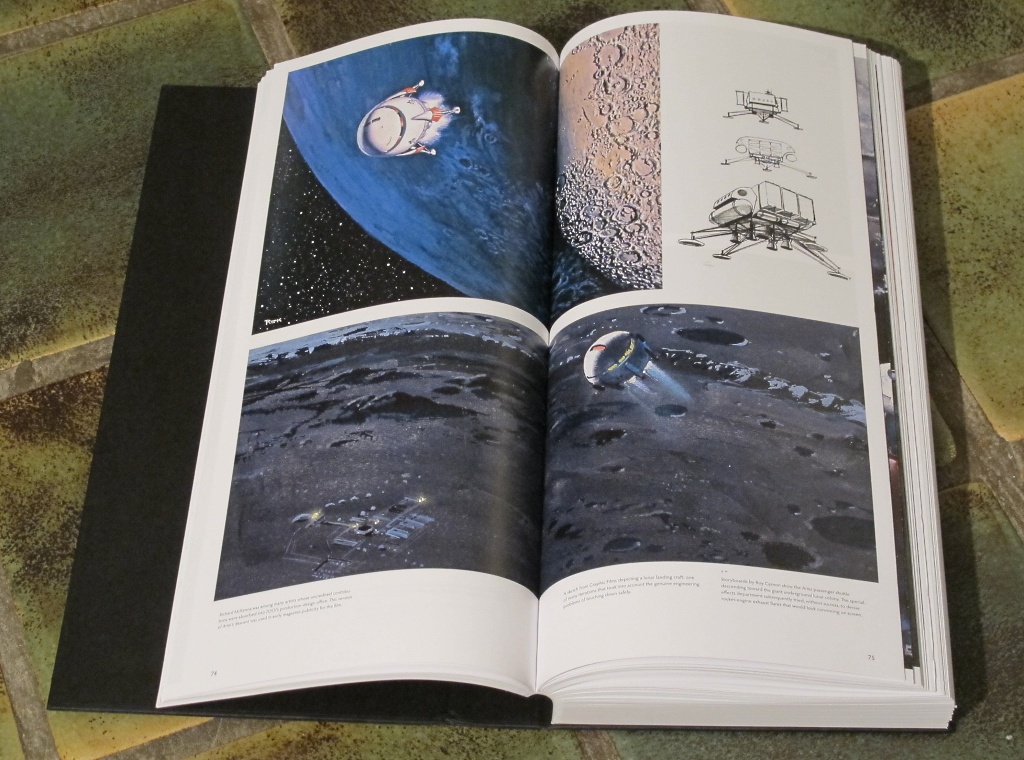 Having said that, the picture show is great when it starts. 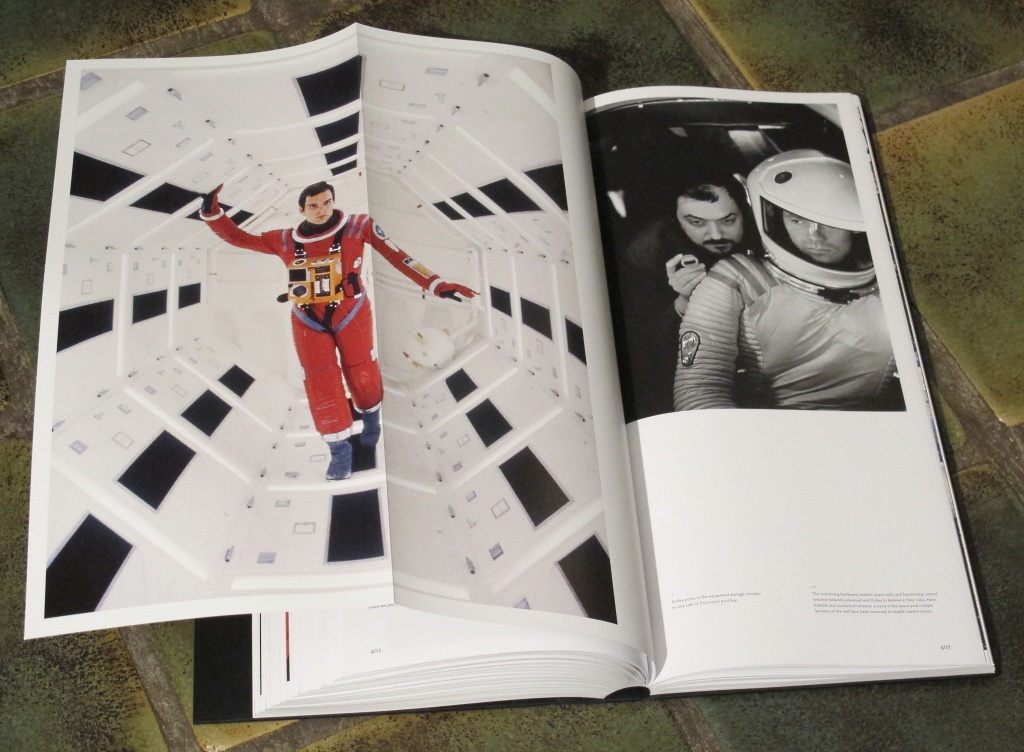 One of the book's many, many fold-outs. Even the more familiar images gain impact from their sheer size and sharpness here. 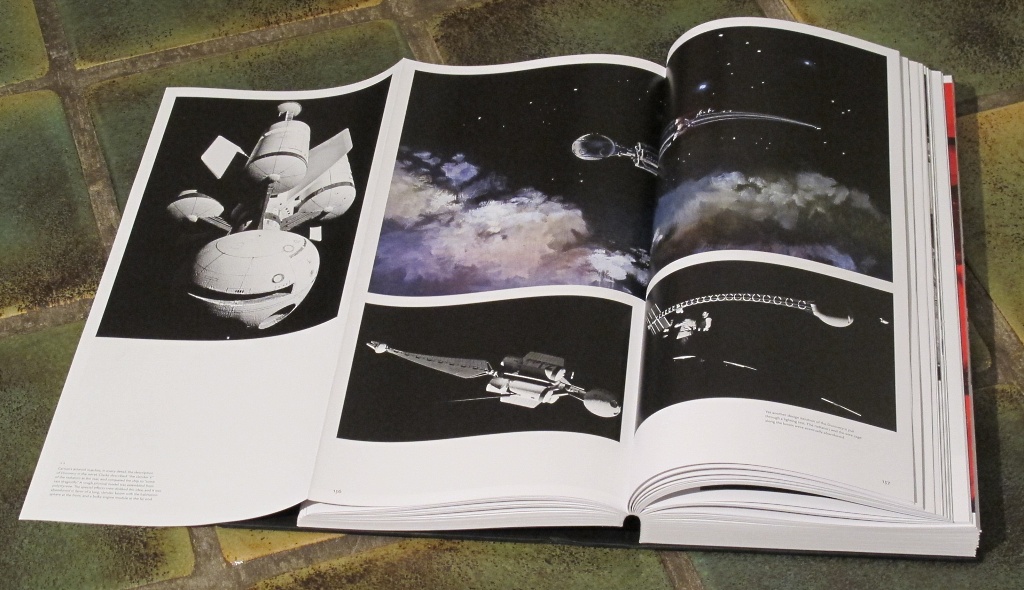 But many of the pictures I've never seen before, like these early designs for the Discovery spaceship. 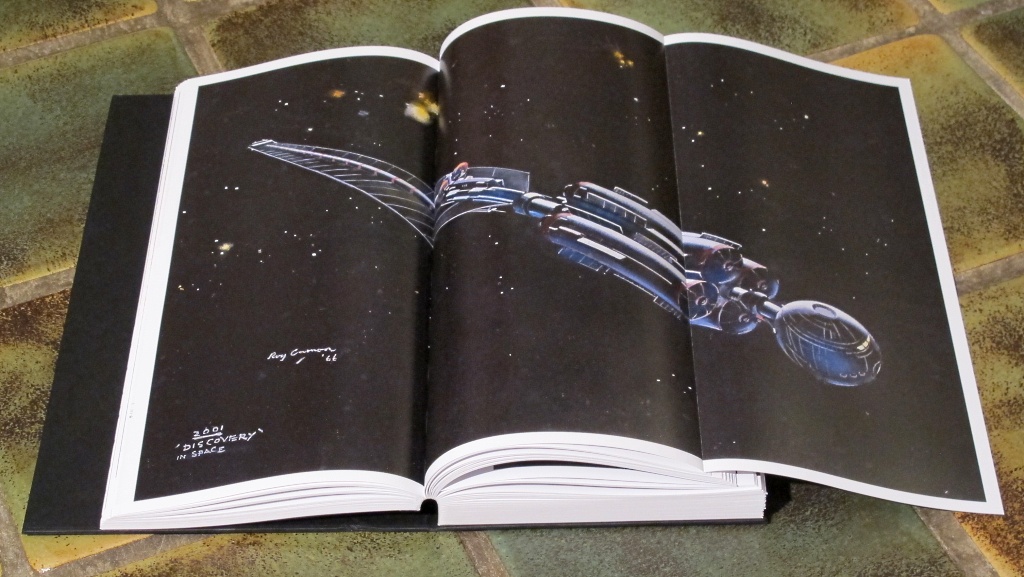 This was literally the first thing I saw when I opened the book for the first time, at random. And it's awesome.

These rendered me speechless. 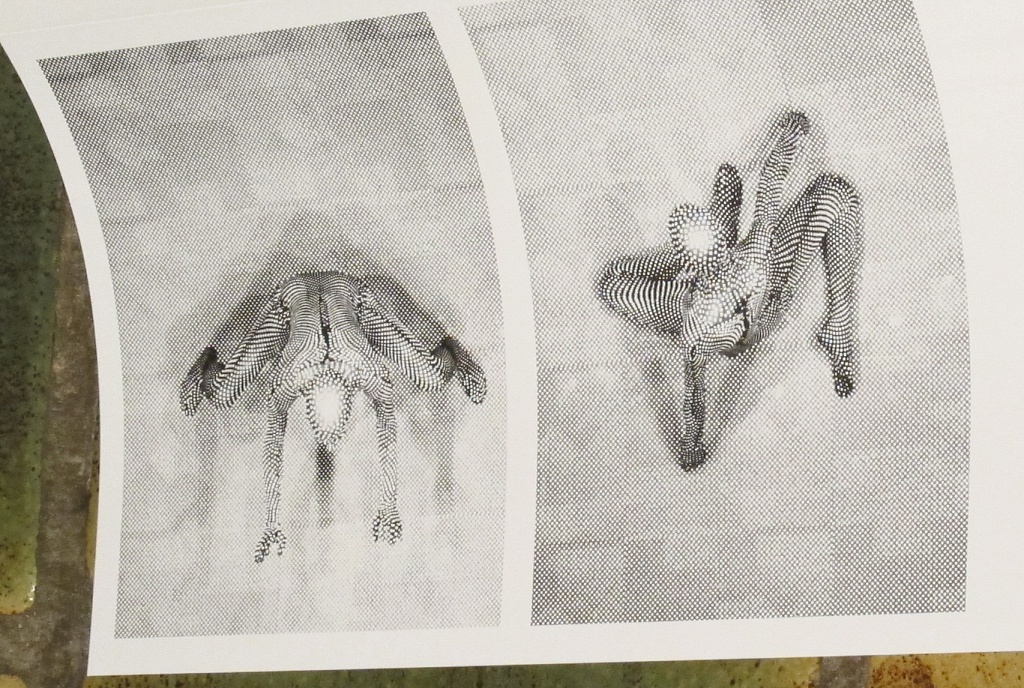 These pictures are intriguing to say the least. Was Stanley already experimenting with motion capture in 1968?

Alas, no. Here is the caption:
'Dan Richter in bodysuit and "polka dot" makeup, during attempts to create an alien entity. Kubrick eventually decided not to show the aliens themselves.' 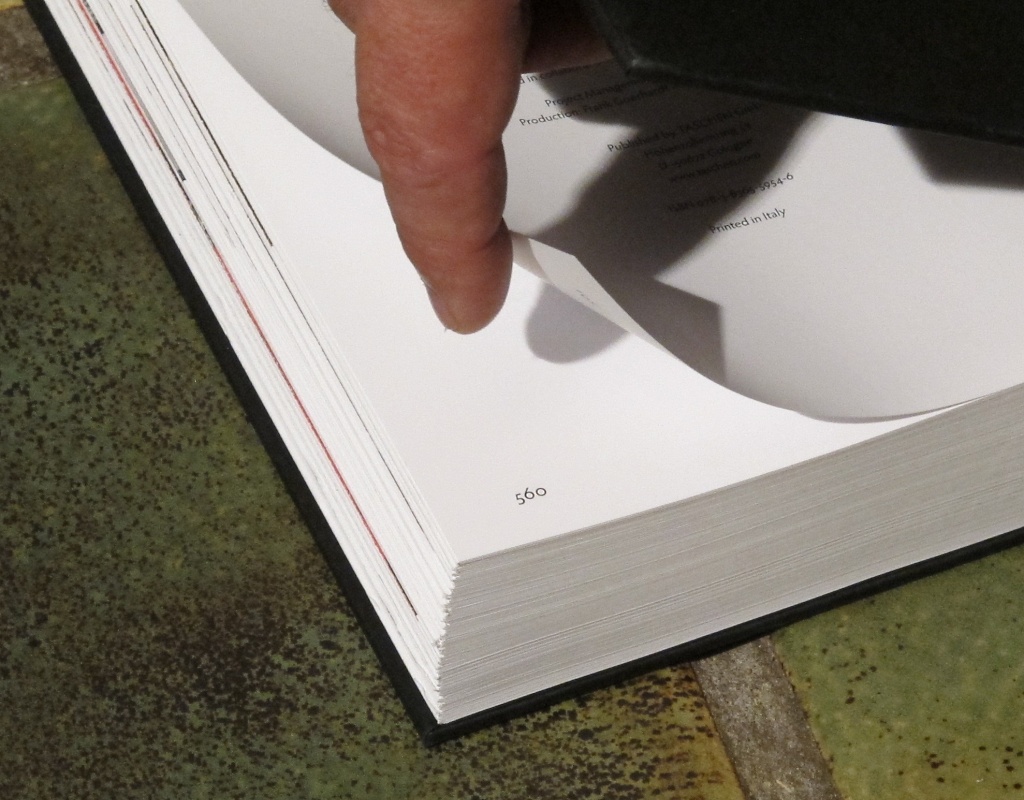 Check this out folks: a whopping 560 pages.

Finally, here is a size comparison. Note that the Blu-ray isn't part of the book, I just put it there to provide a sense of scale.
.