Want To See KICK-HEART? In The US Or Canada, Now You Can 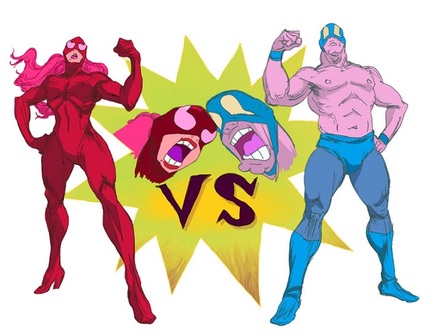 Last year saw the release of Yuasa Masaaki's Kick-Heart, the first anime short to be funded through a Kickstarter campaign. Made at the famous Production IG studio and with Oshii Mamoru attached as an executive producer, the end result was still a piece of typical Yuasa Masaaki brilliance: colorful, sexy, and funny, with great music.

However, it being an animated short made it difficult to find, unless you were involved in the Kickstarter campaign, or happened to visit the right festival. The good news is: this has now been remedied for the US and Canada. As of yesterday, Kick-Heart is available through Vimeo on Demand.

In Kick-Heart, a wrestler has to fight a charity match against a sadistic female wrestler. When she discovers he is secretly a masochist, the rematch turns into a heated, if forbidden, affair indeed.

My review last year was wildly positive, so it will come as no surprise that I recommend everyone to go see this.

Also check out the interview we had with director Yuasa Masaaki, in which he discusses the making of Kick-Heart and his unique approach to cinema.