Ard Vijn
Editor, Europe; Rotterdam, The Netherlands (@ardvark23)
Tweet Post Submit
(Did you know there were Perfect Blue Trading Cards? Neither did I...)

Me being a fan of anime director and artist Satoshi Kon isn't exactly a secret. I was very much shocked by his death five years ago, first because it was so unexpected and second because he was still so young. I'm actually older now than he ever got to be. I wrote his obituary here at this site (one of the crummiest, yet most heartfelt things I've ever written), and last week I dedicated our weekly "Have Your Say" series of discussions to the anniversary of his death.

Recently, several of Satoshi Kon's manga were released in the west, like Tropic of the Sea, his collection of short stories Dream Fossil, the meta-manga Opus, and his collaboration with director Oshii Mamoru (acting here as co-writer) Seraphim: 266613336 Wings. The last two of these titles were distributed by Dark Horse comics, and they have now also released a 140-page hardcover book which collects several of Satoshi Kon's most beautiful artworks.

Truth be told I was circling this book like an indecisive shark, kinda unsure of whether I should or shouldn't pounce. At just 140 pages, how much could there be in there? And didn't I already own a lot of it through other releases? But then a friend actually bought it, and sent me some pictures of it online, showing how gorgeous this release is. That settled it: I bought it and... well, time for a review!

The Art of Satoshi Kon is basically an updated reprint of an earlier book, which was released in Japan in conjunction with an exposition of Satoshi Kon's artwork. As such, most of its pages are filled with large pictures, like the poster art of his films, created for marketing purposes. Many of these are very beautiful, and some are unavailable or even unknown, unless you own several different releases of each of his films.

The book is mostly textless. Satoshi Kon's comments on most of the artworks are in the back, and these are fun to read, but this is all about the pictures. Darren Aronofsky's tribute is mentioned on the cover, but to be honest it's just the short condolence note he wrote upon hearing of Kon's death.

As most of the art in this book was part of a specific exposition, it doesn't provide an even representation of his anime output. Perfect Blue and especially Millennium Actress fare best in that regard, but his series Paranoia Agent only gets four pages, and Paprika not much more.

But by now it may seem I'm slamming the book, and that is definitely not my intent. For its price, it provides a lot of great and unique looks at artworks of Satoshi Kon I was unfamiliar with. Early experiments, commercials and advertisements, private tinkerings... what's there sure is worth looking at. And the many works I did know already, I hadn't seen yet in this size and gorgeous print quality. The fact that I want more is... well... let's face it: I'd always want a lot more of Satoshi Kon art anyway.

In short: if you're a fan of Satoshi Kon's drawings and paintings, this is a no-brainer. The Art of Satoshi Kon has been released in August both in the UK and the US, so go get it.
I'll end this review with a gallery of pictures of (and from) the book, so you can get an idea about just how good it looks.


(And a special thanks to Kris Van Damme for alerting me!) 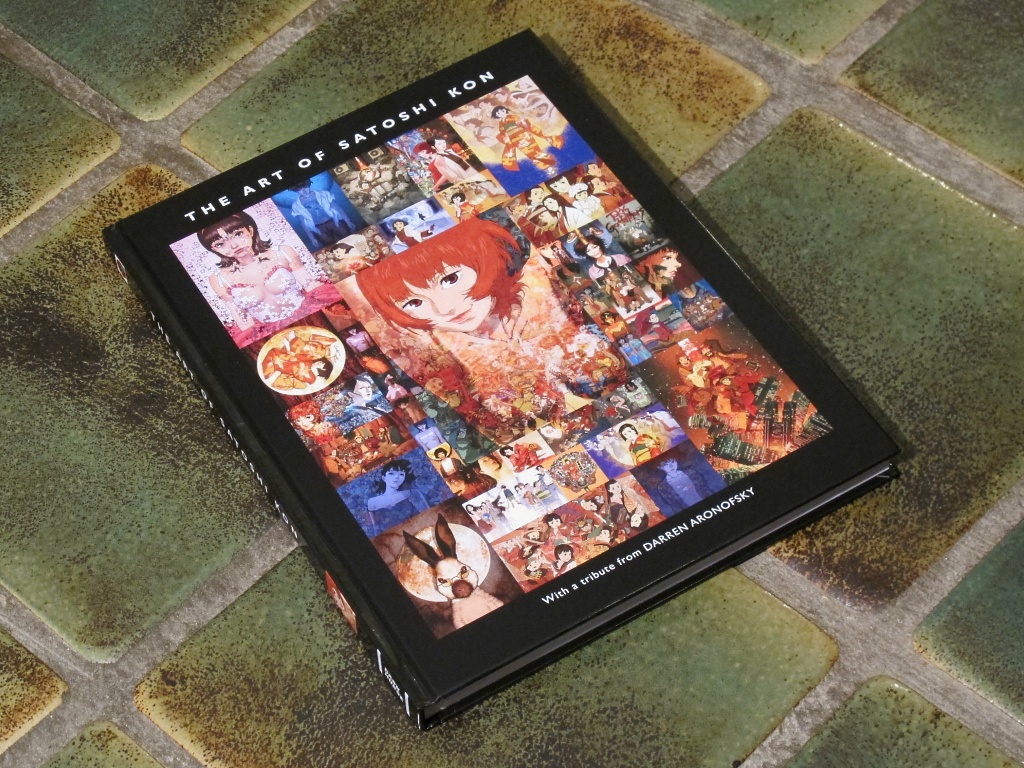 Click on the edges of a picture to move to the next, or in its center to see a bigger version! 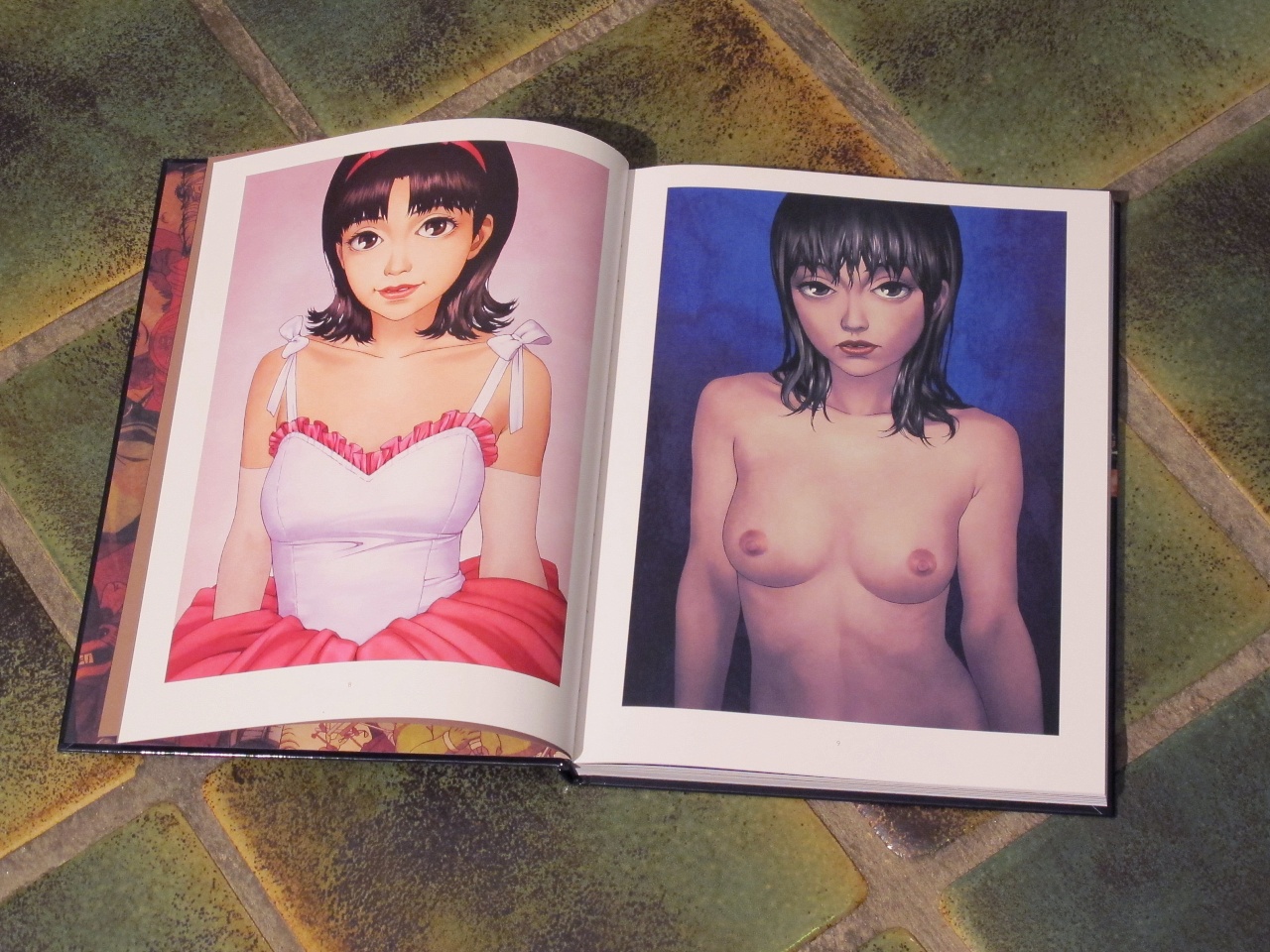 His debut film Perfect Blue is well-represented here, including the spectacular covers made for the brilliant packaging of the Japanese Blu-ray/DVD releases in 2008.

(If you're on Facebook, you can get a closer look at that packaging in our forum there.) 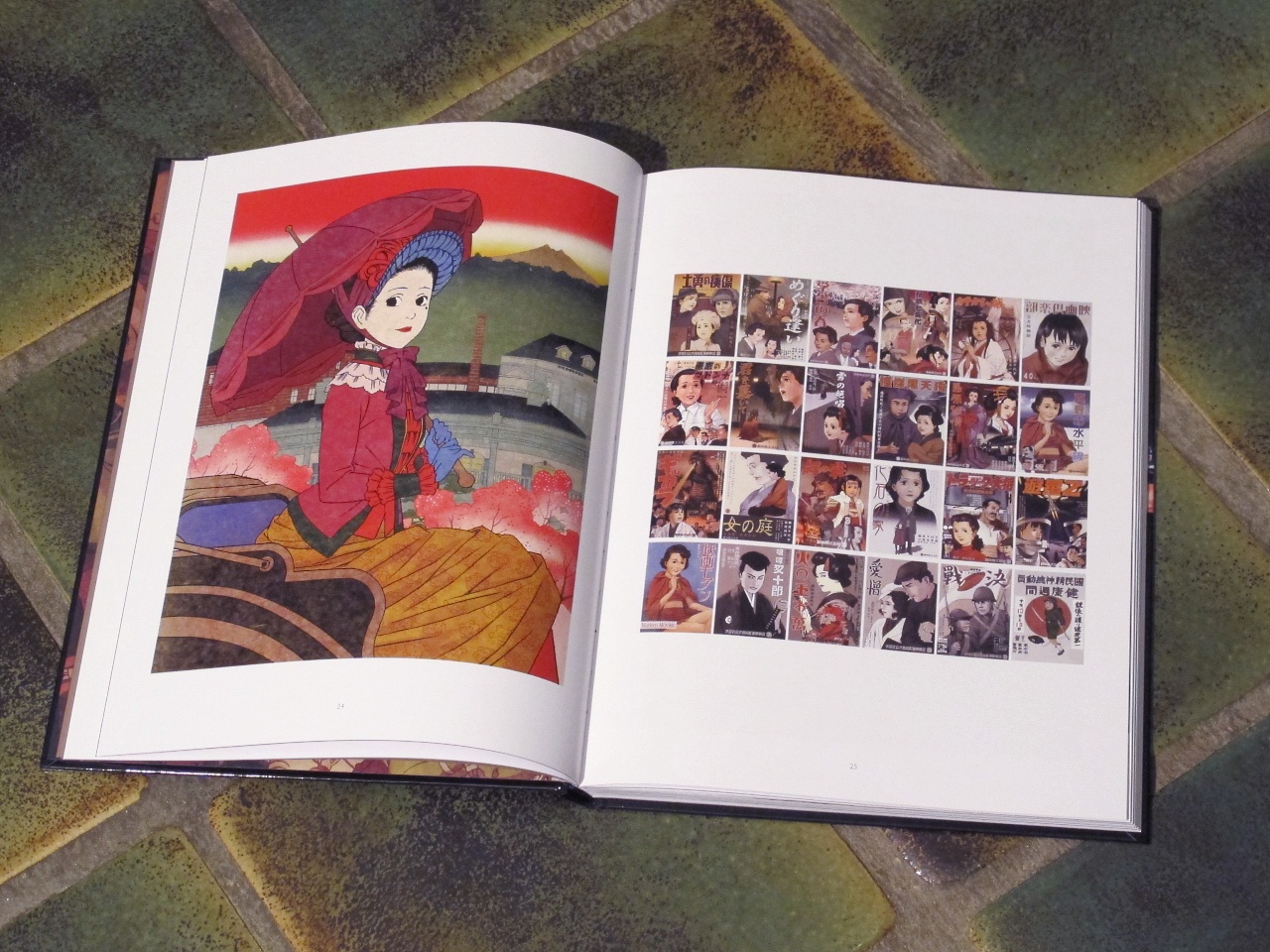 Best represented of all his films is Millennium Actress, including several two-page spreads and this collection of the many fake movie posters used in the film. 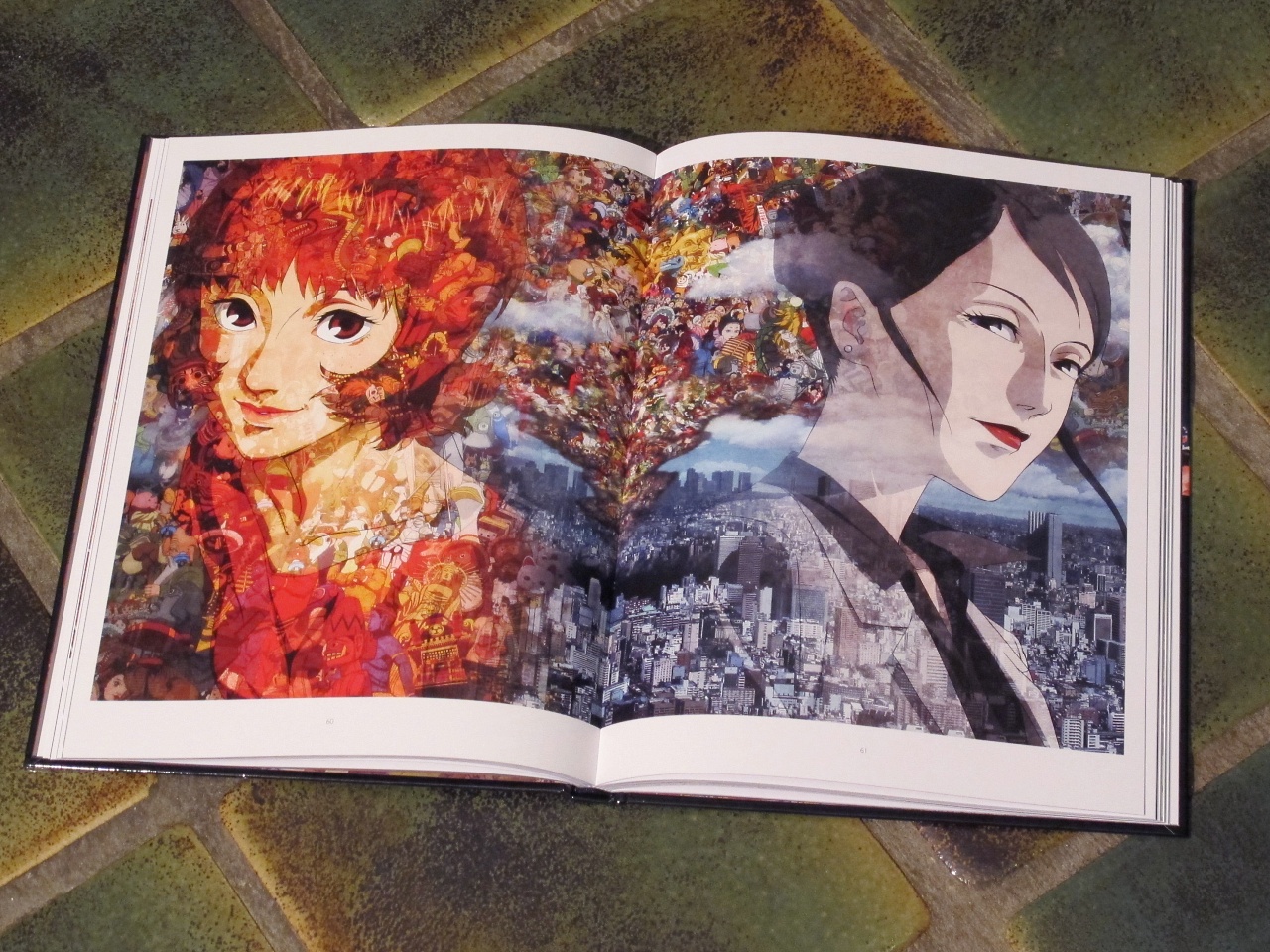 There aren't many artworks of Paprika in this book, which is a bit of a shame, as Satoshi Kon created a lot of the art in that film. Kon is even being teased on the commentary track of the Paprika Blu-ray, about him not understanding that as director he is not supposed to do so much of the background-drawing himself.

Having said that, this two-page spread almost warrants this book's purchase all by itself. Again we're talking about a piece created specifically for the Japanese special edition DVD packaging, and it is great to be able to peruse it at leisure, at this size, without any titles obscuring the artwork. 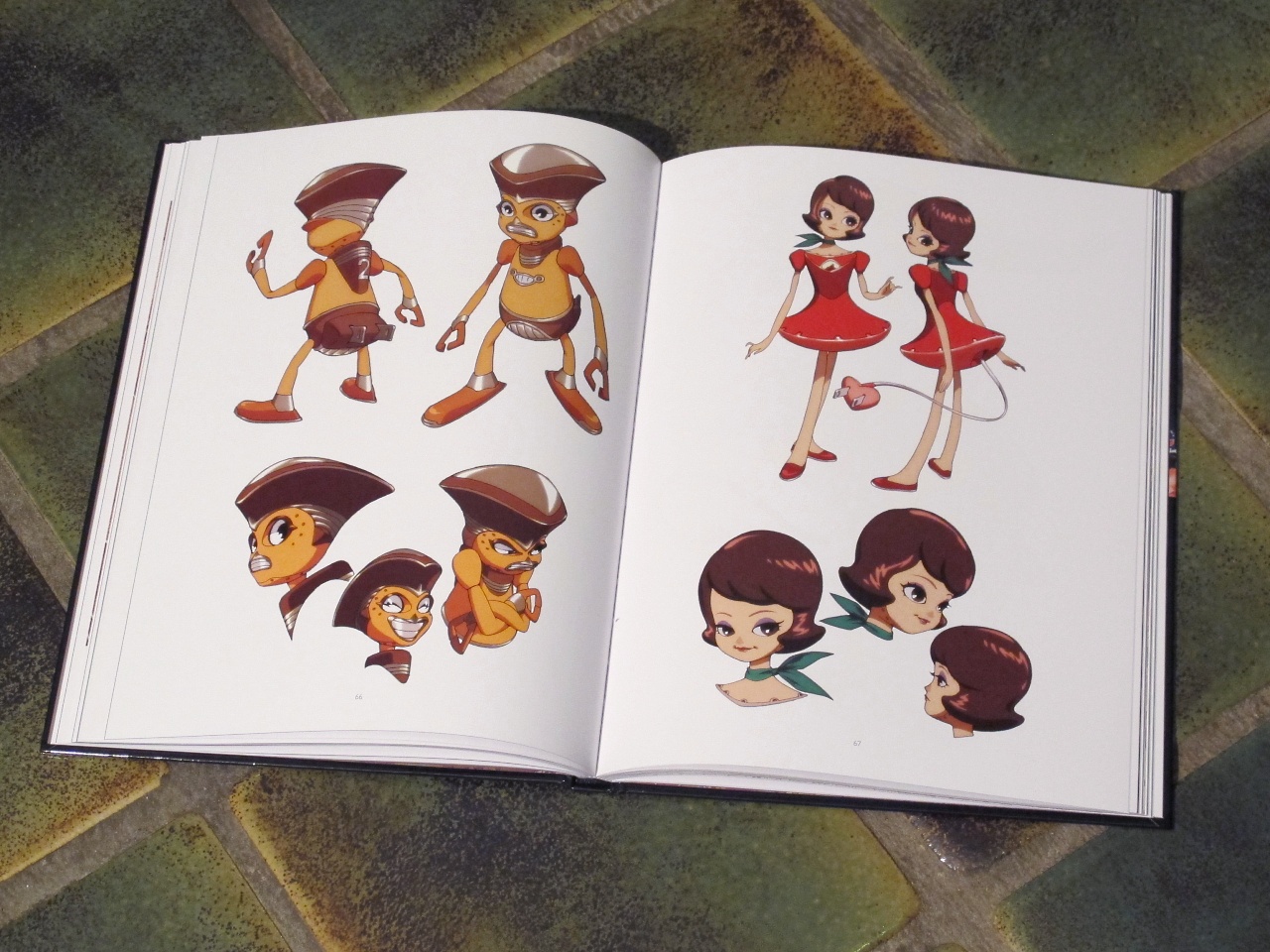 While most of the book is a reprint of a catalog for an older Satoshi Kon exposition, there is some new material added, including these designs for his unfinished work The Dreaming Machine. 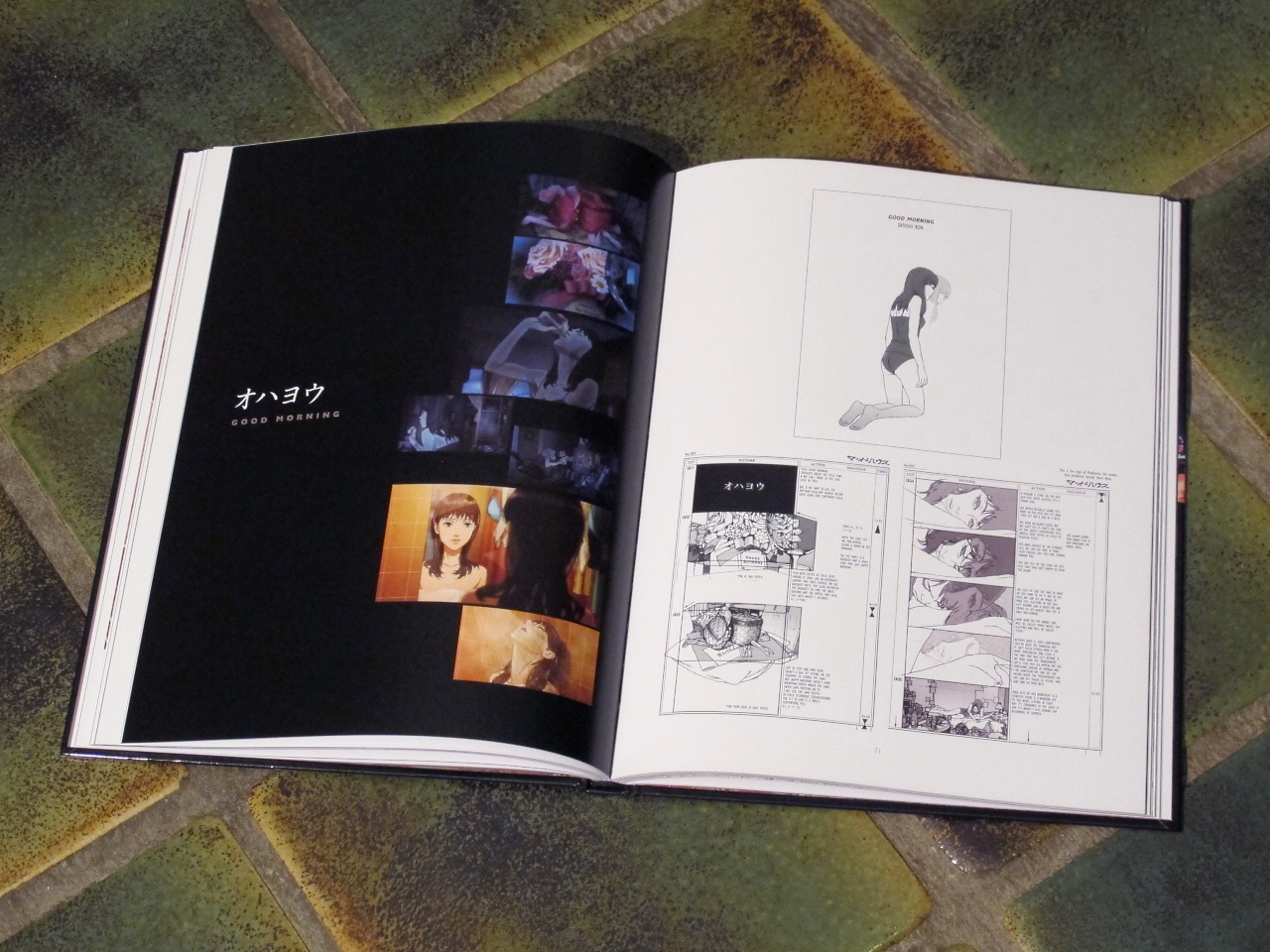 It's not all paintings and drawings: included is a chapter with the full storyboards for his 2008 short Good Morning, which was his segment of the Ani*Kuri 15 project. 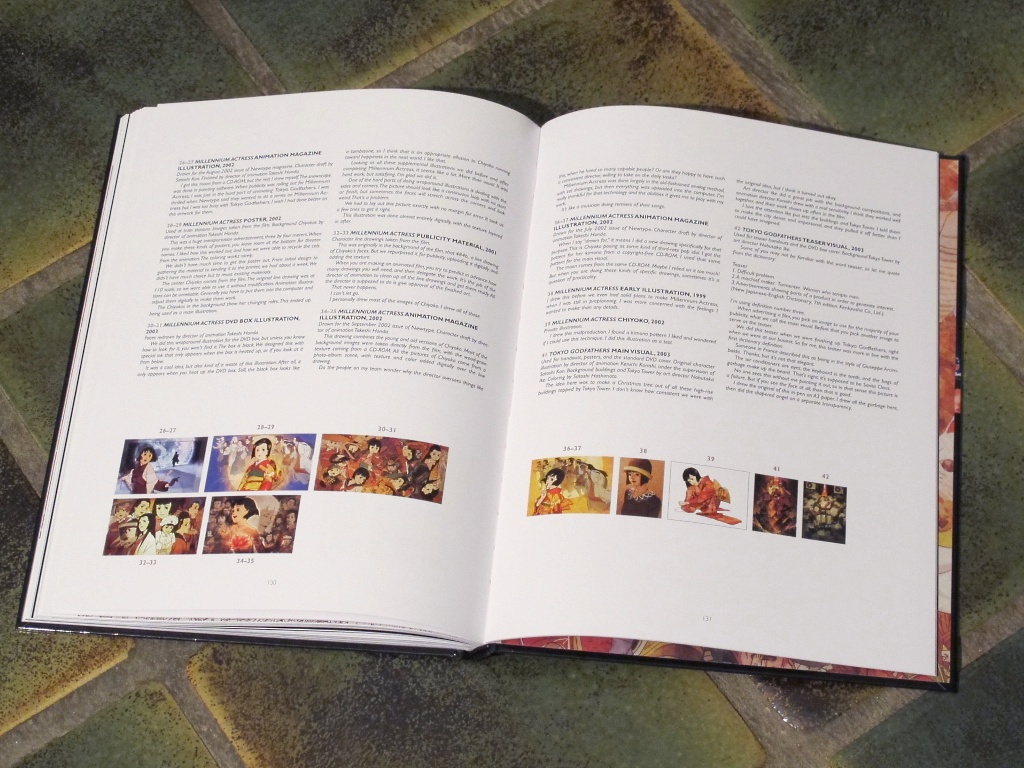 Except for the artworks added after his death, each picture has commentaries added by Satoshi Kon himself. These were the picture title commentaries used for the Satoshi Kon exposition, and make for a fun and self-deprecating read, as Kon never took himself very seriously as an artist. 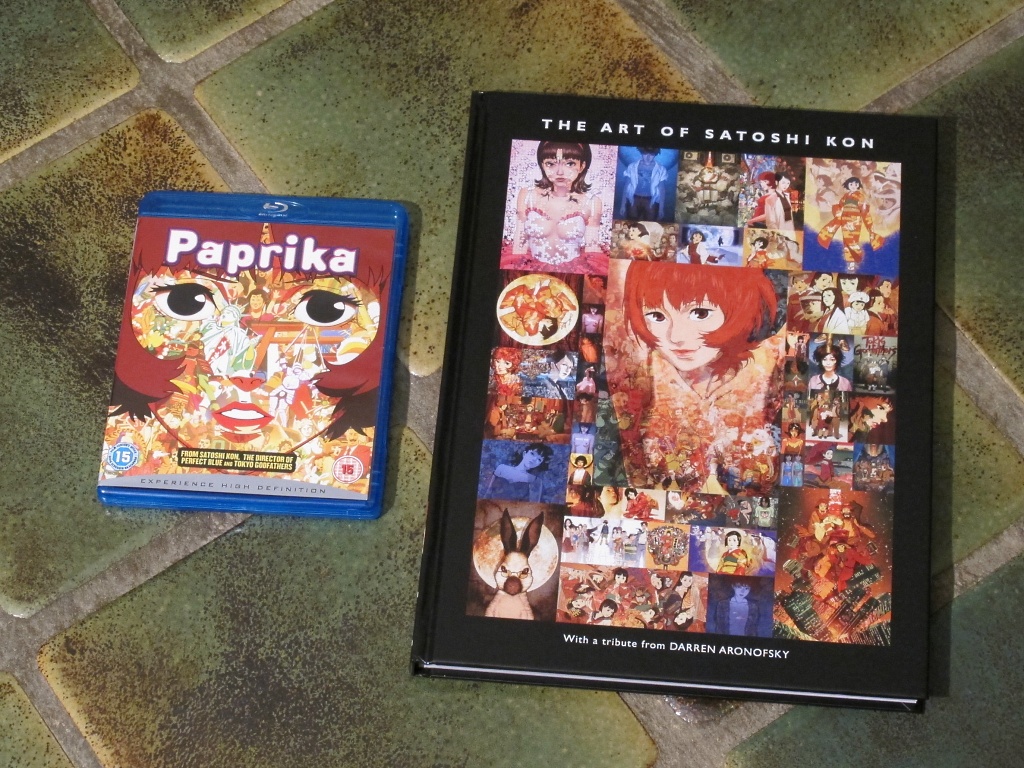 Finally, a size comparison.
Note that the Paprika Blu-ray isn't released with the book, I just put it there to provide a sense of scale 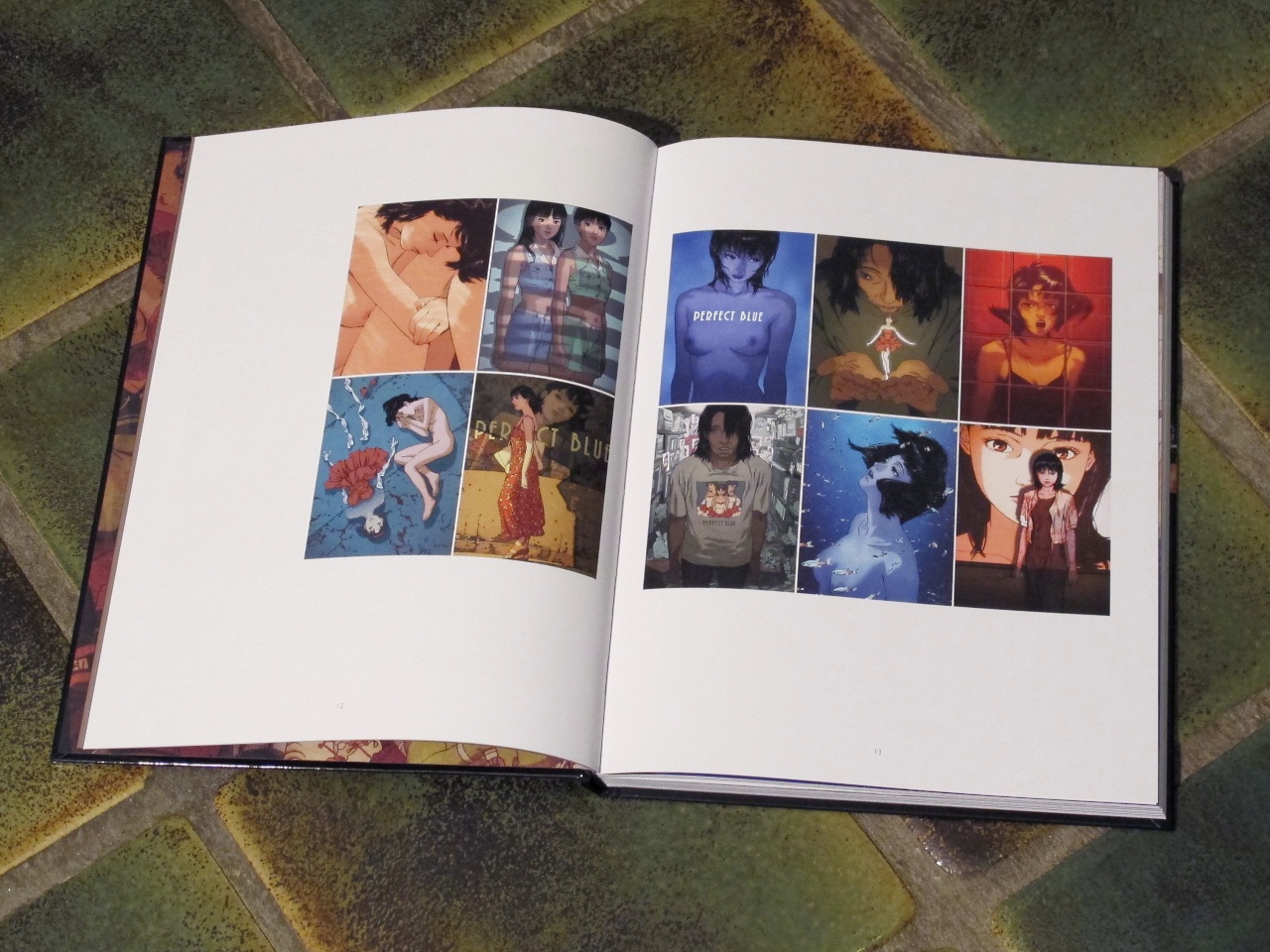 Aww... at the start of the article I did kind-of tease a bit with that comment about Perfect Blue trading cards, didn't I?

Well, believe it or not, these did actually exist, and here is a glimpse at them. Respect to your prowess as a collector if you managed to get a full set of these (if you did, congrats, that is one HELL of a collectible you've got there!), as even Satoshi Kon didn't own a full set.

Fun note: Satoshi Kon later tinkered with (and re-used) many of the pieces he created for the trading card set, and several of these card-artworks make updated appearances later in the book.