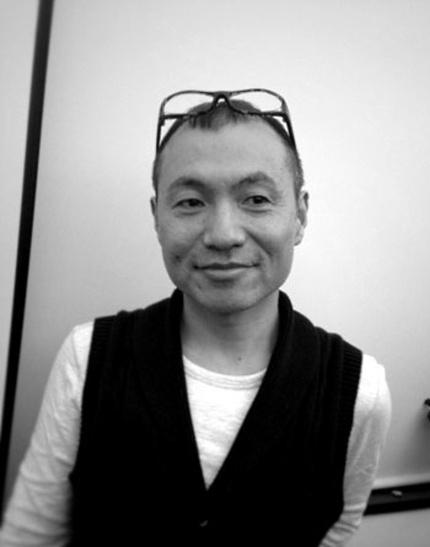 Last month, Peter van der Lugt and I were given the chance to interview anime artist and director Yuasa Masaaki, following several festival screenings of his crowd-funded short film Kick-Heart. Saying that we are fans of his work is an understatement: we both consider him to be one of the most unique, daring and brilliant animators working today, worldwide. Whether it is his epic science fiction series Kaiba, his bizarre film Mind Game, or indeed a short like Kick-Heart, his versatility and fantastic creative force shines through.

The interview was held through Skype, with Yuasa-San being in Japan with two of his co-workers present: Eunyoung Choi and Tom Hudson, who both helped with interpreting and technical details. The interview turned into a pleasant conversation covering several subjects, so we've split it in two parts. This first part is about Kick-Heart, about to be shown at Fantastic Fest and Camera Japan Festival.

In Kick-Heart, a wrestler has to fight a charity match against a sadistic female wrestler. When she discovers he is secretly a masochist, the rematch turns into a heated, if forbidden, affair indeed.
As it is a short, and a very accessible one at that, during the interview we didn't dive into the story or its meaning. Rather, we were interested in how the short was greenlit and funded. And this is where the interview starts...


ScreenAnarchy: Thank you for taking the time to talk with us. And congratulations on the release of KICK-HEART, which we think is a wonderful short film. It is already picking up awards in several places. How has the general reception been, so far? 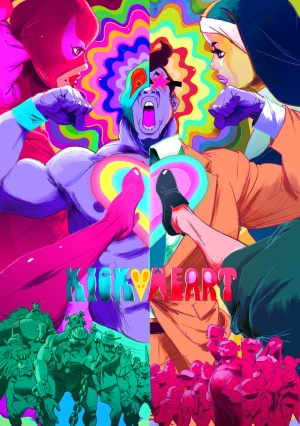 Yuasa Masaaki: So far, we've had really nice feedback, and people like it. I don't know, I only hear from the people who write things, and they have written nice reviews. We all are glad that people really liked it.

KICK-HEART has been made by a very international team. Justin Leach produced it, you directed it, the other people in your team are from all over... How did this come about?

Ehm... Because I'm me? [we all laugh]
There are many people I've worked with, or who I admire, and how it works is... you tend to keep in contact with each other. This time we had a chance to work together, a possibility, so we got together on Kick-Heart.
It's like... when Eunyoung hadn't been here today, we wouldn't be able to have this interview. She isn't a professional interpreter, but nevertheless she makes it possible to easily make contact with people outside Japan. The team just assembled like that.

If you all already knew each other, what made you choose studio Production I.G. for this project? In the past you often worked with Studio 4 Degrees and studio Madhouse.

Prior to Kick-Heart I did some work at Production I.G. already. When I discussed this project with their CEO Ishikawa, Justin appeared and said: "Shall we try to get this started?" And so it happened.

Was it also Justin Leach who suggested using Kickstarter for funding?

Yes, that was totally Justin. And it turned out we didn't know ANYTHING about using Kickstarter. [we all laugh] In the beginning it was all a little bit scary, it was such a new thing. But in the end, eventually we were like, this was probably the only way we could get this film made. So we thought "We don't know if it's going to be a success, but let's try."

As far as we know this is the first anime financed through the Kickstarter crowdfunding platform. What was that like, and will you keep using it?

I do want to use it again sometime. Not just because we succeeded in getting the funding, but I also liked the direct communication with the fans throughout the making of the movie. I had a good experience with Kickstarter.

One of the first credits appearing in KICK-HEART is Oshii Mamoru, the director of the Patlabor and Ghost in the Shell films, as a consultant. What was his role in KICK-HEART?

He was not really involved in any specific aspect of Kick-Heart, it was rather that he advised us within Production I.G. on which direction to take, for example how commercial we should make it, or how experimental we could get. The unique parts of the story in Kick-Heart were discussed between CEO Ishikawa and Oshii Mamoru, what would be going on with creating such a short, things like that. And occasionally he'd drop in to say we should really go for it, which was good! 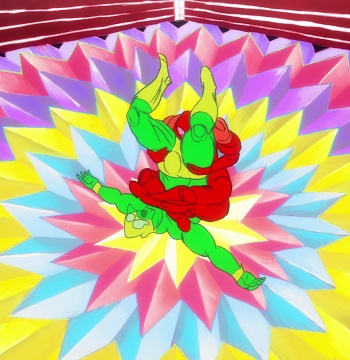 There are some aspects in KICK-HEART which are very much apparent throughout your body of work. Like the often abundant, extreme use of colors, to beautiful effect. The artwork in (for instance) THE TATAMI GALAXY, or MIND GAME, relies so much on this aspect. How do you design that? Is that done far in advance or do you try this out during animation?

[thinks long] Normally I think about story first, not design, color, things like that. After the story I work on the concepts, but most ideas come up just after doing the storyboards. That's when I think of color, and how to stage the scenes, the real design. This all happens after I've finished the storyboards.

Can you elaborate a bit on your way of working? For instance, Miyazaki Hayao uses a tiny bit of storyboard and works out the rest of the film from there, letting it grow. Do you work in a similar way, or more rigidly?

No, I have the script and story finished before starting on the storyboards. But the core of the designs then develops from the storyboards, that part may be a bit similar to Miyazaki-san. After the storyboard stage I evaluate these parts.

I know what I do differently though. Normally after the script stage, people already start with the set-design before doing the storyboards. For example the look of a house, a room, a cell, a town, everything. What I seem to be doing different from other people is that I do not use such a set when making the storyboards. I keep myself open to design changes until after this stage, but during the storyboards nothing like that has already been decided. I often still adjust things or get new ideas.

Speaking of new ideas: the Kickstarter campaign easily raised enough money for KICK-HEART, and the short ends with "See You Soon". So do you already have a sequel in the making?

I have a whole lot of ideas for a sequel, and I keep thinking about making one, but we haven't set up anything yet. I don't know if it has a future. But I am thinking about several ideas.


That more-or-less concluded the subject of Kick-Heart specifically, so we leave you with its trailer.
Next up in Part Two: film, music and eroticism!

Do you feel this content is inappropriate or infringes upon your rights? Click here to report it, or see our DMCA policy.
animeKick-HeartMamoru OshiiMind GameTatami GalaxyYuasa Masaaki