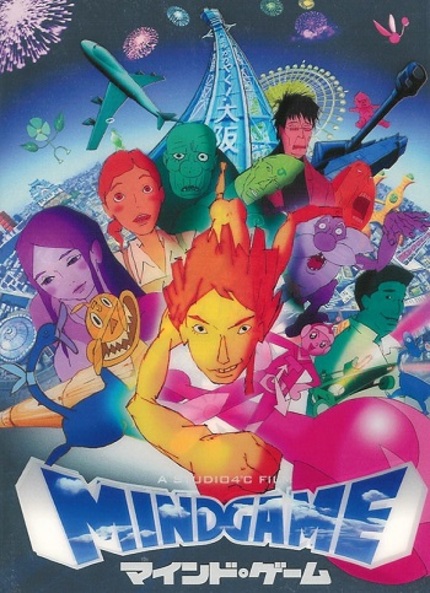 On the Western end, Scottish distributor Anime Ltd and their French co-company All The Anime are helping Studio 4°C with a Kickstarter campaign, one which reached its initial tier almost within one hour. Better think up some more stretch goals and reward perks, good people from Anime Ltd! My crowdfunding-sense tells me you'll need them.

Yuasa Masaaki is one of the greatest artists currently working in animation, and his films transcend what's regularly known as anime. Mind Game is seen as his masterpiece, and the great Bill Plympton called it "one of the most important films of the decade". It's about life, and love, and includes what may be the best animated sex scene of all time. Peter and I were lucky enough to interview Yuasa Masaaki a few years ago, and rest assured we discussed Mind Game with him in some detail (read part one here and part two here).

This is also the sort of film I've not-so-gently been asking Criterion to look at. But hey, now Studio 4°C will be doing it by themselves... with a little help from fans.
Intrigued? You should be!
So check out the Kickstarter page and have a look.