Currently I'm 47 years old, and it's safe to say that for 39 of those years, I've been collecting stuff about Star Wars. Episodes IV, V and VI of that franchise have had a strong hold on me, and I'll avidly defend their merits when confronted with non-believers.
As such a fan I was fully aware that while George Lucas was the father of the Star Wars universe, artist Ralph McQuarrie could be seen as its mother. Involved with the Star Wars project from the very start, McQuarrie's designs would shape much of what has become iconic about the series. In my collection I have many articles about his work, and copies of his famous paintings.

So when I heard a year ago that publisher Abrams Books would release a big picture book about Ralph McQuarrie's Star Wars artwork, my interest piqued. That interest turned to dismay once I noticed the intended price-tag, but the dismay turned back up into elation when I read that the book would have a whopping 800 pages!

After some see-sawing between "ooh-expensive" and "wannawannawanna" I decided to pre-order and, well, wait it out to see what happened. I mean, 800 pages? Really?
What happened was that the book started to look better and better, while its price nearly doubled. Then, last Thursday, it finally arrived (luckily for its original price, thank heavens for pre-ordering...), and I have been totally smitten with it ever since. In 2015 my favorite film-related bought item turned out to be a book, and unless this year throws me a massive curve-ball in its last three months, this will be true for 2016 as well.

For Star Wars Art: Ralph McQuarrie is awesome, and incredibly comprehensive. Looking through my old collection, I have yet to find a single image which is NOT in this book. And with 800 pages, rest assured there is an enormous amount of pictures I've never seen before.

Written and edited by Brandon Alinger, Wade Lageose and David Mandel, the huge tome chronologically covers the first three Star Wars films and Ralph McQuarrie's artistic involvement in them. For text, they use descriptions and many outtakes from interviews, not just with George Lucas, Ralph McQuarrie and special effects legends like Dennis Muren and Phil Tippett, but also directors like Christopher Nolan. And there's lots in there I didn't know yet, which is (ahem) no mean feat.

And while the book remains very much on-topic, it's not just the three Star Wars films which get covered, as Ralph McQuarrie also designed some things for the infamous Christmas Special and the two Ewok films.

But the meat of the book is in the Star Wars images themselves, and those are gloriously rendered. I expected to see the famous ones, of course, but to my surprise Ralph McQuarrie had a habit of painting over previous paintings whenever he wanted to re-use a foreground or a group of people, so the version I was aware of is often only the final one. For many paintings, this book shows the different versions, which for me (as a knowledgeable fan) resulted in some revelations which made my jaw drop.

It's been my privilege to actually see talented designers brainstorm in real life (Richard Raaphorst and Sarina Reilingh come to mind...), producing and changing great art on the fly. This book brings me the closest I'll likely ever get to such discussions as they happened between George Lucas and Ralph McQuarrie.

So would I recommend this book? If you're any kind of Star Wars or movie design fan, the answer is YES, wholeheartedly. I realize I lucked out immensely by pre-ordering though, as it is a very, very expensive book. Would I have paid the full price for it in advance? Maybe not, and it would have left me pining for the book forever, muttering angrily. But now, owning it, if I could have spoken to an alternate version of myself who hadn't pre-ordered it, my advice would be "Do it, you won't be disappointed....".

Like with that other book last year, I'll end this review with a gallery of pictures, so you can get an idea about just how good this release looks.
Click on the arrow buttons at the edges of a picture to move to the next, or in its center to see a bigger version! 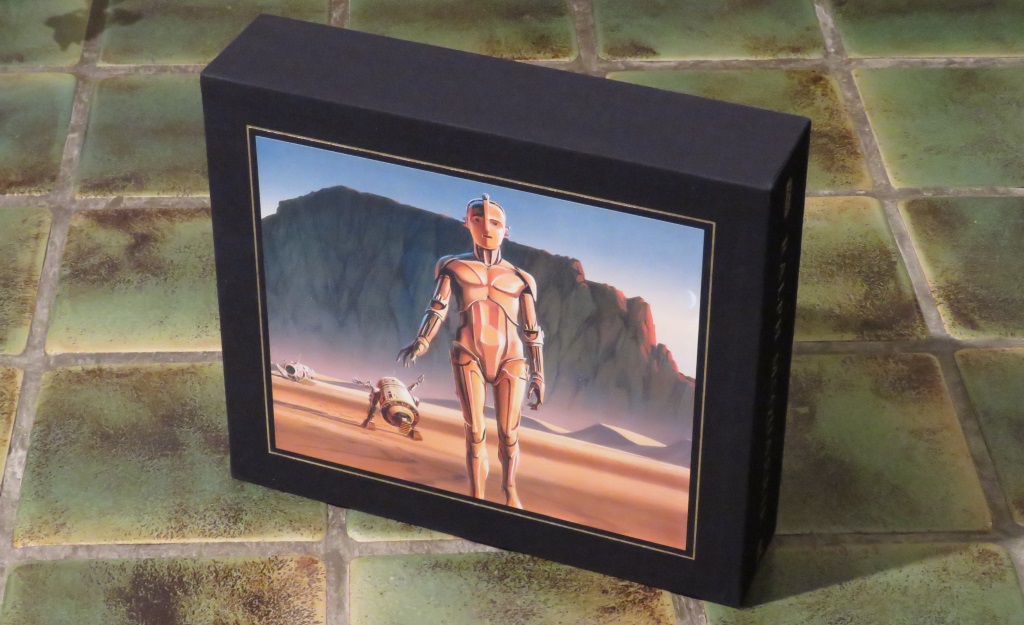 Here it is: a big, BIG cassette, with an early design painting of R2D2 and C3PO on the front. 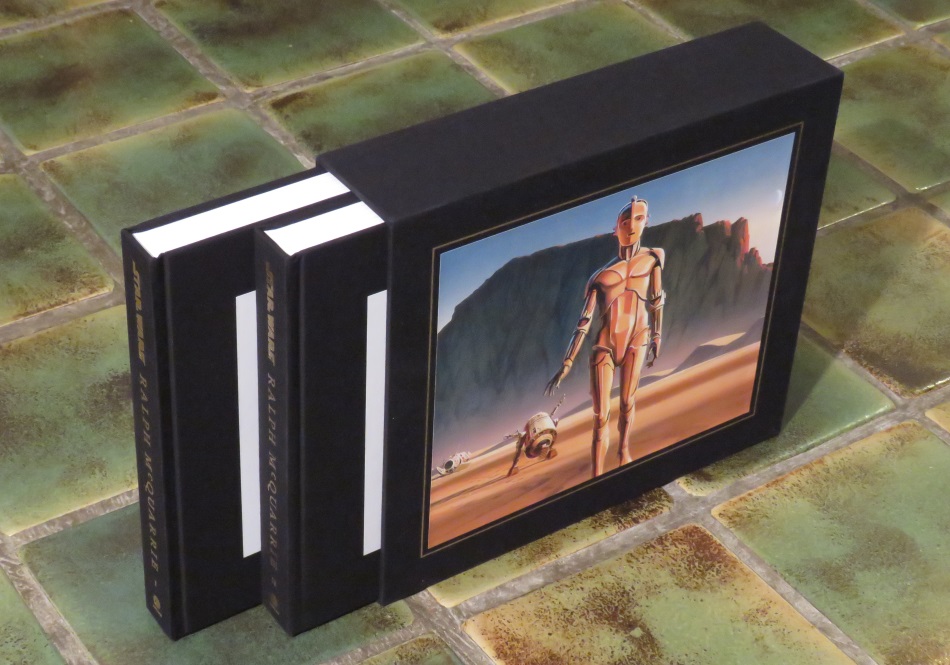 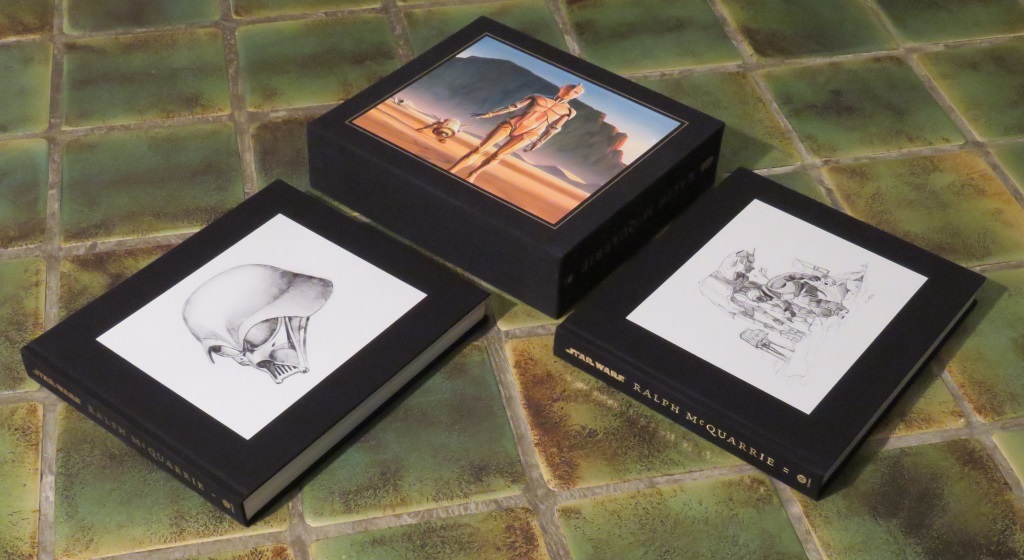 Both books taken out.

I've mentioned size a few times now already, but that is because it's such an obvious feature of this edition. When the mailman handed me the package and I took it casually with outstretched arms, I had to re-balance myself. As I went "WhooooaaaaAAA!" the mailman helpfully added: "Careful, it's heavy!"

So... yeah, the white packaging box it comes in states 21.5 lbs, and it ain't lying. If my fingers look strained in that middle picture, it's because holding even one of the books up like this means trying not to let slip over 10 lbs.

It's not just weight either. The books are freaking large, and at 400 pages each they dwarf nearby objects, like my head or a DVD. 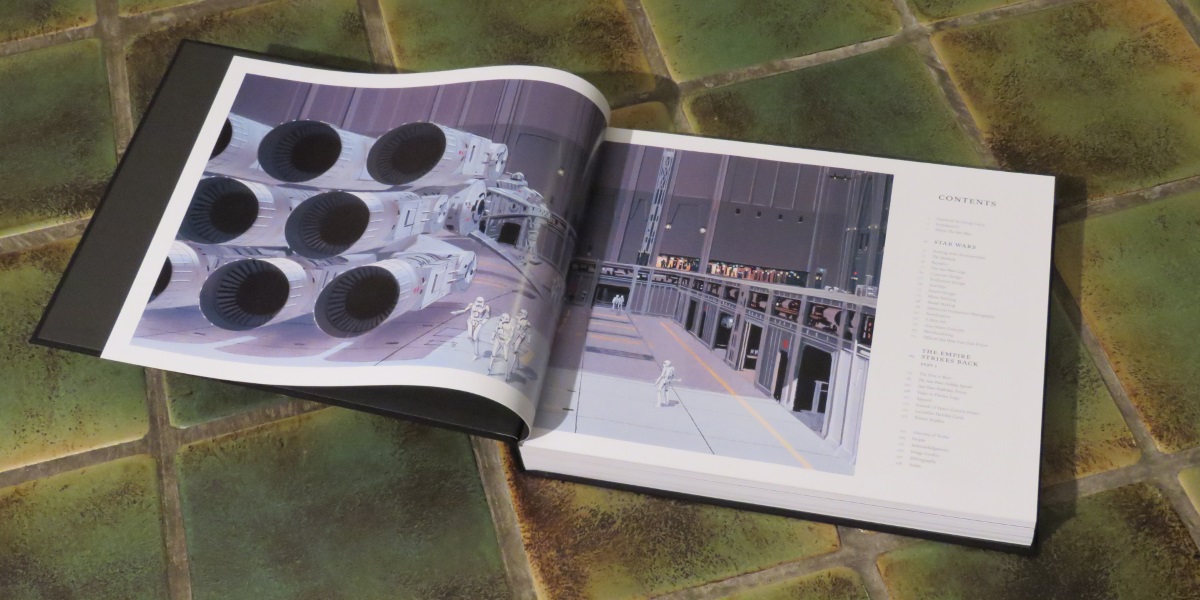 The first book covers the initial conception of Star Wars, and details the designing of the major characters and look of the universe. You'll see many sketches with Skywalker as a female protagonist, Han Solo with a cape, a white Darth Vader, stuff like that. That ship in the picture above is the Millennium Falcon, when it still looked like a rebel blockade runner.

Then, the book moves on to the actual production, the impact, the endless merchandise... and the starting up of The Empire Strikes Back, arguably the high point of all things Star Wars. 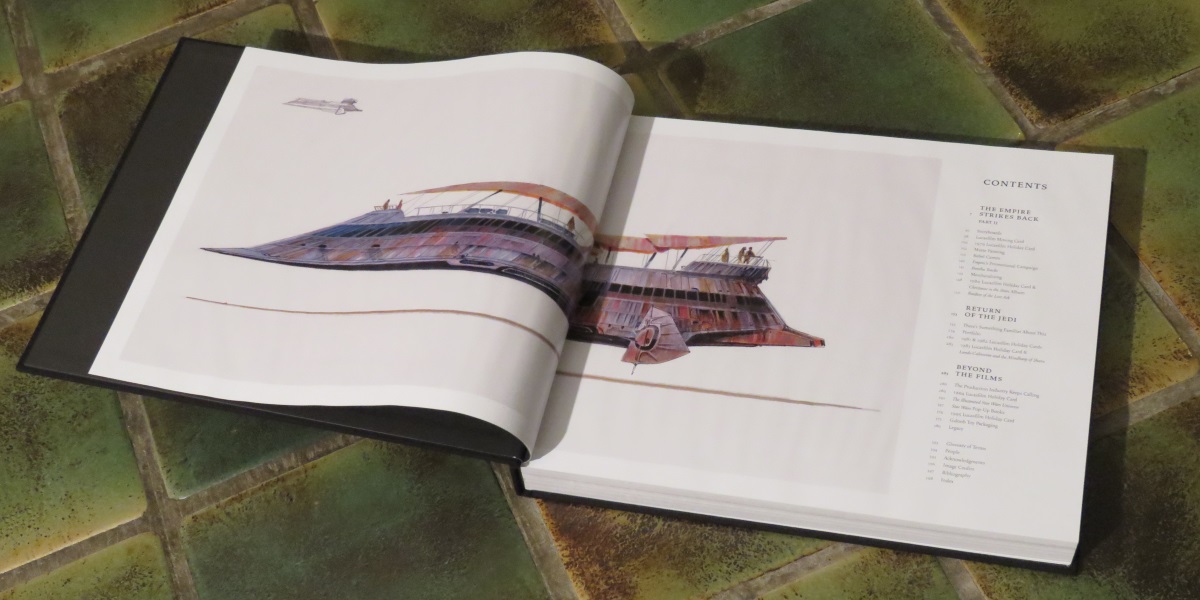 Book two covers the production and merchandising aftermath of The Empire Strikes Back, and the beginning of designing Return of the Jedi. That last bit is rather short, as Ralph McQuarrie's involvement with the final film in that trilogy was limited. He dropped out soon after pre-production started, citing he felt burned out after the immense workload of The Empire Strikes Back. 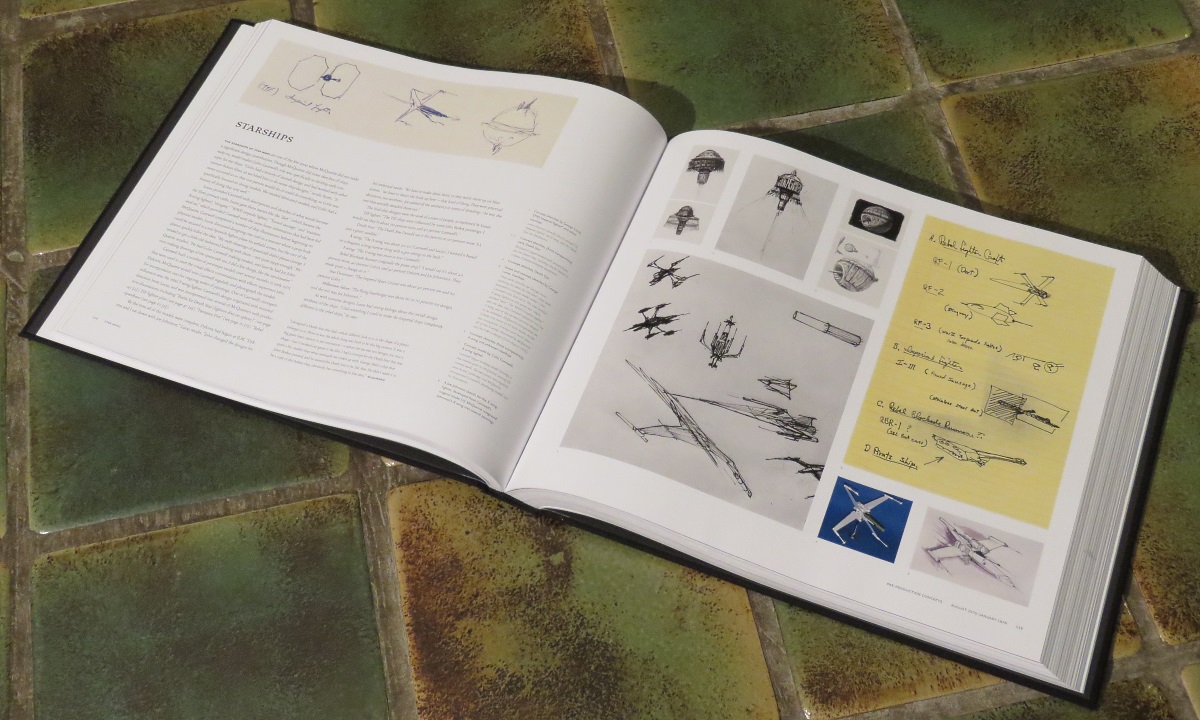 Here we see the very beginning of some of film history's most iconic spaceship designs. Thumbnail scratches, leading to more detailed designs. 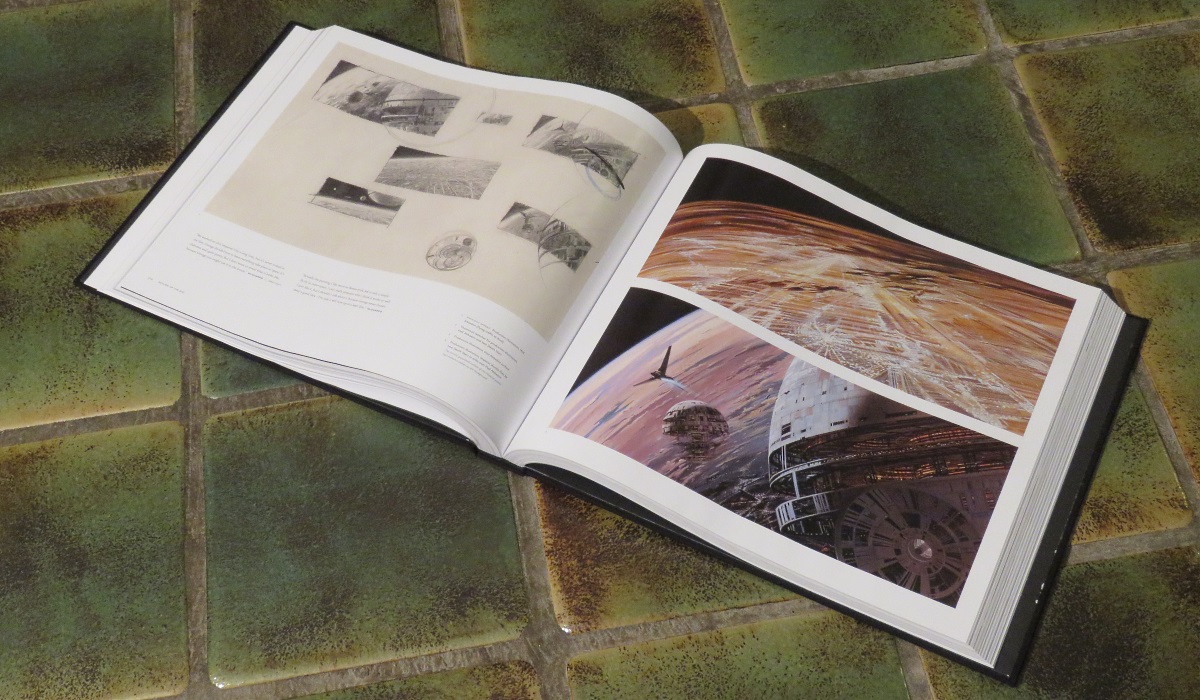 Most of the images in the book are far more advanced designs though, and production painting showing everyone what George had in mind. The book is a treasure trove of images, and especially the plotlines which were changed or abandoned are interesting, as they have brilliant design art attached to them which ended up not being used.

The book allows you to dream how alternate versions would have looked like. There's stuff about Luke fighting a giant white spider on Dagobah, there are unvisited planets, and here is a painting which shows the early idea of having two death stars built at the same time, which was George's initial solution to upping the ante for the finale of Return of the Jedi. 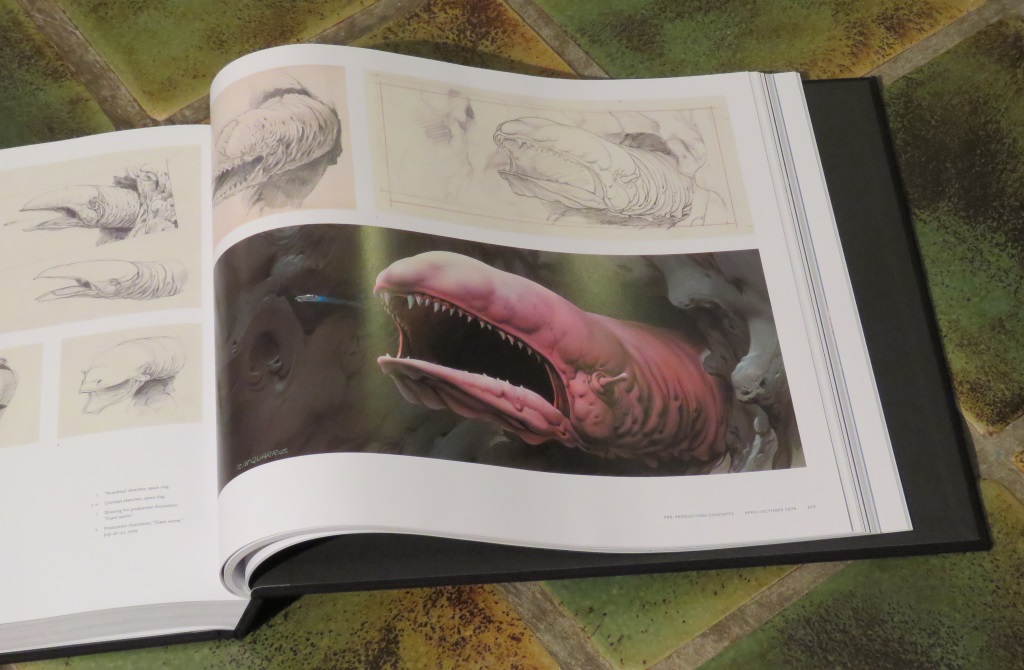 On the stuff that DID ended up being used, it is fantastic to see the conceptual changes leading to the final used version, like with the asteroid worm seen here. 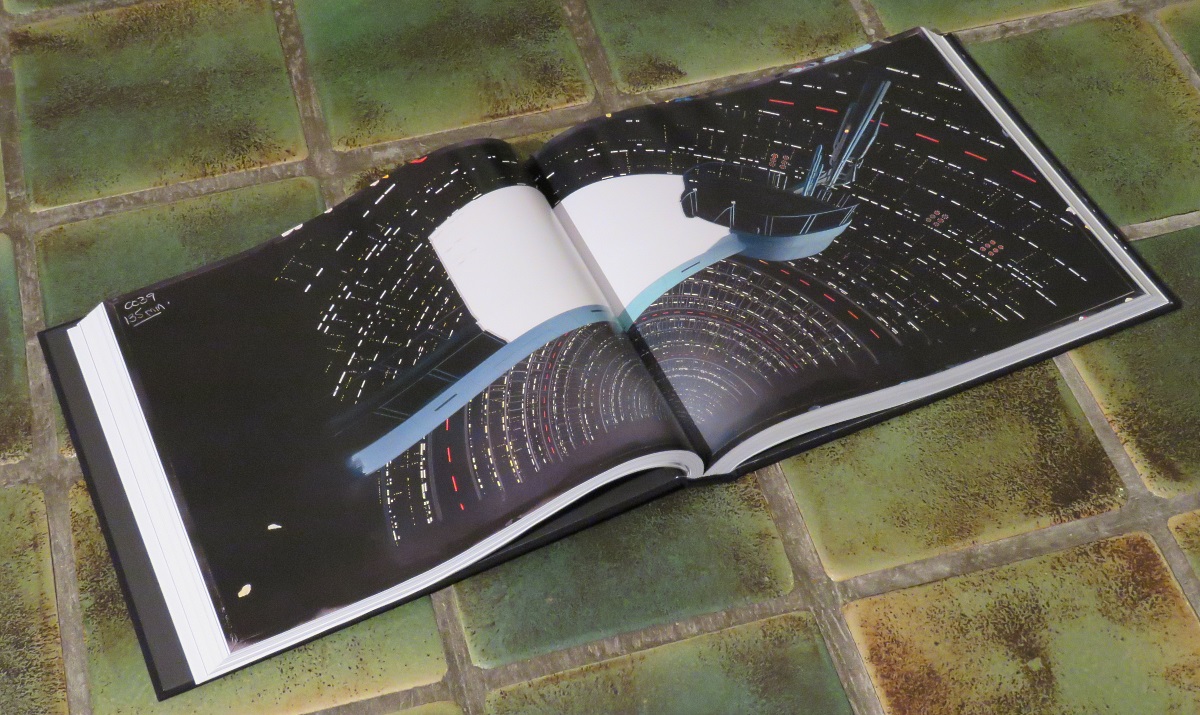 For both Star Wars and (especially) The Empire Strikes Back, Ralph McQuarrie created matte backgrounds actually used in the films. Here you see the Bespin ventilation shaft, and only the white area in the picture would end up being actually shot on set with actors. The rest is all painting. 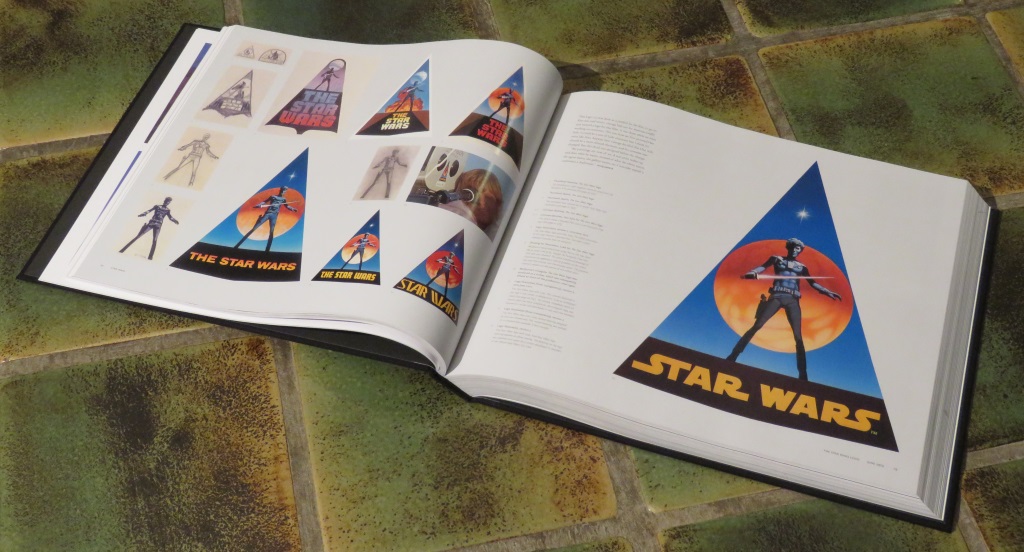 Here is the evolution of early pre-production logo art for what was initially called The Star Wars, and shows the iconic font popping up in the final version. 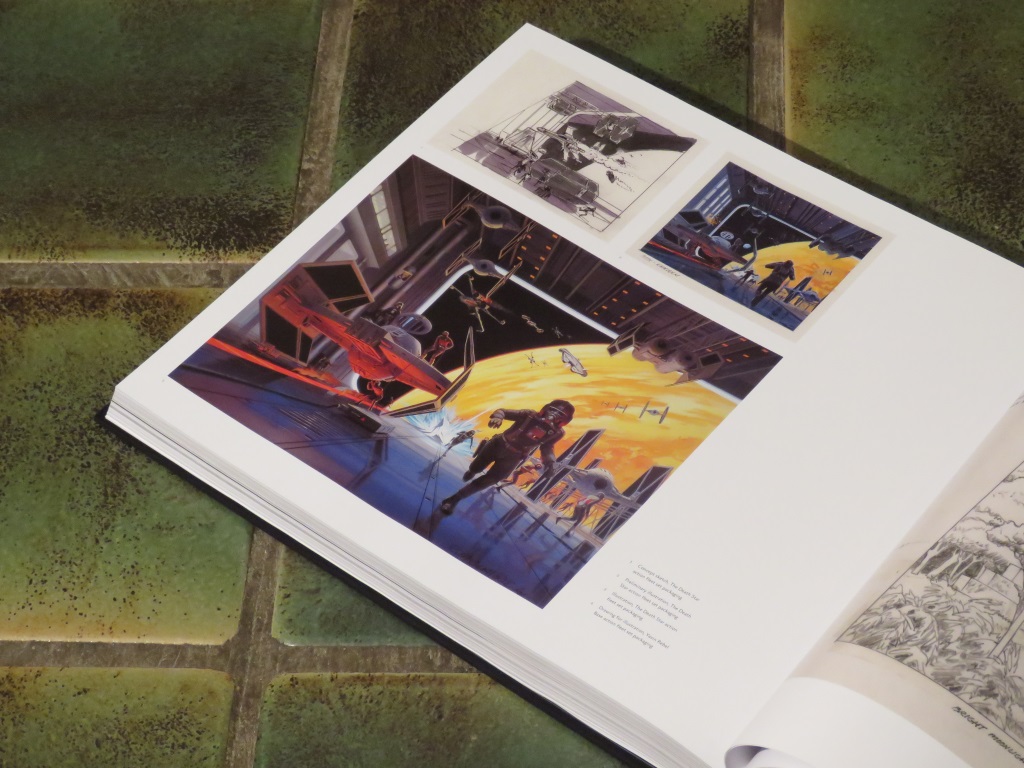 My mind got blown several times during the reading of these books. What I never knew was that many of the toys, games (very early videogames even) and adverts had artwork done by Ralph McQuarrie himself!

As someone who has lived through those years as a primary advert target, I had a big sense of deja-vu while flipping through the pages of those chapters. You literally couldn't open a magazine in those days without seeing some Star Wars adverts, and I was surprised to discover how many of those had actually been done by the great man himself. 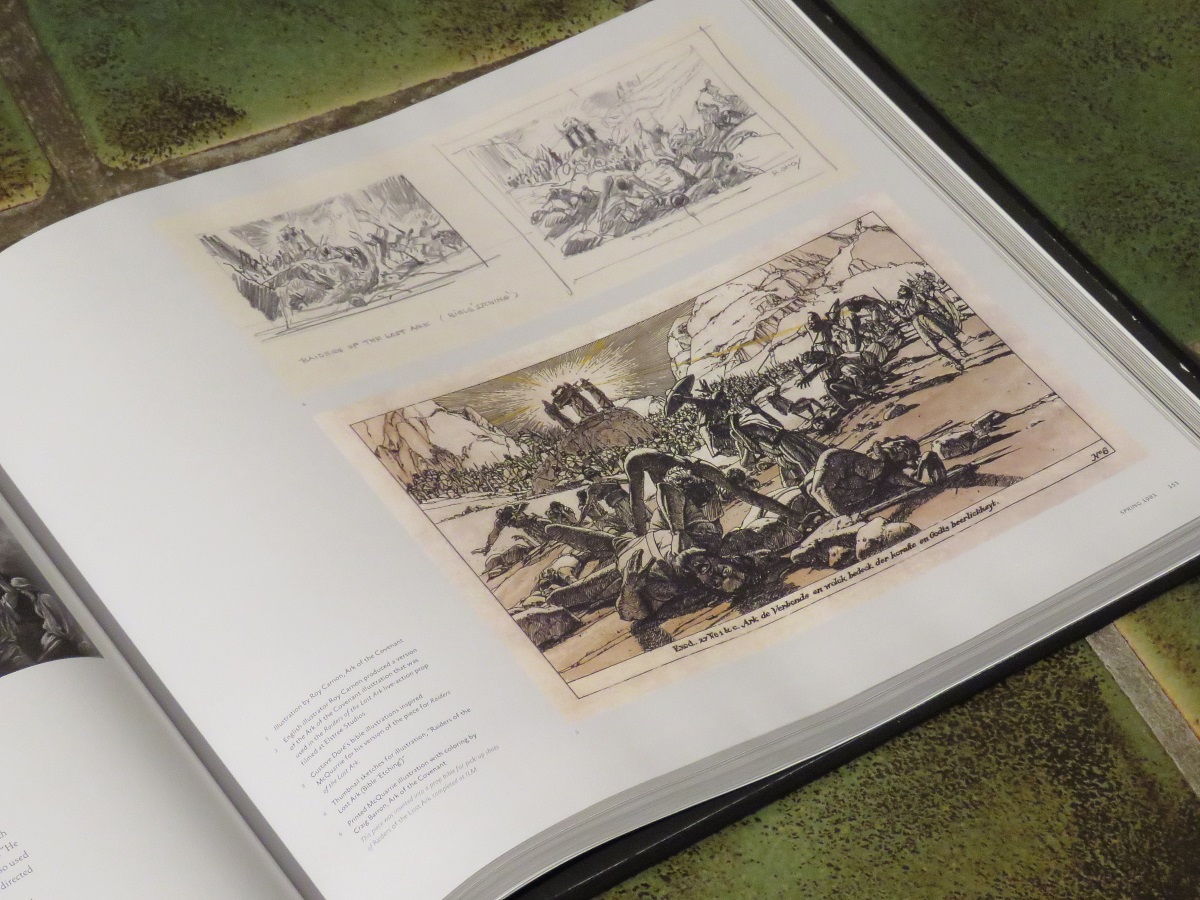 Another mind-blower: remember the scene in Raiders of the Lost Ark where Indiana and Marcus explain to the Government agents what the Ark of the Covenant is?

Well, the picture they use to show what the Ark looks like... is done by Ralph McQuarrie.

I'll finish this review with one last mindblower, and it's a good one. Rest assured the book is loaded with them, but this particular bit actually made me pop in the film's disc immediately, to see it for myself.

Remember the stomach-churning shot in Star Wars when the rebels dive into the trench on the surface of the Death Star? I knew that the trench was a very long model, which had a camera on a boom moving through it.

Then, the first half of the sequence was shot with a camera approaching and crash-zooming the painting, until its last frame matched the first frame of the second shot. Edited together seamlessly, the final effect is almost unbelievably well done, and an absolute high point of the era of non-computer-generated special effects!

More about The Empire Strikes Back