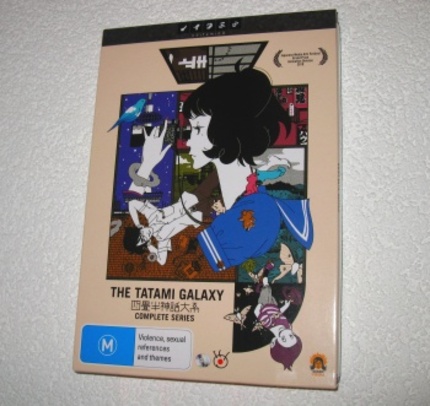 (If only I could watch this series again, knowing what I do know now... Oh wait, I can!)

There are timetravel stories which allow people to visit faraway pasts, dinosaurs, pyramids, or faraway futures with wastelands, aliens, utopias, dystopias...
There are other timetravel stories which allow people to re-do or re-view parts of their OWN pasts and try to avoid certain mistakes. The noitaminA anime "The Tatami Galaxy" from director Masaaki Yuasa is such a story, or rather such a series of stories. Its eleven episodes depict a student doing the same two years of his life in different ways, seemingly all to the same disastrous effect.

Australian distributor Siren Visual has released several of the recent noitaminA series on DVD, and "The Tatami Galaxy" was amongst those. So here is my review. Did I like it? Read on!

A student starts college at Kyoto University, hoping it's the beginning of a life full of adventure, social successes and romancing raven-haired maidens. To accomplish that he joins a student club, but after two years his life is a shambles and he blames his choice of club. If only he could go two years back in time and choose a different club...

But then, clocks literally rewind two years and we see him back at the start, choosing another club. Will the result be different? No. Despite being given all the chances in the world, he keeps missing his true love even though she's actively looking for him. If only he could go two years back in time and choose a different club! Again, we see this happen, different but still ending in failure. Run, rinse, repeat, a series of views into parallel possibilities.

Until we get to see a possibility where the student decides not to join ANY club and just stays in his 4.5 tatami-room during all of his free time. A decision which suddenly traps him in The Tatami Galaxy, a whole universe just filled with endless variations of his room and nothing else...

By now it gets hard to know in advance what to expect from a noitaminA series: so far the list includes action-packed thrillers like "Eden of the East", beautiful slow character studies like "House of Five Leaves" and totally batshit crazy output like... well, like "The Tatami Galaxy".

The best clue on how to take "The Tatami Galaxy" is in director Masaaki Yuasa's earlier work "Mind Game". That film celebrated life (and LIVING it) like no other anime, and "The Tatami Galaxy" basically makes the same points. Any chance not taken is a lost chance. Romantic love is valuable and worth pursuing, and if that causes some bruises, well... that's another glorious part of Life as well, a funny anecdote to be fondly remembered. So open up to it. Quoting Adam Ant: "Ridicule is nothing to be scared of". At least you DID something. At least you LIVED.

Another thing Masaaki Yuasa brings to this series is his sense of color and his eclectic, frantic use of different styles. We're used to characters in anime being drawn in sudden extreme fashions whenever hit by a strong emotion, but for Yuasa this is nothing but a starting point. His work is at its finest when he has to convey an altered reality. In one of the episodes the student gets pulled into a drinking contest and gets very, very drunk. How Masaaki Yuasa visualizes this is nothing short of brilliant and despite the weird choices of forms and colors, what you see is in fact very recognizable and a brilliant representation of getting very, very drunk!
Other examples include how Yuasa shows the (literal) results of an icy retort, being completely flabbergasted or just feeling horny. These are students after all, so the subject matter can become quite adult at any given time although it never gets as explicitly raunchy as "Kemonozume" did (or even "Mind Game" which contains what quite possibly may be the best animated sex scene ever). I'd be very surprised if anyone would find something to censor here.

The series does look very "wild" though. When I reviewed the boxset of "House of Five Leaves" I was able to watch three, four episodes in a row every evening. With "The Tatami Galaxy" I'd get too tired after only two episodes, and often had to rewind and rewatch bits the next day. Each episode is just so full of sound and vision, the protagonists often prattling their speeches at machine-gun speed (sometimes three rows of subtitles are needed to keep up) while your eyes get bombarded with stroboscopic trippy imagery.

On top of that, after a few episodes you start getting hungry to see some sort of point to it all. The student's failures often seem too arbitrary to care about, and he himself is a thoroughly unsympathetic, pretentious prat. Why would we care and put in all that work of watching these fake interchangeable stories?

To that question I would answer: this is just a stage, and one you're meant to have. Sit this through. At the very least every episode will still contain enough hilarity and clever ideas to tide you over to the next, and a point WILL be made eventually.
Seriously, in the second half the series changes pace. It's not so much getting faster or slower, but the focus is changed. Several episodes look at a tiny decision made years after the big one at the start, and after that you get the real Tatami Galaxy which ties everything neatly together. And I do mean that: several oddities, visions, illusions and continuity errors suddenly get solved in one fell swoop. Like a puzzle clicking shut, the last few episodes create the full picture and set you up for the finale. That this finale turns out to be rather mundane and clear-cut does not detract from the fun of having made the journey.

Probably as funny and as entertaining as an abstract piece of modern art can be, "The Tatami Galaxy" is another strong title on Masaaki Yuasa's resumée.
It is also a reminder that most other animated works do not even scratch the surface of their own possibilities.


On to the discs:

Siren Visual has released "The Tatami Galaxy" as a double-DVD boxset. It's coded region-4 (boo-hoo) which means it's only playable in the area of Australia and New Zeeland unless you have a regionfree DVD-player.

The video is very strong. When myopically scrutinizing stills I may come to the conclusion that the transfer is in places somewhat softer than "House of Five Leaves" was, but when you watch the image in movement this is just about as good as DVD can get.

But next is sound and here the boxset truly shines. Instead of a stereo track we now have a Japanese 5.1 and a good one it is too. There is almost always something happening in the background, and especially the sequences taking place in the Tatami Galaxy itself benefit from the surround.

As with Siren Visual's other noitaminA releases there is no English dub, but this series is rated "Mature" so an English dub is as superfluous (in my opinion) as with any live-action film. Feel free to disagree, but I am glad to be able to buy this anime title legally, affordable, on a collectible medium, within a year of it being shown in Japan. If that means the absence of an English dub, so be it. It's pretty unique what Siren Visual is doing here and I fully support it.

Next up are the extras, and here "The Tatami Galaxy" is probably the strongest represented of the Siren Visual noitaminA boxsets. We have textless opening and closing credits, also for the special credits made for the eleventh episode, and a veritable slew of TV-promos and trailers for "The Tatami Galaxy". Trailers for "House of Five Leaves" and "Welcome to Irabu's Office" are also included.

But the best extras are the three special 7-minute episodes, presented here as one full episode where the student and his friends exchange stories, all featuring a mysterious submarine that can dive below land as well as water. A very nice addition these are, and pretty hilarious if you've already finished the series.

Finally there is a 20-minute documentary called "Behind the scenes" in the menu, although the actual title is "EUROPE-KIKAKU's Kyoto Tour". In it, playwright Makoto Ueda (co-screenwriter with Masaaki Yuasa on "The Tatami Galaxy") revisits Kyoto University and his old friends of EUROPE-KIKAKU, a student theater group he helped form. Together they visit a surprising amount of locations which feature in the series, including the hall where the planes for the Birdman Contests are built. Indeed you can actually see students building the plane for last year's contest! Other locations include the university grounds, the river delta where young couples tend to cuddle, and even the actual 4.5-tatami room used as a template for the series!

All in all a fine boxset. Sure I'd have preferred to have this in HD on BluRay, but on DVD I could hardly ask for more. 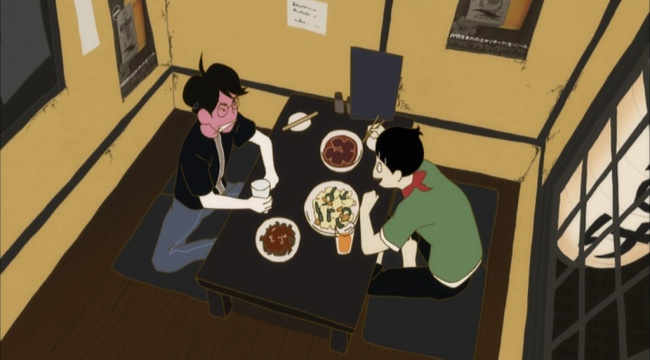 Great write-up, Ard. I came to Eden of the East kind of late in the game, but really, really dug it (in spite of the rather abrupt ending).

Hoping this gets an R1 release at some point.