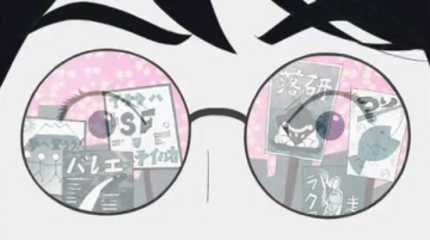 So someone in the West finally pre-licensed one of Masaaki Yuasa's creations, then. Why so exciting? A quick recap; the animation wunderkind shot to fame after production house Studio 4C gave him a shot at the director's chair on the 2004 movie Mindgame. Yuasa brought author Robin Nishi's esoteric cult manga to life with a staggering display of artistry and technical chops married to freewheeling narrative philosophising both playful and emotive, and quite unlike anything else seen in the industry up until that point.

But distributors were on tenterhooks given what they saw as potential lost profits given a growing army of fans had already picked up the Japanese DVD release (apparently mistakenly issued with subtitles). Few people saw Mindgame outside of festival-goers and animation enthusiasts until Madman Entertainment finally gave it an Australian release in late 2008. Undaunted, Yuasa carried on with two successive television series in the meantime, Kemonozume and his masterpiece Kaiba, each of which met with a similarly cool reception outside fan circles (both remain unlicensed at the time of writing).

Madman's acquisitions of both Mindgame and the anthology Genius Party gave the Western fanbase reason to think maybe people were finally paying Studio 4C and the directors affiliated with it some well-deserved attention. Still, Funimation's acquisition of The Tatami Galaxy, Yuasa's newest work for television, is a surprise in some respects. It falls under a package deal the US distributor picked up in acquiring the rights to Fuji TV's noitaminA late-night timeslot, a network initiative dedicated to promoting original programming (which also includes the excellent adaptation of the manga House of Five Leaves).

So a handful of episodes in, is The Tatami Galaxy any good? Yuasa didn't write it - it's based on the novel Yojōhan Shinwa Taikei (Four-and-a-Half Tatami Chronicles) - but with Mindgame he already demonstrated a keen eye for being able to twist suitable material to fit his particular vision while respecting the source.

The story could be described as a deliriously psychedelic play on Groundhog Day aimed at a younger, savvier audience. An anonymous student in Kyoto recalls how, as a freshman at university, he sought to immerse himself in what he hoped would be the perfect higher education experience by joining one of the countless clubs after new blood.

Each episode sees him striving for some noble goal or other as a member, often in pursuit of a romantic relationship with the beautiful Akashi, only to be brought low when events don't go the way he hopes. Someone or something punctures his ego, and tempted to mischief as a result by the mysterious Ozu - the epitome of the aimless slacker, drifting through university looking to do nothing but play pranks and indulge himself - the narrator ends up destroying everything he's managed to achieve, only realising this when it's too late to back away.

If I'd only joined a different club, it'd all have worked out okay, he opines, whereupon time winds back and a new episode begins where he does just that. And things go disastrously awry yet again. Only we quickly realise characters or even entire scenes have persisted from episode to episode, gleefully breaking the fourth wall, and even allowing for Yuasa's trademark madcap surrealism some of the cast are strongly hinted at as being something more than human. Is our hero being tested? Will he finally learn some humility, back away from the temptation to lash out at the world when things go wrong and maybe finally persuade the fiery Akashi he's more than just an idiot?

Initial impressions are more than favourable. Backed yet again by studio Madhouse (who also worked on Kaiba and Kemonozume) this is Yuasa through and through, from the sensory onslaught of the opening graphics coupled with Shintaro Asanuma's breakneck narration in the lead role. The Tatami Galaxy boasts a gorgeous fusion of eighties pop art (both Japanese and Western), particularly in Nobutaka Ito's character designs - along with the deceptively slapdash, sketchy look Yuasa seems to favour, plus more traditional elements reminiscent of woodblock prints or brushwork.

The narration is a dizzying flood of arthouse voiceover not helped by the fact the framing device introduced in the first few minutes means we're apparently being addressed by an omnipotent deity, who's hinting at a bigger picture the lead will still be unaware of several episodes down the line. But it works; one of the subtexts is unquestionably about struggling to make sense of life in general, so being thrown in at the deep end is far from the laziness it might appear.

The Tatami Galaxy offers a fair amount of thematic material to chew on, much of it surprisingly dark; it touches on the idea we may not be that special after all, or that most of us would pick petulant self-destruction over doing the right thing. Ozu (drawn like, and frequently compared to a demon out of Japanese folklore) is almost literally a devil on the hero's shoulder, but he never outright forces him over to the dark side.

The main problem so far is the series begs the question how much is the continuity going to progress? Without having read the source material (not currently available in an English translation) seeing the main character metaphorically banging his head against a wall over and over again raises the niggling suspicion this might get old before too much longer.

Which is not to insist the hero must learn something, or that there has to be some kind of happy ending - not every riff on Groundhog Day needs to copy it note for note. But Yuasa has had problems keeping an idea going over an entire series (witness Kemonozume going spectacularly off the rails), so the worry is there.

Nonetheless what there is so far remains a triumph in any number of ways. Hugely funny, breathtakingly inventive and wildly surreal, The Tatami Galaxy has a real humanist touch that persists even through demented set pieces such as the wandering god of romance peering over the hero's shoulder, the perverted head of the film club and his giant free climbing wall of jutting breasts, or the demonic, subhuman Cycling Cleanup Corps who hunger for unattended bicycles. It builds on much of what Kemonozume arguably neglected; the lunacy is still there front and centre, but there's an undercurrent of pleasing moral ambiguity, a grounding in recognisable personal dilemmas, even a plea for tolerance and maturity.

Hopefully Funimation bringing The Tatami Galaxy to Western audiences so fast means more recognition for all concerned. The industry may not be in the best of health, but it still has its shining lights and Masaaki Yuasa remains one of the brightest. Greatly promising, well worth watching, so far The Tatami Galaxy is another jewel on what has to be one of the strongest resumes in animation, and comes very highly recommended.

Do you feel this content is inappropriate or infringes upon your rights? Click here to report it, or see our DMCA policy.
Shintaro AsanumaKeiji FujiwaraYuki KaidaMaaya SakamotoAnimationComedyDrama