noitaminA is a suite of experimental, outside the box anime productions (produced by Fuji TV) premiering late night in Japan that have thankfully been licensed by the fine folks at Siren Visual.

These stellar series comprise almost all of the elements that genre fare anime lack, and purposely avoids the fan boy tropes of magical girls, mecha and other tried and true themes. The end result is an intellectually challenging animated art, intended to provoke thought but also entertain in equal measure.

Ever regret a decision so deeply that you wish you could just start all over again? Well The Tatami Galaxy addresses this concern in the most mind-altering way imaginable in a setting that would normally be rather mundane; choosing which club to devote the rest of your University life to; but is brought to vivid life regardless with twisted characters abound, odd motivations to be unearthed and warped philosophies.

The story (ies) begins with an unnamed university student (referred to as watashi or 'I') assaulting the screen with a rapid succession of narration about his unfortunate life and the decision he made at the start of his school year. The pace is 'blink-and-miss-it' and becomes abridged as each episode progresses. This summation is due to the retained structure throughout each episode and it works, no plot is missed and nothing is lost.

The story of The Tatami Galaxy takes you on a journey so far flung from University life that it includes the protagonist being involved in an intricate revenge, joining a secret Chinese restaurant society, a honey bee cult, a movie club where he fails as a director but makes an offensive documentary and many other bizarre tangents that are all equally hilarious and tragic. There are so many so-called realities, each as bizarre as the next and each one addresses the philosophy of choice and consequence.

Ultimately The Tatami Galaxy is very cerebral in its narrative and intelligent enough to explain what would normally be plot holes or inconsistencies.

But what of the characters that inhabit this galaxy? None are more demanding of explanation than the fiendish and gross Ozu, who is a freak, even for anime standards. Regardless of the situation 'I' finds himself, Ozu forces his way in, usually playing the dual role of ally and saboteur, who, like the Joker of Batman fame just seems to create chaos for chaos-sake. "I put all of my efforts into making you no good" he beams at the protagonist as they (almost always per episode) enjoy hotpot together and banter. The protagonist is no better, constantly cursing Ozu, but always befriending him.

The majority of the dialogue in The Tatami Galaxy is poetic trash, it is not meaningful but sounds wonderful, and it is both poignant and pointless all at once. The protagonist is as he would describe, an idiot beyond all reproach.  He is mostly a blank slate, eager to do well and filled with so much passion, just not one iota of luck, skill, or common sense. Ozu exploits him as much as possible and through each episode it becomes clear that Ozu's evil knows no bounds.

There are some supporting characters that can be found in almost any reality too. The protagonists unknowing love interest Hanuki seems to be around and he always encounters her and her missing keychain which she holds so dearly to her heart. To compliment this, the protagonist encounters an old lady fortune teller that tells him destiny is dangling in front of him, clearly beyond a shadow of a doubt referencing the aforementioned keychain that he finds and later takes home to dangle on his ceiling fan. How 'I' does not pick up on this reference and to in fact return the keychain to Hanuki is not clear, but certainly supports his idiot beyond words theory.

Two other characters of considerable note are the master, who sprouts random advice and Jogasaki, a fellow University classmate, admired, respected but who has too many complexes to count. Both these characters appear in random intervals throughout the series, and link with the main narrative in interesting and hilarious ways.

Of course, one cannot talk about The Tatami Galaxy without mentioning its art, this is noitaminA after all and the stylish conventions are always experimental and thus unique in nature. The mind bending opening song confirms that combined with the original plot, bizarre characters and transforming visuals, that The Tatami Galaxy will be an incredibly wild ride. The color on the screen in most scenes is of one palette and almost always matches the personality or mood of what is happening onscreen. Coming from the brain of the anime film Mind Games creator, the artwork is inventive and is a mix of old style manga and new rougher and original characters and is a lot to take in, like an iPod commercial on crack; the one with the silhouettes and bright colors.

When the protagonist faces the possibility of (some mild spoilers follow) sex for the first time, he undergoes one of the funniest moments in anime history, when the focus shifts to his internal brain activities, and something that is representative of his reproductive organs. Regardless of these fun moments, and there is a hundred more, easily my favorite part of the series is the trilogy of maidens, a real life dating simulator where the protagonist is essentially given three picks of three women and one attempt with each of them, in particular one episode which focuses on the detailed principles of sex doll management!

The mythological and traditional converge with the modern and complicated in The Tatami Galaxy, and there is a forbearing philosophy that carries the series along. Along with what is essentially time travel at the shows core (going back to do it again per episode) the series plays with alternate reality, possibilities and even the string theory, time must not be linear as other characters discuss what has already been, but technically has not happened. The laws of reality are broken many times in this manner but it never comes across as silly or redundant, it is necessary and suggested. There are some constants between each reality, the old fortune teller lady (whose forced prophesizing service increases in yen every time) the fact the protagonist is studying engineering regardless of the club he chooses and some of the other important characters.

Essentially The Tatami Galaxy is a case study of 'I', the protagonist. His soul has been charred by idleness and wasted passion, he is not the master of his own destiny and every scenario he finds himself in he lets it lead him to his fate.

When 'I' does some intense soul searching as the series concludes he uncovers the philosophy of The Tatami Galaxy, a 4x5 room that can only hold so many possibilities and changes, it is in fact endless, but the point of this observation is to reveal to 'I' the one-best possibility. These self-aware parallel worlds converge around 'I' and the final two episodes of the series are a culmination of how great and Avant-garde The Tatami Galaxy really is. Everything comes full circle, everything is explained and the series concludes with a bizarre but necessary twist.

The extras were quite surprising, they are really worthwhile and one of the highlights of the noitiminA collection so far. They include brief 1-2 minute bites or mini-stories and a few special episodes that are half length and deal with really bizarre scenarios such as saving Kyoto from sinking, mockumentary style. These are mostly nonsense but still a lot of fun.

Getting to the real highlight of the extras however, is the behind the scenes of The Tatami Galaxy, told in quirky detail by the director and interviewer as they traverse the University the original novel, and many of the scenes in the anime, were based off. Watching the scenes from the series come to life on screen is fascinating, and the nostalgic and silly university stories the director relays really bring to attention his passion for the series and his undeniable talents. It ends with most of his previous university comedy troupe in a tatami room waving goodbye to the screen.

The Tatami Galaxy, as part of noitaminA is really something special, a groundbreaking anime series that challenges the conceived notions of reality in an entertaining and infinitely original way. It is no doubt a faithful adaptation of the thought provoking novel, and it is doubtful that any other format could do a story such as The Tatami Galaxy any justice. 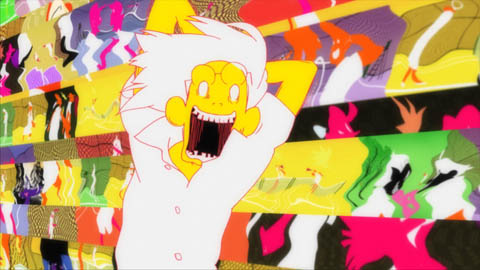 Thanks Ard, hope you've seen it!

I've just started on disk two. I will post my review when I'm done but will leave some breathing space between mine and this one.