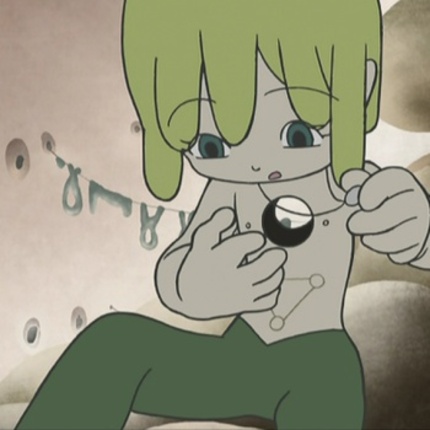 (That guy on the left? That's what you will feel like once you realize you've seen all the episodes: as if someone punched a hole in your chest.)

At long last someone released Masaaki Yuasa's "Kaiba" as an English-friendly DVD boxset. Or maybe I should say "dared to release" because this is one of the most emotionally devastating anime series I've ever seen, despite the artwork initially suggesting that "Kaiba" is something you'd stop watching after having turned four years old.
This mix of seemingly childish art and very mature content is probably a marketing nightmare, and one of the reasons why we had to wait for so long.

Well, rejoice. Thanks to Siren Visual in Australia we all finally can see what Matthew "Eight Rooks" Lee was ranting about in his review more than two years ago. And he was right because "Kaiba" is an unbelievably hard-hitting work of art. In fact I have not been so moved by an anime since watching "Grave of the Fireflies".

Strong words, I know. And I will explain (at length), but rest assured that for me the DVD-release of "Kaiba" marks a high point in this year so far. Read on...

Technology has been invented which allows the storage and transfer of memories. As a result people are now theoretically immortal because you can just dump all your memory in a younger, newer body and live on. But you can also expunge bad memories and add nice ones from someone else if you want.
However, these services cost loads of money and as a result a rift has appeared between the haves and have-nots. People are forced by poverty to sell their bodies and memories to be used as playthings by the rich, or even have these things stolen from them by robbers. Illegal trade in memories and bodies is rife.

In this world Warp awakens, somewhere in a slum. He has lost his memories but his body is of a rare type, imbued with tremendous powers even though there is a large hole in it. He also has a locket with a picture of someone he apparently once loved, so he goes in search of this person but soon gets involved in a fight between the Government and rebels. To survive, Warp keeps switching bodies as necessity sees fit. But with your very identity being as malleable and exchangeable as it is, who is Warp really and who is he searching for?

The first thing you notice when watching "Kaiba" is the unique art style used by Masaaki Yuasa. This series looks like a cross between Rene Laloux' "Fantastic Planet", 1920's Disney animation and the earlier works of Osamu Tezuka.
This 'cutesy' style is a striking and bold choice, and seems to be missing the mark entirely for presenting a hardcore science-fiction story in.
But actually the series' unique visual artistry turns out to be a stroke of genius. By making everything look equally weird and childish you don't get distracted by things like mechanical designs. All of it looks somewhat ridiculous, from clothing to weapons to planets. And instead of being wowed by smart-looking machinery the visuals ensure you're being lulled into a false sense of security, as if you're being told a bedtime story from your favorite book.

For make no mistake: a FALSE sense of security it is. While the first episode only hints at a dark background, it does so with some sly black sense of humor and slapstick. In contrast, the second episode has people dying and shows perverse sex (and sometimes people dying through perverse sex), erasing any doubts about this possibly being a children's story. It is a mere warning though for what comes next, as episode three carries the first real emotional gut-punch. Rest assured it's not the last.
"Kaiba" consists of twelve episodes of 23 minutes each so expect to receive another few pummelings along the way...

As delightful as the memory-storage technology may seem to be with its promise of immortality and knowledge-sharing, Masaaki Yuasa is quick to point out all of the disadvantages. If you remove memories you're not fond of, do you not also remove the gained experience which prevents you from making the same mistakes in the future? Masaaki also poses that part of your very soul and identity are in your memories. By messing with your memories you mess with the very nature of who you are as a person.
"Kaiba" is not simply a story about memory-loss, or being brainwashed. The memory-storage technology is a necessary and unmissable part of it, the linchpin upon which everything hinges. This makes "Kaiba" a true work of science fiction, in the old sense of the term when it was first coined in the late nineteenth century. True science fiction does not focus on visiting strange planets, battling weird monsters and maybe save a galactic princess or two. All those things fit better with romantic fantasy. Science fiction used to focus on a technological breakthrough (or discovery) and its effects on society, which is exactly what we see here. What would life be like when the storage and transfer of memories are made possible? Masaaki Yuasa says it would be a sad, sad thing, and his arguments are compelling.
Also, science fiction often holds the best trump-cards for horror. The longer you think about some of the things you witness in this series, the sadder and more horrible the concept becomes. William Gibson made some of the same points in his books, and Mamoru Oshii did this as well in his "Ghost in the Shell" and "Innocence". But "Kaiba" does it far more poetically and with greater emotional impact. Its script is as intelligent as its visuals turn out to be, and the series as a whole is a stellar piece of art.

What truly amazes me is how well Masaaki Yuasa managed to move me. You know almost nothing of the characters as you meet them, and with all the identity changes it would be fair to say that you never really get to know them either. Yet you get involved not only in their plight, but also in the general misery and unfairness of the world as depicted here. Seeing a family where all members have sold their bodies away and whose memories are now housed in a large Ferris-wheel is comical at first, but a few choice remarks by the children bring home just how horrific such a situation would be.

At several times in the story I noticed my vision blurring and was much surprised by how emotional I was getting, especially when watching a series which looks so quirky and old-style cartoonish.

Speaking of emotional: helping you get pushed in the right direction is one of the most marvelously haunting scores I've ever heard. The music is courtesy of Kiyoshi Yoshida (of "The Girl Who Leapt Through Time" fame) with some songs by Seiri Kagami. These seemed like lullabys at first but as the series progressed, so did my appreciation.

Beautiful, sad and poignant, "Kaiba" is one of the best series I've ever seen, animated or not. Period. There is simply nothing else quite like it, not even within Masaaki Yuasa's own filmography.

I give this title the highest possible recommendation. I love it and it's up there with the classics.
Now go watch it. I know I will, repeatedly... 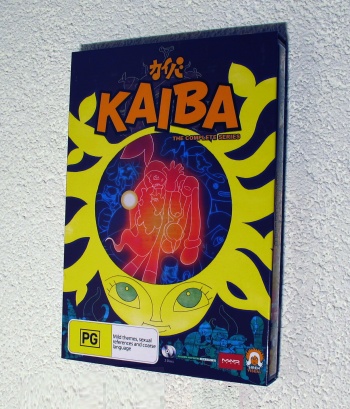 If Siren Visual keeps kicking ass like they've been doing lately I'll need extra cushioning whenever I check their website. I mean, I knew they could rock on occasion when they released "Genius Party" and "Genius Party Beyond", but check out some of their line-up so far in 2011: "House of Five Leaves", "The Tatami Galaxy", "Welcome to Irabu's Office", "Durarara!!", "Welcome to the NHK", "Dennou Coil", "Bunny Drop"... and "Kaiba". It bears noticing that many of those titles I just mentioned are pretty awesome and most are also pretty exclusive to Siren Visual at the moment.

Like some of the releases above, "Kaiba" only has a Japanese soundtrack with good English subtitles. It's also pretty barebones with just a few trailers for other Siren Visual titles on it. The discs are locked to region 4 (Australia, New Zealand).

But at least I can finally see this series instead of having to wait for some indeterminate future edition, and both video and sound are great, even if the track is only a 2.0 stereo one. "Kaiba" is very reliant on color, and the contrast between a generally muted drab palette and occasional bright highlights is gorgeous. The video quality on these discs is terrific and fully does justice to Masaaki Yuasa's artwork.

So I fully endorse this edition and recommend everyone with a region 4 or regionfree DVD player to go buy it.

Kaiba can be ordered worldwide through Siren Visual's website. 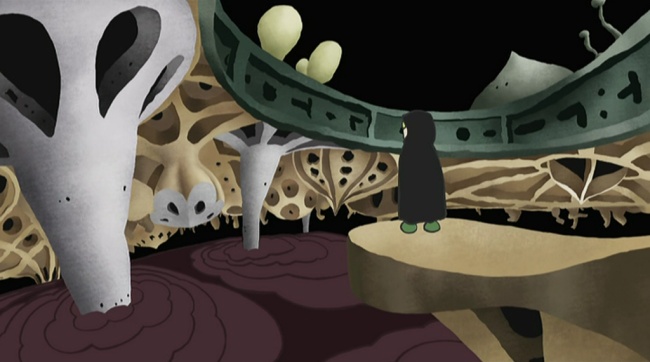 Do you feel this content is inappropriate or infringes upon your rights? Click here to report it, or see our DMCA policy.
animeMasaaki YuasaSiren VisualHouko KuwashimaAnimationAdventureDrama