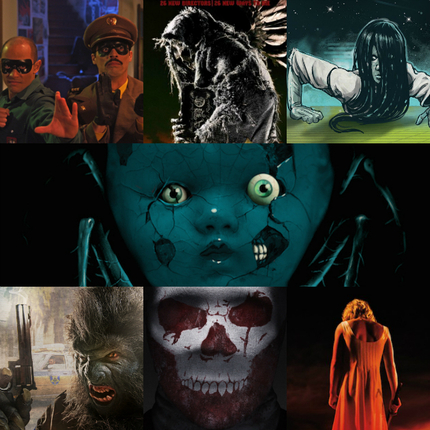 If the official selection announcement brought few renowned titles, now the second wave is precisely full of those. ABCs of Death 2 and V/H/S: Viral, the two most anticipated horror anthologies of the year, are premiering in Mexico at Feratum.

ABCs of Death 2 is composed of 26 short films by such directors as Aharon Keshales and Navot Pupushado, Jen and Sylvia Soska, and Bill Plympton. After its premiere at Fantastic Fest, this sequel has been widely regarded as a much superior film to the 2012 original. On the other hand, the third V/H/S movie combine efforts by Gregg Bishop, Nacho Vigalondo, Aaron Moorhead and Justin Benson, and Marcel Sarmiento.

Aside of the anthologies, Feratum has another two special screenings this year. German oddity Der Samurai is the opening film, while the doc Why Horror? is having its world premiere at the festival.

But that's not all, as there are a couple of parallel sections too. The first one is an exhibition of fantastic cinema from all over the world, and includes Brazil's Bacanal do Diabo, Philippines' Kung Fu Divas, Nigeria's Ojuju, and Portugal's Captain Falcon (aka Capitao Falcao). I'm especially excited for the latter, a movie about a fascist superhero, in the vein of the Batman and The Green Hornet TV shows from the sixties (it was showcased by our own Todd Brown).

The other section focuses on the work by the Raven Banner Entertainment film company. Feratum is presenting Ejecta, Copiii: The 1st Entry (aka The Devil Incarnate), and WolfCop. Sounds like a pretty damn good lineup, indeed.