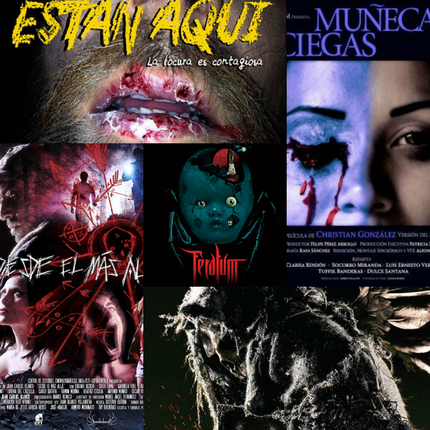 I remained focused on the Mexican selection during the last couple of days of Feratum 2014, to the point that I ended watching each and every national, feature-length film that the festival presented. Unfortunately, the trend of the first two days continued and the quality of the work was, to put it mildly, disappointing.

The third day of the festival started with Están Aquí, the Mexican effort that eventually won the best screenplay award. That was such a bizarre, inexplicable decision because if the movie lacks something is precisely a damn competent script. Están Aquí is typical no-budget cinema, a film made entirely in one location in which everything relies on the cast and, indeed, a creative script.

It tries to tell the story of an alien invasion, but everything is only a suggestion as there was clearly no money to go further with the alien stuff. That's fine, and so many films have proven they don't need much resources to be effective, including the single best Mexican science fiction film of the year: Isaac Ezban's The Incident, where the first half was filmed in one location, with three actors only, but with clever ideas and an intriguing story.

In Están Aquí a family is stuck in a warehouse because an apparent alien invasion is happening outside. The father is entirely convinced that the invasion is real, but some other members of the family don't really believe him. There will be conflict among them, as it's a classic setting, but Están Aquí is poorly made in every way. Acting, dialog, and the situations are all ludicrous, and thanks to that some scenes were at least fun to watch.

The penultimate Mexican flick I watched at Feratum was Desde el Más Allá. Even if it was a work in progress version, this was by far the most professional effort of the Alucarda section. After this Mexican double feature, we had the opportunity to enjoy the much anticipated horror anthology ABCs of Death 2. Some segments were disappointing, like Bill Plympton's H is for Head Games and Aharon Keshales and Navot Papushado's F is for Falling (I expected much more from the Big Bad Wolves creators), but most of them were brutally magnificent.

ABCs of Death 2 is a must thanks to such efforts as Larry Fessenden's brilliantly edited N is for Nexus, Marvin Kren's surprising R is for Roulette, Juan Martínez Moreno's split screen masterpiece S is for Split, Jerome Sable's brutal V is for Vacation, and Soichi Umezawa's visually impressive Y is for Youth. You can read ScreenAnarchy's full ABCs of Death 2 review here.

During day 4 and last of Feratum (Sunday, October 5) I had the chance to watch only one film, before returning to Mexico City. Christian Gonzalez's Muñecas Ciegas played at the main theater and, again, the quality displayed was far from being decent. Gonzalez is actually Mexico's so-called videohome king, and his credits include the underground video classic Ritmo, Traición y Muerte: La Cumbia Asesina.

But a classic Muñecas Ciegas is not. The flick is barely watchable, with a solid first part but a second half that makes no sense. It begins with a man who manages to take young girls home, only to literally take their eyes out. This horror story is presented in both sepia and black and white, but later color is introduced as new characters appear, including a couple of lovers and a psychologist. It's a mess of a movie and trying to understand how everything relates is kind of impossible.

Back in Mexico City I had the chance to talk with Gonzalez himself. A real gentleman, who accepted Muñecas Ciegas is not his best work. "Watch Ritmo, Traición y Muerte: La Cumbia Asesina, that's my real gem," Gonzalez said to me before I went home after four days of Feratum.

Do you feel this content is inappropriate or infringes upon your rights? Click here to report it, or see our DMCA policy.
ABCs of Death 2Feratum 2014Mexican CinemaTlalpujahua