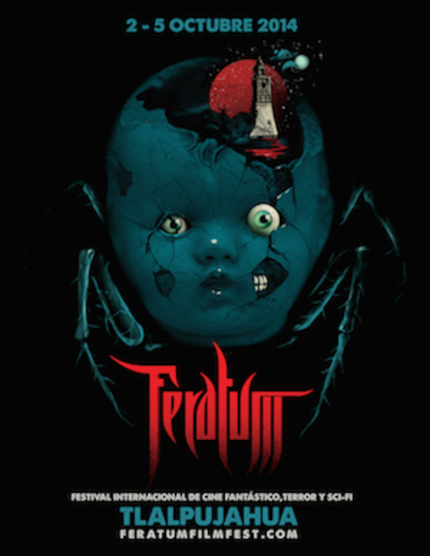 For the second year in a row, I'm in Tlalpujahua, Michoacán covering the Feratum Film Fest for ScreenAnarchy. Thursday, October 2 was the first day of the third edition of this Mexican genre festival and it kicked off for me with the screening of a couple of short films and a feature length competition title.

Just like last year, the arrival to the town's main venue was a little confusing. While the program indicated that the 4 PM slot was already the third screening, the theater was still closed. For one second I thought, this is Feratum 2013 all over again, with last minute changes and a notorious disorganization.

Actually, by the time the press arrived to Tlalpujahua, Feratum had already made at least two important changes: WolfCop and Captain Falcon (Capitao Falcao) disappeared from the program, just one week after the films were confirmed at the press conference. It was a drag, indeed, but ultimately, the festival had a pretty solid beginning, despite the first impression.

While the 4 PM screening of Meet Me There had some minor technical problems, as the image went black for some moments, it went all right. It is also worth noting that the theater was renovated and now offers much more comfortable seats and better sound and image. Meet Me There itself was plain boring, but the organization of the festival has improved notably.

The first day was not a long one for me. Aside from Meet Me There, I only watched opening film Der Samurai, which I had already seen back in May at Fantaspoa. The "black carpet" prior to the screening was definitely marred by the constant rain, but once we were inside the theater, everything went as planned. Der Samurai is a terrific film and its director Till Kleinert one of the most notable new talents of the year. It was very well received among the Mexican press and some members of the official selection jury too. You can read here ScreenAnarchy's Der Samurai review and here our interview with Kleinert.

Day 2, on the other hand, was a real movie marathon, with three films from the official Mexican selection, plus the special screenings of Why Horror? and V/H/S: Viral. I really dug the Canadian and the American title, however - and sadly - the ones from my own country were mediocre at best. The first two Mexican films, Ulises and Zona Invadida, are different types of bad. Ulises is tedious bad (repetitive and with the worst style for flashbacks I have ever seen), while Zona Invadida was a whole lot of fun. Still very, very bad, but the senseless story of an alien invasion in the Mexican Sierra had its moments of pure hilarity, like seeing old star Mario Almada trying to stop the extraterrestrial.

Paciente 27 was the last Mexican movie of the day. It really bored me, but everyone here seems to agree that this is a step forward for the director Alejandro Alegre, as his previous effort was Los Infectados (which I haven't seen but is widely regarded in Mexico as a total disaster). In short, it's good news that Feratum is giving Mexican talent an exclusively section, but that doesn't mean the films are actually worthy... at least as of today.

The fourth picture of the day was the Canadian doc Why Horror?. It was its world premiere and one of its directors, as well as the star Tal Zimmerman, attended the festival. Zimmerman is a huge horror fan; he collects movies, memorabilia, acts, and has published articles in magazines purely out of passion for the genre. The film follows him to answer the question of why people love horror, as Zimmerman himself hasn't a clear response.

Why Horror? is genuinely interesting, as it tries to understand the human connection with horror, and how people have expressed their fears through art over history (see Álex de la Iglesia talking Goya).

Why Horror? features - literally - a resume of the history of horror films (from the times of German expressionism to the present) , and since its protagonist grew up watching VHS tapes and was socially isolated, it also depicts how times have changed in general. What once was obscure has now been swallowed by the mainstream. One of the interviewees says, for example, that now even his mother is a fan of the zombies, thanks to The Walking Dead! Why Horror? goes to Mexico, Japan, and features interviews with the likes of George A. Romero, John Carpenter, Don Coscarelli, and Eli Roth. It's definitely worth checking out.

Final film of the night was the third V/H/S entry. It was a really nice time and I found the three main segments to be really solid stuff (Nacho Vigalondo's one was my personal favorite). You can read ScreenAnarchy's V/H/S: Viral review here, and expect more Feratum dispatches!