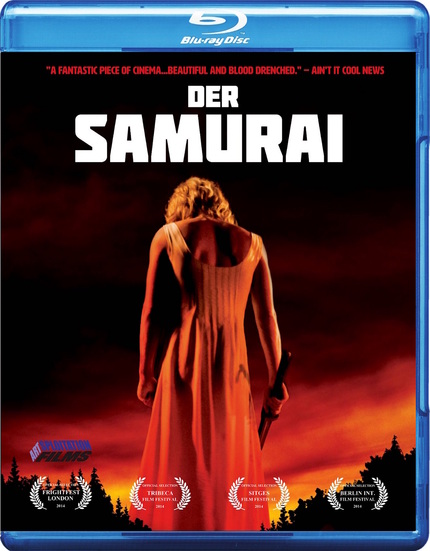 Artsploitation Films is one of the most adventurous film distributors in the world, and one with whom we at ScreenAnarchy share very similar tastes. After a 15 month Hiatus following the release of Jason Banker's Toad Road, Artsploitation is roaring back into the off-beat spotlight with a June full of crazy and fascinating releases.

The first of these releases is 2014 festival favorite, Der Samurai. The film, directed by Till Kleinert, is an oddity both in concept and in function. As Artsploitation describes it:

Unlike any other horror film you'll see this year, DER SAMURAI is a German mind-bender about shape-shifting cross-dressers, bloody decapitations, repressed sexual desires and small town life. But while director Till Kleinert's film is a surreal mix of dark comedy and eerie creep-out that recalls David Lynch. Jakob is a policeman in a village deep in the woods, where little happens until the arrival of a mysterious wolf that is causing havoc. Working the night shift, Jakob is tracking the wolf...only to discover that the lupine lurker is actually a man clad only in lipstick and a ladies' slip, and toting a samurai sword that he uses to lop off the heads of the townspeople, including Jakob's tormentors. Jakob and the transvestite samurai seem to share a bond, and as the night gets darker, events get even weirder. Completely bizarre yet wildly entertaining, DER SAMURAI is a horror must-see for the adventurous!

Sounds like a winner to us! I haven't seen the film yet, but I"m very excited to check it out. If you're interested in what is in store for you, Artsploitation has given ScreenAnarchy an exclusive, and very weird, clip to share with our readers. I'm not entirely sure what's going on here, but I really can't wait to find out.

Der Samurai comes to US Blu-ray and DVD on Tuesday, June 9th.

Do you feel this content is inappropriate or infringes upon your rights? Click here to report it, or see our DMCA policy.
Till KleinertMichel DiercksPit BukowskiUwe PreussUlrike Hanke-HaenschFantasyHorrorThriller