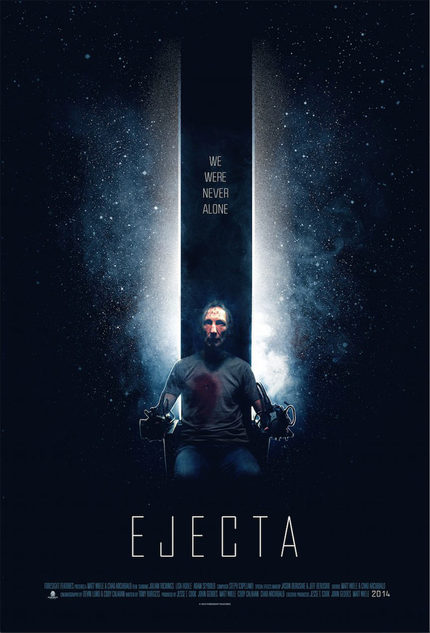 Indie scifi-horror Ejecta hits limited theatrical release and VOD platforms from IFC Midnight on February 27th and we've got an exclusive clip to share from the film.

Reclusive blogger Bill Cassidy (Julian Richings, Cube) claims to be the subject of a horrific alien haunting that has plagued him for a majority of his life. Documentary filmmaker Joe Sullivan (Adam Seybold, Exit Humanity) receives a mysterious email from Cassidy's online alias one night with instructions to meet him the following day to discuss the unexplainable possession. As Cassidy tells his story on the eve of a historic solar storm an unidentified flying object crash lands on the property and Joe Sullivan films the entire thing. As the two men fight for their lives while the terrifying life form hunts them an anonymous intelligence group descends on the farm to ensure they are the only ones who can control the information regarding what Bill has witnessed. Lead by the insane and soulless Dr. Tobin (Lisa Houle, PontyPool) this group will stop at nothing to prove to the world that we were never alone in the universe.

From a script by cult author Tony Burgess (Pontypool) and starring iconic Canadian character actor Julian Richings - one of the truly great faces in the industry - take a look at the clip below!