Now On Home Video: Artsploitation Films Returns With HORSEHEAD, DER SAMURAI, And THE HOUSE WITH 100 EYES

J Hurtado
Editor, U.S. ; Dallas, Texas (@HatefulJosh)
Tweet Post Submit
American independent film distributor Artsploitation Films awakens from a 15 month hibernation with three very interesting releases that prove their mettle in terms of championing films that would easily fall by the wayside otherwise.
All three are horror films of a sort, the two European offerings are a bit more cerebral than the homegrown film, but all three have something interesting to recommend them. However, Artsploitation have made a couple of big changes in the way they release films to home video, including the introduction of Blu-ray to some titles. Does it work? Well, it's complicated, but read on and see.


Joshua Chaplinsky and Peter Martin contributed to this story. 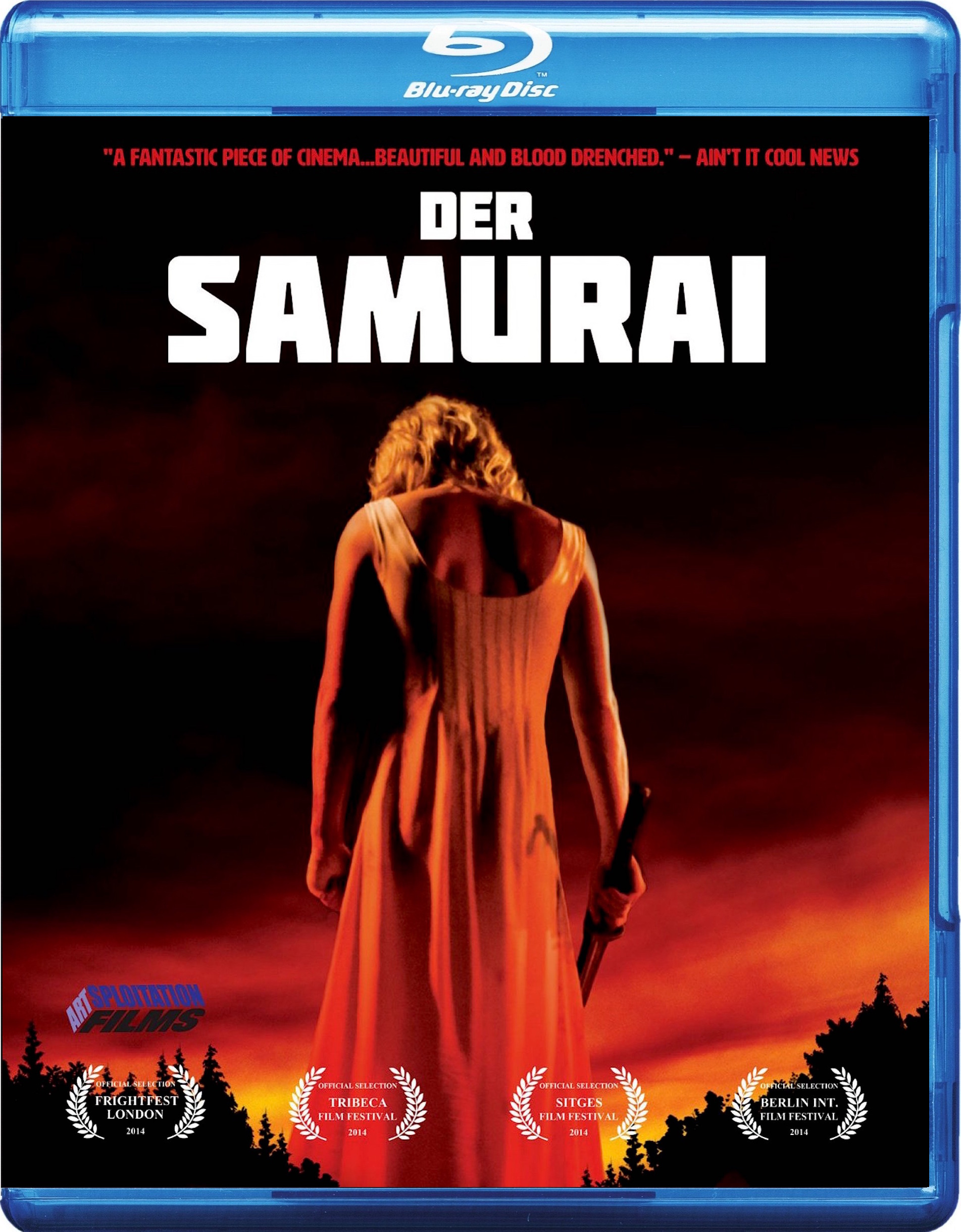 Till Kleinert's Der Samurai reads as one of the most compelling synopses in recent history:

Jakob is a policeman in a village deep in the woods, where little happens until the arrival of a mysterious wolf that is causing havoc. Working the night shift, Jakob is tracking the wolf…only to discover that the lupine lurker is actually a man clad only in lipstick and a ladies’ slip, and toting a samurai sword that he uses to lop off the heads of the townspeople, including Jakob’s tormentors. Jakob and the transvestite samurai seem to share a bond, and as the night gets darker, events get even weirder.

The film itself is a quite odd slow burn of a horror film that forces the viewer to commit to the unexplained weirdness in the hopes that it'll be explained by the end. Frankly, I found it to be a slog in the early going, but once the film ramps up the delirium, I was completely on board. In fact, the final reel of Der Samurai ranks with the finest conclusions to any horror film in recent memory, even though tonally it feels somewhat divorced from the rest of the film.

Our Joshua Chaplinsky reviewed the film out of Tirbeca last year and said of the film's invitation to weirdness:

If you do [go with it], you'll be treated to an inventive film and a bloody good time. Jaws will drop. Heads will roll. There are subtle moments of humor that will make you fall in love. The punching of the plastic swan. The bonfire dance scene. That scene right there, that's when I knew the film had me. I knew I was watching something special. And that final scene, the final shot, the song that plays over the credits. Great stuff.

As far as the disc is concerned, Artsploitation have introduced Blu-ray to their releases with this and Horsehead, and have oddly released those two on BD-R discs, rather than pressed Blu-rays. Now, this does not affect the quality of the presentation at all, both films look and sound amazing, but there still isn't a lot of information about the longevity of BD-R discs yet. Artsploitation has assumed responsibility for this and will put future Blu-ray releases on pressed discs, but it's best that you know what you're getting into ahead of time.

In terms of extras, the film showcases two major features. The first is an engaging and insightful commentary with director Till Kleinert and producer Linus Di Paoli, and the second is a ten minute behind the scenes featurette that is silent and narrated with subtitles. It's a pretty odd little feature that jumps all over the place, largely focusing on the FX work.

One thing that is conspicuous by its absence is a booklet. One of my favorite things about previous Artsploitation Films releases was that they always included a substantial booklet. However, with their revamping the booklet appears to have gone the way of the Dodo. Sad, I hope it comes back. 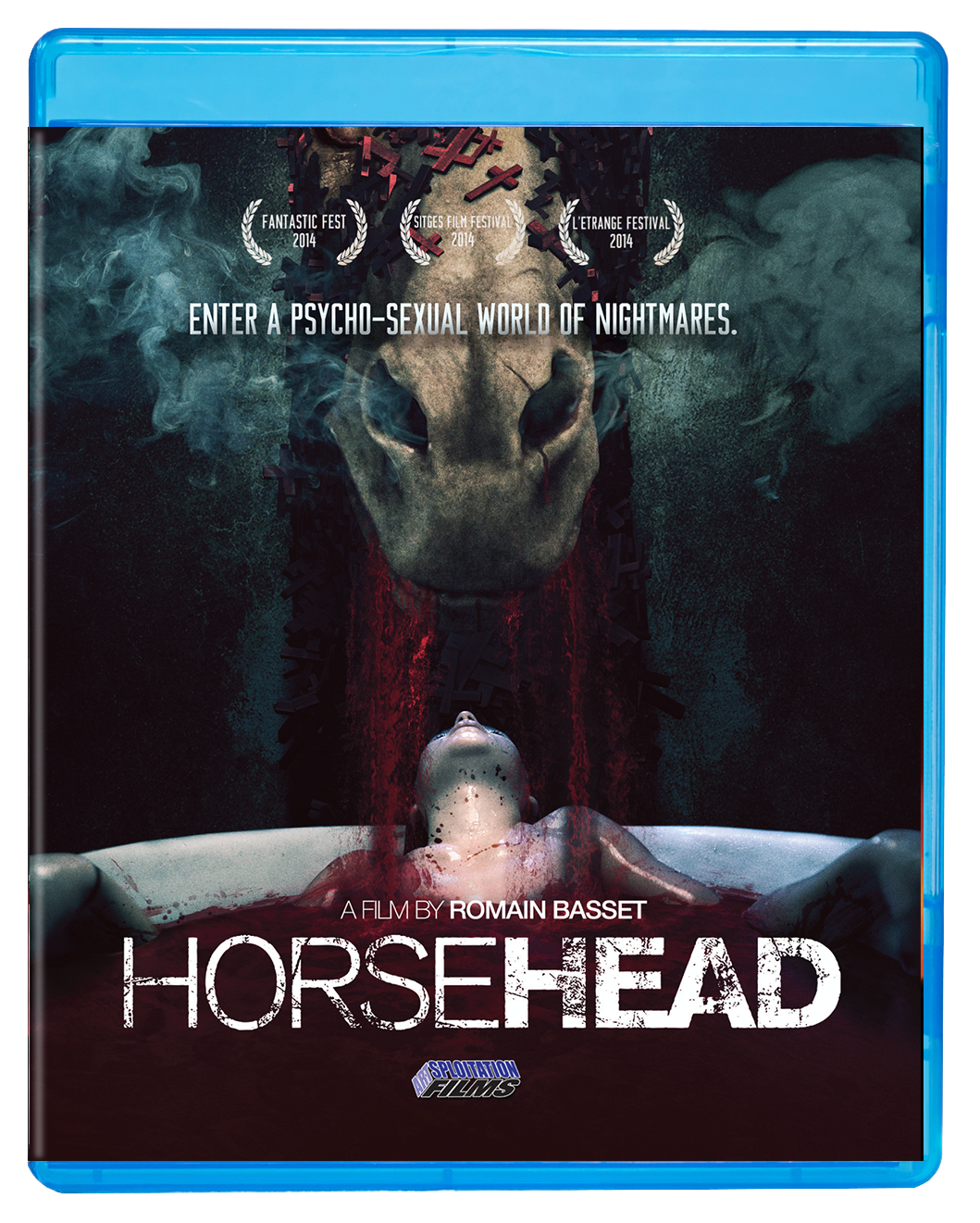 Horsehead is one of the films that I skipped at Fantastic Fest last year because I couldn't get a vibe of the film from the synopsis. Now that I've had the opportunity to visit the film on Blu-ray, I kind of wish I'd made it fit my schedule. While it doesn't exactly reinvent the wheel, it does address dream and nightmare logic in a novel way that makes for unsettling viewing. Peter Martin talked about his feelings back in February:

The film will certainly reward repeat viewings, however, it can be a bit of a slog that first time around when it's not terribly clear what's going on. In this case, once you know the destination, the journey seems more worthwhile. Here is Artsploitation's apt synopsis:

Director Romain Basset’s tale follows beautiful young Jessica (Lilly-Fleur Pointeaux) as she returns to her family’s countryside estate for her grandmother’s funeral. Haunted by recurring nightmares of a horse-headed monster, Jessica attempts to put her studies of “lucid dreaming” to good use, as she semi-consciously navigates through this dream landscape, trying to discover the secrets behind this sinister apparition. But Jessica must also cope with a hostile mother (The Beyond‘s Catriona MacColl), and the growing realization that the death of her grandmother was actually a suicide triggered by the woman’s past traumas and visions. HORSEHEAD is a feverish, ethereal journey through the world of nightmares.

The disc, like Der Samurai, is a BD-R, but beyond that I see no technical issues. The beautiful imagery in Horsehead is rendered accurately and the film looks as gorgeous as it possibly can. The audio is similarly accurate and haunting. No issues to report.

Artsploitation have added a bit more to this disc in terms of extras, with several of director Romain Basset's short films as well as an hour long behind the scenes featurette that definitely opened my eyes and helped to expand my appreciation for what was accomplished here. Definitely a disc worth checking out. 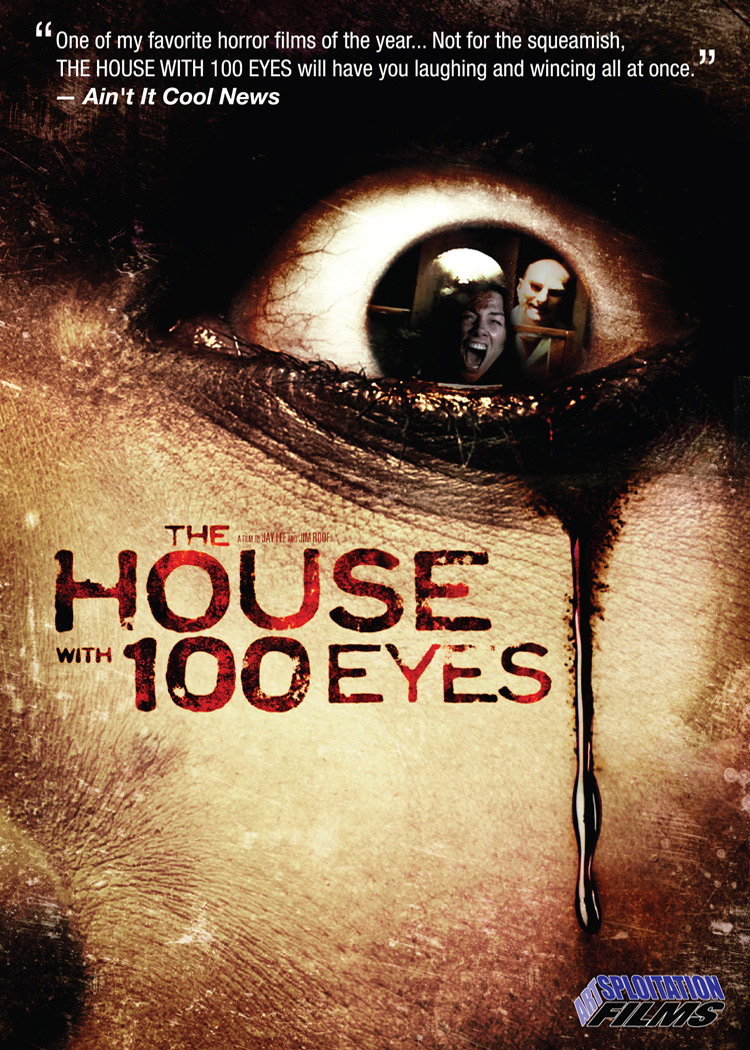 The final member of this initial trio is Jay Lee and Jim Roof's The House with 100 Eyes on DVD. This film tells the story of a happy couple who just happen to be in the snuff film business. The House with 100 Eyes is told entirely through footage from the multiple cameras that Ed and Susan have set up around their house. This particular night Ed has decided to go for broke and shoot a triple feature, seducing and killing three people for a single video. However, things go predictably badly and the film ends up not being the one he envisioned.

The film does a pretty good job of keeping up its conceit, and seeing as co-director Jim Roof also stars as Ed the murderer, he does a great job with keeping the intended tone. The killers feel sleazy, the victims feel wimpy, and the evening feels creepy, however, for me it never quite added up to the sum of its parts. I don't know if it went too far or didn't go quite far enough, but the dark comedic tone left me wanting for more of something to be afraid of. The film never quite went full tilt as a comedy or a horror film, and as a result it just felt a bit disturbing. However, I suppose that could've been the intention, but I still never quite felt that the film was as cohesive as it could've been.

To its credit, The House with 100 Eyes is well-paced at only 76 minutes and seems to understand how important it is to get in and get out, rather than dwelling in the minutiae. That being said, I liked it, but didn't feel the pull that I'd hoped to after the first few minutes.

The DVD for this film is quite good. The image quality varies from shot to shot as it is meant to mimic the various types of cameras used in the house, but overall the digital sourced image is solid and pleasing. The audio is quite clear and good as well, though I feel the the filmmakers overused certain distortion effects to the point of irritation. The disc also provides a commentary track that is informative but sparse, and a couple of short gag reels and a sizzle real. Overall, a decent package for a decent film.