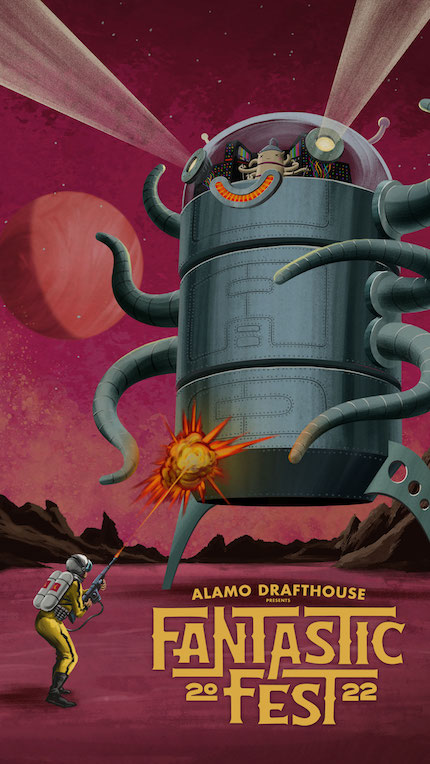 One of our favorite genre-focused film festivals in the world, Fantastic Fest will open this year with the World Premiere of the creepy-looking thriller Smile and conclude with the sure to be outrageous Triangle of Sadness, directed by the auteur du provocation (forgive my mangled French but he's Swedish anyway) Ruben Östlund.

In between, the usual gang of idiots -- kidding! -- have programmed a sumptuously incredible lineup of genre goodness that will delight all who can attend. The lineup includes 21 World Premieres, 14 North American Premieres, and 21 U.S Premieres. The festival will run from September 22-29 and on the web via a virtual FF@Home experience from September 29-October 4.

As usual, there are far too many highlights to summarize in just a few words, so allow me to cherry-pick a few: Park Chan-wook (Decision to Leave is his latest) "will be present at Alamo Drafthouse South Lamar to accept a lifetime achievement award from Fantastic Fest in celebration of his mind-bending, artfully-crafted body of work." So says the official announcement, and I trust their words.

Other World Premieres include Noah Segan's directorial debut, Blood Relatives, described as "a father-daughter vampire comedy from Shudder," Dark Side of the Ring co-creator Jason Eisener's Kids vs. Aliens, which sees "a group of friends face off against evil space invaders," and "an anthology horror film featuring many Fantastic Fest alumni, Satanic Hispanics, from Epic Pictures."

This year, I've actually already seen several films that will be screening at the fest, thanks to the Neuchatel festival in Switzerland, and can recommend all three. You can find my reviews linked below for Japanese gangster picture Bad City, Taiwanese puppet movie Demigod: The Legend Begins, French thriller Year of the Shark, and Japanese kaiju movie Shin Ultraman. I've also seen the great Joint Security Area, about 20 years ago, and look forward to Arrow Film's new restoration.

As Mayor Deebs (Fred Willard) said in Steve Martin's Roxanne, "I would rather be with you people than with the finest people in the world." Visit the Fantastic Fest official site for all the details, especially about the parties and special in-person events.

More about Triangle of Sadness

More about Year of the Shark

More about Demigod: The Legend Begins