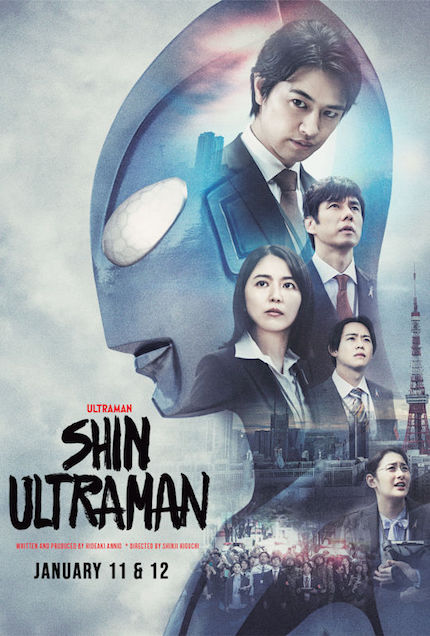 Let's start with an invisible monster who eats electricity and go from there.

As my intellectually-superior boss, editor, and founder of this site, Todd Brown, wrote more than 10 years ago: "Ultraman remains the most enduring and popular of Japan's giant monster battling heroes because the Ultraman pictures remain simply more fun than those featuring any other hero going."

As I myself admitted back in 2019: "I am definitely not someone who knows much at all about the character." That being said, I enjoyed the new series that streamed on Netflix at the time, although I was surprised at the violent content that pushed the self-rating a bit.

Writer Anno Hideaki and director Higuchi Shinji, who teamed on Shin Godzilla (2016) to refashion the character from the original Japanese perspective, have now teamed up to reboot Ultraman. Different from their take on The Big Guy, in which they delayed his introduction so as to focus on the cultural, political, and philosophical implications, they begin Shin Ultraman with crowd-pleasing kaiju battles, introducing Invisible Monster Neronga, who eats electricity, and Gabora, an underground kaiju, who are defeated by a silver giant, soon revealed in familiar garb as our old friend Ultraman.

The S-Class Species Suppression Protocol (SSSP) is charged with keeping all the kaiju in check, and they don't know quite what to make of Ultraman. We're led into their daily machinations by the newly-arrived Asami (Nagasawa Masami), a public security officer from the intelligence agency who's been transferred into the SSSP. She is paired with super-logical Kaminoga (Saitoh Takumi), whose true identity is revealed soon enough.

The early kaiju battles give way to an investigation by the SSSP into Ultraman and whether he is a hero or a villain, which is complicated by Zarab, an extraterrestrial who takes human form and fouls everything up for the good-hearted Ultraman. The good-natured cast makes the incessant talking quite enjoyable as they investigate further and are caught up in the infuriating bureaucracy of international politics.

What keeps it all bouncy good fun is the continual forward momentum propelled by director Higuchi Shinji and the likability of the characters, both leading and supporting. Ultraman is an appropriately stoic leading man who is preoccupied with saving the human race, despite all our foibles, as well as our determination to drive ourselves into extinction.

But not on Ultraman's watch! The lively pace makes it easy to watch and the spirit generated by Ultraman and his steely determination to do what's right proves to be quite infectious. Silver giants are go!