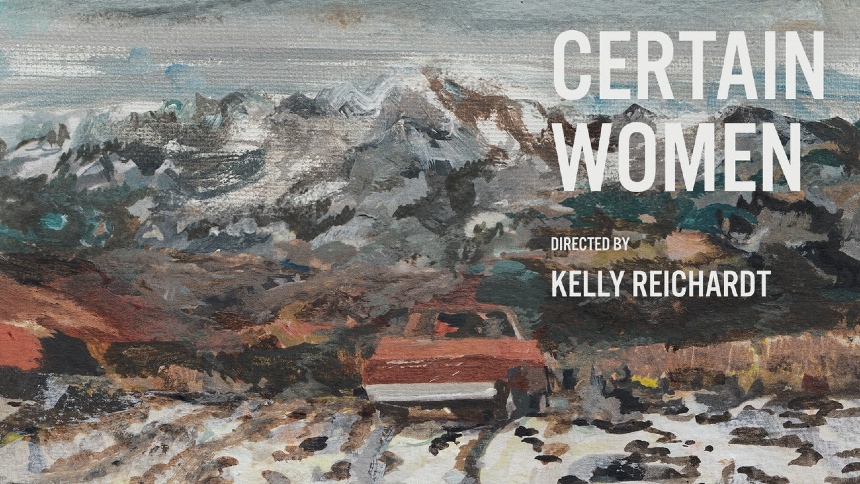 Certain Women signals that American indie auteur Kelly Reichardt is back in form.

In my opinion, Night Moves, her attempt at an eco-thriller starring Jesse Eisenberg and Dakota Fanning, was a small misstep in her otherwise spotless filmography. Her strength lies in her minimalist approach to depicting the inner lives of lonely people inhabiting her beloved Pacific Northwest, not in complicated plots or building up tension or presentation of violence.

If her newly restored/rediscovered debut film Rivers of Grass gave a nod to Bonnie and Clyde and old noir films, with Certain Women, Reichardt does Altman -- an ensemble cast and loosely connected stories, based on short stories (by a Montana Native, Maile Meloy). But it's still very much Reichardt's film: with muted tones, a sense of melancholy and loneliness, Certain Women excels at dramatizing small, minimalistic character studies that are distinctly small town Americana. Also, many of her films placed women in precarious situations to observe, but I think this is the first time that she is exclusively telling women's stories.

Laura's story has to do with a client of hers, a disgruntled mechanic (Jared Harris) who was injured at the job, but took an early settlement. So he can't sue his former employer. He keeps coming to her office, asking her to check his file again and again. Until she takes him to another lawyer for the second opinion on the case, fully knowing that the other lawyer is going to tell him what she's been telling him for months: he doesn't have any recourse; he lost.

Harris gives an extremely sympathetic performance as a man who has lost everything because of his injury and is trying to hold on to some kind of human connection. Because Dern is attractive, attentive and warm, and because he's lonely and desperate, he just wants to prolong their futile if sexist relationship. The hostage situation ensues. It is beautifully drawn by Dern, who deftly handles sexism without losing her humanity and compassion.

Gina, a high-strung woman married to a mild-mannered, less assertive husband (James Le Gros) and an unresponsive teen daughter, is trying to build a new house for her family. She wants to have a good foundation and is attempting to ask a local kook, if he could sell her a pile of historical sand stone bricks on his otherwise barren lot. The old man doesn't like her sassy attitude and her husband isn't helping much to persuade the man.

Her attempt at building a harmonious family is failing and as we the audience know something she doesn't, it involves her husband. It's delicate, fine-tuned, unhurried storytelling and all the actors involved are fantastic. Michelle Williams might play the least sympathetic character of the three, but she does a very convincing job as a tough businesswoman who has to act a certain way to survive, never letting her guard down.

The most poignant story follows Jamie, a lonely horse ranch hand in the remote town of Belfry. She leads an uneventful, repetitive life, looking after horses day after day. One night she follows some folks into a classroom and meets Beth, a brand spanking new teacher on her first day, reading off an index card full of information on school laws.

She is instantly attracted to Beth and they go to a local diner before Beth drives off to Livingston, a two-hour commute she has to make every Tuesday and Thursday. The only reason Beth, a law school student who also works at a shoe store, took the job is because she thought she got the job at Belgrade, about thirty minutes from Livingston, not Belfry.

Now Jamie has something to anticipate. Their brief late night diner encounters become some kind of ritual, at least for Jamie. They have a moment when Jamie takes Beth to the diner on a horseback. But Beth doesn't show up for the next class and Jamie is told that due to a long commute time, Beth is no longer coming back. On impulse, Jamie drives up to Livingston the same night, in the hopes of seeing Beth again.

Stewart, who's been shedding her teen-idol image by choosing various interesting roles, continues to impress here, playing a straight-laced, awkward young woman whose presence is still magnetic. But she takes a step back, allowing clear-eyed Lily Gladstone to shine in her role. Gladstone's depiction of an ordinary woman with a crush and heartbreak is beautifully realized. Her silent gaze alone speaks volumes.

With the exception of the presence of cell phones, Certain Women has that distinctive, melancholic, 70's American movie vibe. Reichardt masterfully draws these sad and poignant human encounters with the help of director of photography Christopher Blauvelt, who has collaborated with her since Meek's Cutoff, lensing underpopulated, Ed Hopper-ish small towns and the beautiful scenic vistas of Montana. Perfectly tuned for its quietude imbued in loneliness and longing, Certain Women is certainly one of her finest films to date.

Review originally published when Certain Women opened theatrically in the U.S. in October 2016. The film has also been released on Blu-ray, reviewed by Matt Brown. Certain Women is now streaming on The Criterion Channel.