Criterion in September 2017: FESTIVAL, THE PIANO TEACHER, REBECCA and More 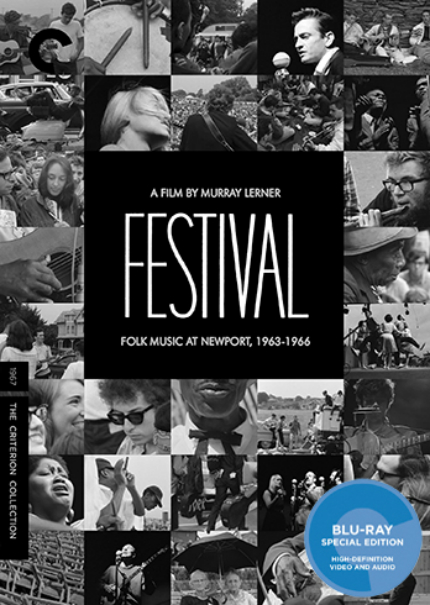 A varied bag of goodies await fans of the Criterion Collection in September.

Digging back into the musical thrills of the mid-1960s, Murray Lerner's documentary Festival examines the Newport Folk Festival from 1963-1966, when the very idea of "folk music" was undergoing a galvanic redefinition. The new disk will include additional footage from the festivals, which showcased the likes of Bob Dylan, Joan Baez, Johnny Cash and the Staples Singers.

Perhaps appropriately for the early days of the fall school term in North America, Michael Haneke offers twisted lessons in The Piano Teacher, starring Isabelle Huppert. And we can all learn a lot from watching Alfred Hitchcock's first Hollywood production, Rebecca, which demonstrated that gothic melodramas could be quite thrilling.

Read on for all the details; verbiage below all comes courtesy of the scribes at Criterion.

REBECCA
Romance becomes psychodrama in Alfred Hitchcock's elegantly crafted Rebecca, his first foray into Hollywood filmmaking. A dreamlike adaptation of Daphne du Maurier's 1938 novel, the film stars the enchanting Joan Fontaine as a young woman who believes she has found her heart's desire when she marries the dashing aristocratic widower Maxim de Winter (played with cunning vulnerability by Laurence Olivier).

But upon moving to Manderley - her groom's baroque ancestral mansion - she soon learns that his deceased wife haunts not only the home but the temperamental, brooding Maxim as well. The start of Hitchcock's legendary collaboration with producer David O. Selznick, this elegiac gothic vision, captured in stunning black and white by George Barnes, took home the Academy Awards for best picture and best cinematography.


FESTIVAL
Before Woodstock and Monterey Pop, there was Festival. From 1963 to 1966, Murray Lerner visited the annual Newport Folk Festival to document a thriving, idealistic musical movement as it reached its peak as a popular phenomenon. Joan Baez, Bob Dylan, Howlin' Wolf, Johnny Cash, the Staples Singers, Pete Seeger, Son House, and Peter, Paul and Mary were just a few of the legends who shared the stage at Newport, treating audiences to a range of folk music that encompassed the genre's roots in blues, country, and gospel as well as its newer flirtations with rock 'n' roll.

Shooting in gorgeous black and white, Lerner juxtaposes performances with snapshot interviews with artists and their fans, weaving footage from four years of the festival into an intimate record of a pivotal time in music-and in American culture at large.


CERTAIN WOMEN
The expanses of the American Northwest take center stage in this intimately observed triptych from Kelly Reichardt. Adapted from three short stories by Maile Meloy and unfolding in self-contained but interlocking episodes, Certain Women navigates the subtle shifts in personal desire and social expectation that unsettle the circumscribed lives of its characters: a lawyer (Laura Dern) forced to subdue a troubled client; a woman (Michelle Williams) whose plans to construct her dream home reveal fissures in her marriage; and a night-school teacher (Kristen Stewart) who forms a tenuous bond with a lonely ranch hand (Lily Gladstone), whose unguardedness and deep attachment to the land deliver an unexpected jolt of emotional immediacy.

With unassuming craft, Reichardt captures the rhythms of daily life in small-town Montana through these fine-grained portraits of women trapped within the landscape's wide-open spaces.

DIRECTOR-APPROVED SPECIAL EDITION FEATURES
* New 2K digital transfer, supervised by director Kelly Reichardt and cinematographer Christopher Blauvelt, with 5.1 surround DTS-HD Master Audio soundtrack on the Blu-ray
* New interviews with the film's cast and crew, including Reichardt and executive producer Todd Haynes
* New interview with Maile Meloy, author of the stories on which the film is based
* Trailer
* PLUS: An essay by critic Ella Taylor


THE PIANO TEACHER
Academy Award-winning Austrian director Michael Haneke shifted his focus from the social to the psychological for this riveting study of female sexuality and the dynamics of control, an adaptation of a controversial 1983 novel by Elfriede Jelinek. Haneke finds his match in Isabelle Huppert, who delivers an icy but quietly seething performance as Erika, a middle-aged piano professor at a Viennese conservatory who lives with her mother, in a claustrophobically codependent relationship.

Severely repressed, she satisfies her masochistic urges only voyeuristically until she meets Walter (Benoît Magimel), a young student whose desire for Erika leads to a destructive infatuation that upsets the careful equilibrium of her life. A critical breakthrough for Haneke, The Piano Teacher - which won the Grand Prix as well as dual acting awards for its stars at Cannes - is a formalist masterwork that remains a shocking sensation.


DAVID LYNCH: THE ART LIFE
A rare glimpse into the mind of one of cinema's most enigmatic visionaries, David Lynch: The Art Life offers an absorbing portrait of the artist, as well as an intimate encounter with the man himself. From the privacy of his home and painting studio in the Hollywood Hills, a candid Lynch conjures people and places from his past, from his boyhood in Idaho and Virginia to his experiences at art school in Boston and Philadelphia to the beginnings of his filmmaking career in Los Angeles-in stories that unfold like scenes from his movies.

This remarkable documentary by directors Jon Nguyen, Rick Barnes, and Olivia Neergaard-Holm reveals the story behind Lynch's early years as a painter and director drawn to the phantasmagoric, while also illuminating his enduring commitment to what he calls the "the art life": "You drink coffee, you smoke cigarettes, and you paint, and that's it."