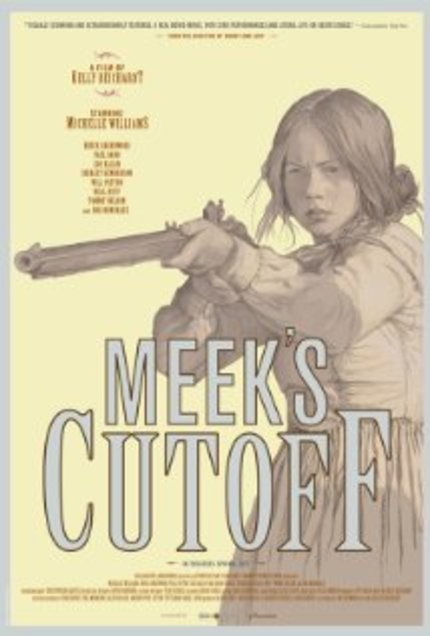 From the stark practicality of its needlepoint opening title shot, director Kelly Reichardt makes it plain and clear that "Meek's Cutoff" is not your ordinary film. From its tellingly sparse use of musical scoring (giving creaky vibrancy to the constant wagon wheel monotony) to the cloistered 1.33:1 aspect ratio, the film makes a point to announce itself as something other than what we're used to, even in a genre we don't see much of these days. Although it takes place a good twenty-plus years before most films of its genre, (it's 1845, as opposed to the post-Civil War time frame that is conventional) this is most definitely a Western, and of the existential variety, at that. As cold and remotely existential as a tangibly hot desert-bound tale such as this could be.

"Meek's Cutoff" tells not so much a story as a journey. It is one with no real beginning and maybe no end, although the physically and soul-weary travelers have clearly been on the trail for a very long time, and collectively seem to harbor some rare, desperate hope that they may one day reach a suitable permanent stopping point. Their default leader, one Stephen Meek (Bruce Greenwood) has gotten them lost in a sun-baked no man's land of perpetual cracked-soil drought. Their lack of water has the small multi-family conglomeration at their wits-end, low on energy and perhaps sanity. However, this being the American frontier, they trudge onward - what other choice have they?

Meek, as a leader and as a man, is the kind of boisterous bully who is just well spoken and intelligent enough to be dangerous. When the crew comes upon a Native American man who might be able to help them (played by stuntman and actor Rod Rondeaux), Meek's comparative eloquence in detailing his deep distrust of Indians gives way to a horribly uncomfortable situation, one of which there is no simple way out of. Although modern audiences can spot Meek's poisonous racism from a multiplex away, Reichardt makes it convincing that these heat-striken travelers, in their sweat-drenched ground-length dresses, bonnets, hats, suspenders and other ridiculously modest attire straight out of "Little House on the Prairie" would give this guy's leadership the time of day.

"Meek's Cutoff", with all of its painfully deliberate aimless wandering and rustic tensions, is almost the movie it wants to be. The main problem (and its an inescapable one) is that basic characterization suffers as the metaphor and message dominate the intellectual forefront of the film, keeping the entirety of the story at an emotional arms-length. This is highly unfortunate, considering the rustic lengths that Reichardt and company went to in order to achieve the feel of period accuracy. But despite the anti-glamorous location shoot and no-frills wardrobe, it remains difficult to truly lose ones self in "Meek's Cutoff".

Michelle Williams, queen of the gut-wrenchingly challenging indy film, re-teams with director Reichardt following "Wendy and Lucy" to play one of the few legitimately fleshed-out characters on this somber caravan. As a patient yet headstrong woman who knows her way around a shotgun, Williams' character exhibits slow-burn resentment for Meek, and stands as the film's only true hope that someone may eventually stand up to the big bully. When the opportunity finally arrives, it speaks more as a proto-feminist pronouncement than the authentic actions of a woman at the end of her rope. That said, it manages to work well enough nonetheless.

It's interesting that in its thorough attempt to be an authentic commentary on the human condition, "Meek's Cutoff" forgets quite often to reflect humanity. While one would never expect this exhausted bunch to break out the fiddle and square dance ala most any John Ford Western, their reserved natures and overwhelming quietness result in an emotional barrier between we the viewers and them. But still, it must be said that "Meek's Cutoff", the odd cinematic wagon train that it is, has enough other things going for it to warrant a look. Exhaustive location Westerns are a rare treat in any form, even one literally as square (academy ratio!) as this one is.