Kelly Reichardt's beautiful tale of memory and friendship, now released on a lovely Blu-ray from the Criterion Collection. 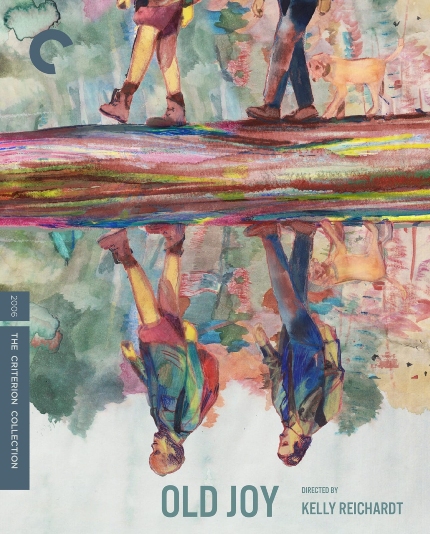 Daniel London and Will Oldham star in a quiet, charming, sensitive and moving drama, filled with terrific moments of insight and contemplation.

Old Joy
Now available from The Criterion Collection on Blu-ray and DVD.

Then: Late June, Los Angeles. 2006. In a small venue during the Los Angeles Film Festival, I sat on an uncomfortable chair, transfixed, as the gentle rhythms of Kelly Reichardt's second feature film unfurled. Certain moments relaxed into my brain. A feeling of peace was planted, nourished by the low-key musical score and performances that felt documented more than enacted.

Through the years: Kelly Reichardt's films (Wendy and Lucy, Meek's Cutoff, Night Moves, Certain Women) continue to cast a spell upon me.

Now: Early December, Dallas. 2019. In my small apartment, I sat on an uncomfortable chair, transfixed once again. The rhythms are more familiar, naturally, though no less effective in casting a spell upon me. What was intended to be a quick, initial sample of the video quality of the new Blu-ray from the Criterion Collection easy stretched into a very enjoyable viewing of a film that holds up well to further inspection.

Longtime friends Mark (Daniel London) and Kurt (Will Oldham) head off on an impromptu trip to the Bagby Springs in Oregon. Once close pals, the two find themselves in different places in their lives. Mark has settled into a relationship with Tanya (Tanya Smith) in Portland; they have a house, Tanya is pregnant, and things are fine. Kurt remains a wanderer at heart, a single man, constantly traveling, with no fixed abode.

The trip is short -- two days, driving in a car and hiking in the woods -- yet it's enough time to allow each of them to think about life, love, and each other. Will the trip bring them closer together again? Or will it highlight their continuing differences?

Mark and Kurt travel through (mostly) beautiful countryside and lush, lovely, thick woods. The road they travel, by car and by foot, is sparsely populated. Their only other company is Mark's friendly dog, Lucy, who would later appear in Reichardt's Wendy and Lucy.

Beyond the humans and the canine, however, the natural world is an independent character of its own. Without the distractions of other people, or the internet, or even the availability of media devices, Old Joy invites introspection and contemplation. Reichardt, who also edited the film, crafts a narrative that allows welcome breathing space for the characters, as well as the viewer.

Nothing ever feels rushed, nor does it feel slack. Every minute counts and every moment means something. What, exactly, that may be is left entirely up to the viewer.

The Criterion Collection's Blu-ray looks marvelous, featuring a new 2K digital restoration with an uncompressed stereo soundtrack. The film was shot in 16mm and appears immaculate.

The disk includes several new interviews, all newly produced. Daniel London and Will Oldham reunite for the first time since filming to talk about the casting process and their experiences making the movie. It's a warm and friendly conversation. (23 min.)

Director Kelly Reichardt explains the genesis of the project, stemming from her working relationship with filmmaker Todd Haynes and her interest in adapting a story by author Jonathan Raymond after reading his first novel. She also covers the experience of making the film with a crew of five (?!) with no expectations, save for the hope that it would be seen by others one day. (19 min.)

Author Jonathan Raymond talks about meeting Reichardt, the additions and subtractions she made to his story in the screenplay, which is credited to both of them, though he says that she did "the lion's share" of the work. He also touches on the working relationship that they developed on the film, leading to future collaborations (Wendy and Lucy, Meek's Cutoff, Night Moves, First Cow). (10 min.)

Director of photography Peter Sillen gets into the nitty-gritty of making an independent feature with a tiny crew and limited resources, as well as the many things he enjoyed about the production and the people. He also reminiscences about watching the finished film for the first time.

This edition also includes a printed booklet with an essay by film critic Ed Halter and the original short story by Jonathan Raymond, which is especially rewarding to read after watching the film.

The film is also available to stream via The Criterion Channel.

Do you feel this content is inappropriate or infringes upon your rights? Click here to report it, or see our DMCA policy.
Criterion Blu-rayDaniel LondonKelly ReichardtWill Oldham