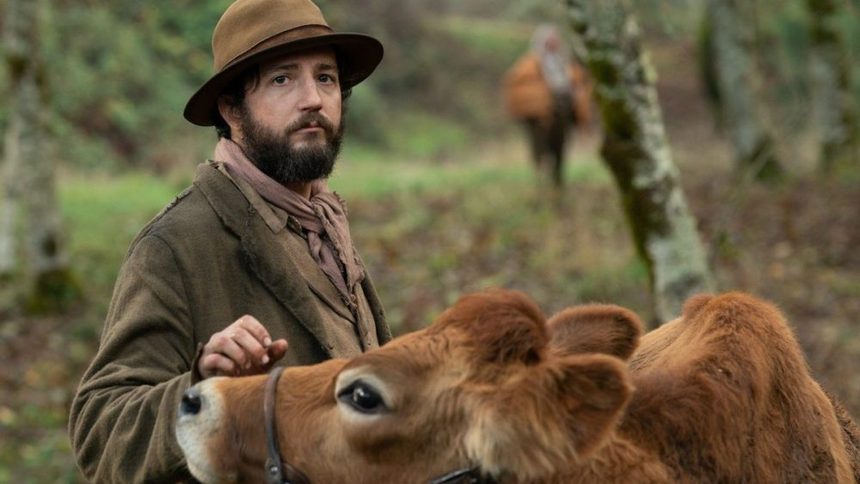 I'm reluctant to put anyone in a number one spot, but I will say, if there was one for American filmmakers currently working, Kelly Reichardt would be that (let alone one of the world's best current filmmakers). I can't think of anyone who understands better how to articulate and present friendship, that essential human necessity. First Cow is her second period film set in the Old West (Meek's Cutoff being the first), and explores not only friendship, but the hardships of the old west, the growing constraints that capitalism and a strict class system place on those not were unlucky in birth, and how isolation can bring both suffering and joy, if you find the right people.

Based on the novel The Half-Life written by Reichardt's screenplay collaborator John Raymond, the film opens in contemporary times, with an unnamed woman finding two skeletons side-by-side in a lonely field in Oregon. Then moving nearly two hundred years in the past, we meet "Cookie" Figowitz (John Magaro), a drifter from the east, working as a (not entirely successful) cook for a trapping company. Cookie has almost nothing to his name, and seems out of place in a mostly still untamed west, where comforts are few and the men are rough to say the least.

Cookie meets a Chinese immigrant, King Lu, under rather odd circumstances, and their similiar, somewhat desperate situations draw them together. Cookie trained as a baker, and King Lu puts his busines acumen to work. They can sell Cookie's biscuits at the local fort, but they're missing a key ingredient: fresh milk. As luck would have it, local British landowner and chief factor (Toby Jones) has brought the first cow in the territory to his land, and the two friends start sneaking to the meadow every night and stealing milk. Cookie's biscuits quickly become a popular item, allowing the men to save money to hopefully move on better circumstances.

Both men know that, for people like them, without any familial connections or status, that there only hope is to try and live a reasonable enough life off their labour; and even then, that dream is only attainable under dubious means. Their connection might at first come out of necessity, from a few small kindnesses and complementary skills, but their bond grows out of genuine affection and admiration. This is a world where genuine connections, particularly between men, are scarce: it's still dog-eat-dog, with even the most basic necessities hard to come by, and as shown in the supporting characters, resentments, anger, and class control still hold sway, leaving people like Cookie and King Lu behind.

Reichardt is very much an actor's director; not only does she assemble a great cast for all her films, but she knows how to emphasise their strengths, particularly in scenes without dialogue, and in capturing emotion in close-up. Magaro's Cookie finds it hard to keep up the hard face that this old west requires, leaving him vulnerable, with both his melancholy and fleeting moments of pride etched in his eyes. This is reflected in Lee's King Lu, who might seem a bit more stalwart at first, but his own pride and confidence grow as his friendship with Cookie deepens. (And yes, apparently Reichardt did look at many headshots of Jersey cows to find just the right one, and I dare anyone not to love that cow and its friendship with Cookie).

Reichardt is also a filmmaker who assembles a terrific design team. As in Meek's Cutoff, she and cinematographer Christopher Blauvelt use a 4:3 aspect ratio; while at first this might seem odd given the importance of landscape and living so closely with the natural world, it evokes an intimace and immediacy. For people like Cookie and King Lu, nature might afford some protection, but more dangers; they're more likely to survive in a populated setting, and they keep close together to create that affect.

With too many period films, I feel the artifice of the production and art design, the set and costumes; I find it too hard to be lost in the time period as I'm constantly aware these sets/costumes etc are inauthentic. Not so with First Cow; the mismatching of clothing articles, the attention to not only detail, but the feel of the sets made me forget that I was watching something set 200 years ago. I could feel the cups, the handles of the pans, I could taste the biscuits, I could feel the clothing as if I was wearing it, right down to Cookie's boots.

Too many films about friendship between men show them reverting to ridiculous competition or in constant action and displays of physical prowess. As she has previously shown in Old Joy, Reichardt knows that the needs of the human heart and the friendship that can exist between men is just as intimate as that between women. First Cow plays like a beautiful fable, a tale told around a campfire on a lonely night, a quiet and moving story about how two friends found and helped each other out of loneliness and desparation.

First Cow will be released in the USA on Friday, March 6th, in Canada on Friday March 20th, and hopefully other territories soon.