Let this review guide you to MEEK'S CUTOFF 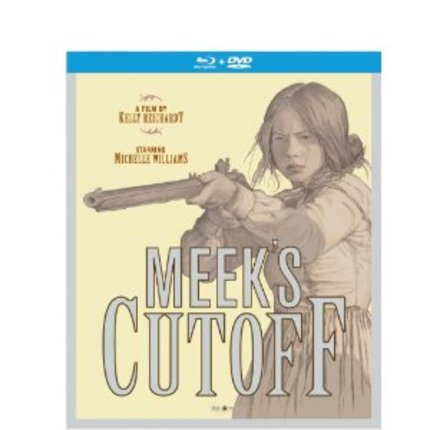 One of the truly great films I saw this year was Meek's Cutoff. The news that it would be released on Blu was great indeed. Shot in a 1:37:1 aspect ration this existential western is visually stunning not just because of where it takes place, the treacherous and stark Oregon Trail, but because when the camera isn't trained on the landscape it's trained on some of the great actors working today. Paul Dano, Shirley Henderson , Michelle Williams bring their A game but they barely stand out in a cast full of actors who play their roles like a last stand. Particularly good is Bruce Greenwood, almost unrecognizable as the mountain man guide.

A group of families hire a mountain man to lead them over the Cascade Mountains. Soon they are lost, and running out of provisions. The mountain man insists he knows the way but as they decide whether to follow him they capture an Indian. Think Waiting For Godot meets The Searchers (1956) and you have a good idea of the raw tension and suspense generated here. Meek's Cutoff is by turns elegiac and full of slowly realized poetry but it is never boring to a viewer that gives itself over to the plight of the characters.

Director Kelly Reichardt come out of nowhere with this instant classic. Her previous films, River of Grass (1994), Old Joy (2006) and especially Wendy and Lucy (2008) were indeed strong character studies that took advantage of surroundign landscapes but she is near Fordian territory here with her monumental grasp of where the horizon belongs in the frame and in the story.

The bluray comes with a trailer,  making of featurette and packaging that features an essay by musician artist Richard Hell of of seminal original-wave punk band Richard Hell and the Voidoids