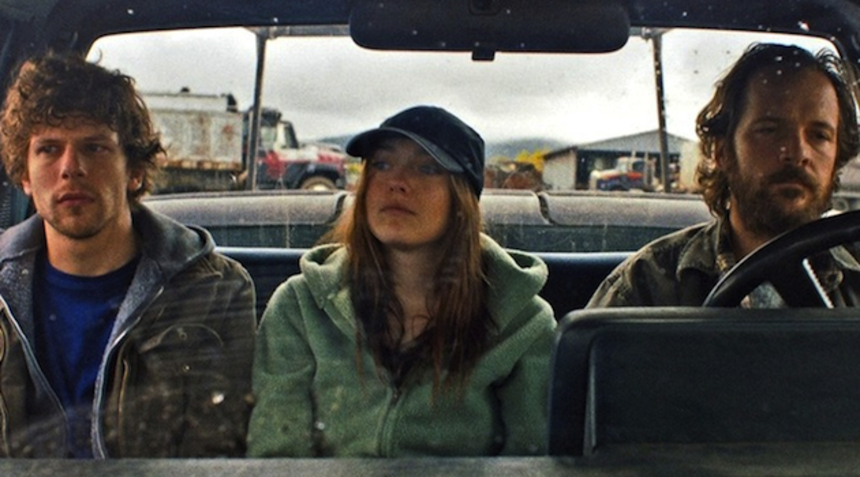 Those that have kept abreast of the American Indie scene the last 8 years or so, should know full well that Kelly Reichardt is a writer and director of considerable power, even when working in such minimalist aesthetics. While Old Joy, Wendy And Lucy, and Meek's Cutoff are wildly different films in subject matter -- from old friends on a sojourn, to a homeless young woman, and a group of lost settlers -- they all center around a certain kind of dispossessed feeling, that is somehow wholly American, and indeed very strange and unnerving.

Her latest film, Night Moves, stars Jessee Eisenberg, Dakota Fanning and Peter Sarsgaard as a trio of environmental activists who plan to blow up a dam. The film played to good buzz last fall on the festival circuit, including Toronto where our own Kurt Halfyard reviewed it. Kurt compared Reichardt's thriller to both Hitchcock and Clouzot, citing Sarsgaard at his "most Sarsgaard-ian", and concluding that it "may have a plot along the lines of a more conventional Hollywood thriller, but it's Reichardt's brand of filmmaking to the core.  As many have rightly observed, this tense, quiet thriller is a good initiation into her brand of filmmaking."

Cinidigm will be releasing the film stateside on May 30, so with that comes a trailer. By no means is it anything special, but it gets the job done without overstating anything. Check it out below.
Tweet Post Submit

Do you feel this content is inappropriate or infringes upon your rights? Click here to report it, or see our DMCA policy.
dakota fanningjesse eisenbergkelly reichardtnight movespeter sarsgaard