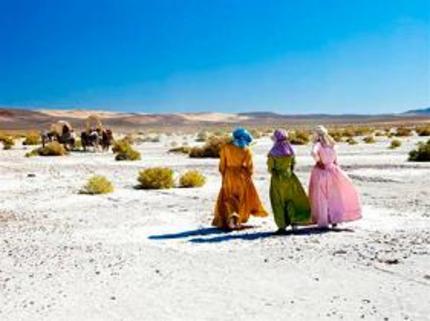 Woe betide anyone who turns up for Kelly Reichardt's Meek's Cutoff expecting anything like a typical Western. Languid, spare and dreamlike, other than the setting and the motif of a journey across vast, inhospitable stretches of America there's little else to tie the film down to any particular genre. The story of a band of settlers wandering across Oregon in 1845 who have to trust in their own strength of will when things look like going wrong, Reichardt lends the film her gift for intricate character studies and rural landscapes - as honed in acclaimed indie dramas Old Joy and Wendy & Lisa. But while Meek's Cutoff is a feast for the eyes, with some powerful performances from the leads, too much of the story (such as it is) seems to go precisely nowhere, and it's even more difficult to care when several of the protagonists are so needlessly irritating.

The caravan is only three wagons, led by Solomon Tetherow (Will Patton, The Fourth Kind, 24) and his wife Emily (Michelle Williams, Shutter Island, Blue Valentine) along with the Whites and the Gatelys. They've contracted trail guide Steven Meek (Bruce Greenwood), who's promised to lead them to a shortcut only he knows about that'll guide them safely through Indian territory. As the journey drags on, all the adults start having their doubts about Meek, who seems far more interested in telling tall tales of his exploits to the Gatelys' young son than actually getting the caravan anywhere. But when they manage to find an alternative, Meek's clearly not happy at them spurning his expertise, meaning the Tetherows have to find it in themselves to stand up to the man and keep the party together.

Meek's Cutoff develops at the slow, steady pace of a wagon journey, calm and methodical with occasional moments of frustration when things don't go to plan. In some respects this approach works incredibly well. Reichardt and her DP Chris Blauvelt set the mood in the opening sequence with some jaw-dropping panoramic shots (all the more surprising given they're not shooting in widescreen), including one slow, achingly beautiful Impressionist dissolve that could easily have gone on for twice as long. At the same time, the landscape serves as far more than painterly allusions - even before the party's water supply starts running low it's obvious this is a story about effort, with people sweating, straining and baking in the heat for precious little reward.

Patton proves reliable, consistent and unassuming as Solomon Tetherow, propping up the early going much as his character bolsters the other settlers. It's clear from their first few conversations Solomon genuinely values his wife's opinion, whether he agrees with her or not (where the other husbands are cut from far more typical cloth). So it feels relatively plausible when Emily starts taking the reins, so to speak. Michelle Williams all but walks away with the film, letting her resolve strengthen little by little until she finally backs Meek down for the first time, where Solomon's admiration for his wife's courage is an effective reflection of the quiet satisfaction the viewer feels at seeing the idiot get his comeuppance.

The trouble is Meek is so obviously an arrogant blowhard from the word go it's very difficult to buy into the confrontation as any kind of pivotal dramatic moment. While he's clearly dangerous to some degree, a man who'd happily kill another person to soothe his ego if he thought he could do it without consequence, he's still a petulant bully and flatly not that intimidating. Emily's standing up to him is worth applauding, but it never feels like enough to hang an entire film on - yet this seems to be what Reichardt's trying for. There are plenty of subtexts, themes and symbols turning over under the surface of the narrative, but they never really develop into anything more than vague gestures or enigmatic references.

Again, this is a film about effort - literal blood, sweat and tears - but given the Gatelys and the Whites are pretty much ciphers who only serve to emphasise how much Emily Tetherow is breaking from the norm by having hysterics at her impropriety, it's not as if that effort seems to count for anything. There's no sense of real camaraderie or bonds being forged. And while the ending centers on a symbol, something you could interpret as standing in for hope or the promise of greater things, it's over and done with in a couple of minutes, with the film simply trailing into nothing right after that. The story gives the impression Reichert wants the audience contemplating weighty themes - the pace, the artistry and the flow of events suggest it's supposed to be more than following these people from A to B - but the way the film plays out it never explores any of these ideas very far.

Meek's Cutoff is still more than worth a look, for anyone after a slow, dreamy, revisionist take on some time-worn Western tropes. It's a frequently beautiful film that demonstrates 4:3 can still be stunningly cinematic in the right hands, with another memorable performance from Michelle Williams no Dawson's Creek fan could ever have seen coming. But it still feels slight, almost empty, like a rough sketch for a larger, more expansive project. Consider it recommended, but bear that in mind.

(Meek's Cutoff was screened as part of the 17th Bradford International Film Festival, which ran at the UK National Media Museum from 16th-27th March 2011.)