Pretty Packaging: DUNE (The Lynch One) Gets An Extra Spicy Edition

Ard Vijn
Editor, Europe; Rotterdam, The Netherlands (@ardvark23)
Tweet Post Submit
Last year saw the belated release in cinemas of Denis Villeneuve's adaptation of Frank Herbert's epic novel Dune, and if I say it was generally well-received here it would be an understatement. Bring on the second half!

But Villeneuve's version is not the first. After Alejandro Jodorowsky famously failed to get a version made in the 1970s (itself the subject of a great film), studios were eyeing the property with trepidation, but when the Star Wars franchise became massively successful a new attempt was made. This film appeared in 1984 and was directed by David Lynch. I recollect it fondly. I was 15 years old, had recently read the book (after seeing the trailer for the film had piqued my interest), recognized all the characters, and loved its baroque designs. Colour-wise, Lynch' Dune beats Villeneuve's drearier version silly. I don't know why it bombed or why everyone panned the film back then, as me and my friends had loads of fun with it.

Apparently we were not the only ones though, as Arrow released a pretty Limited Edition last year. However, that one pales next to the Ultimate Edition which the German distributor Koch Films has just released. You get three versions of the film on Blu-ray (including my favourite version, the Spicediver Cut), and the theatrical on UHD. It contains all sorts of great goodies, has the feature-length documentary The Sleeper Has Awakened, and is mostly English-friendly too. This is the release to beat this year, so far, and I would be very surprised if I don't mention it in my end-of-year overview. It's an epic monster containing seven discs, and must be seen to be believed.

Therefore, here is a gallery of pictures of the thing. Click on the edge of the pictures to scroll through them, or at the centre of each to see a bigger version. 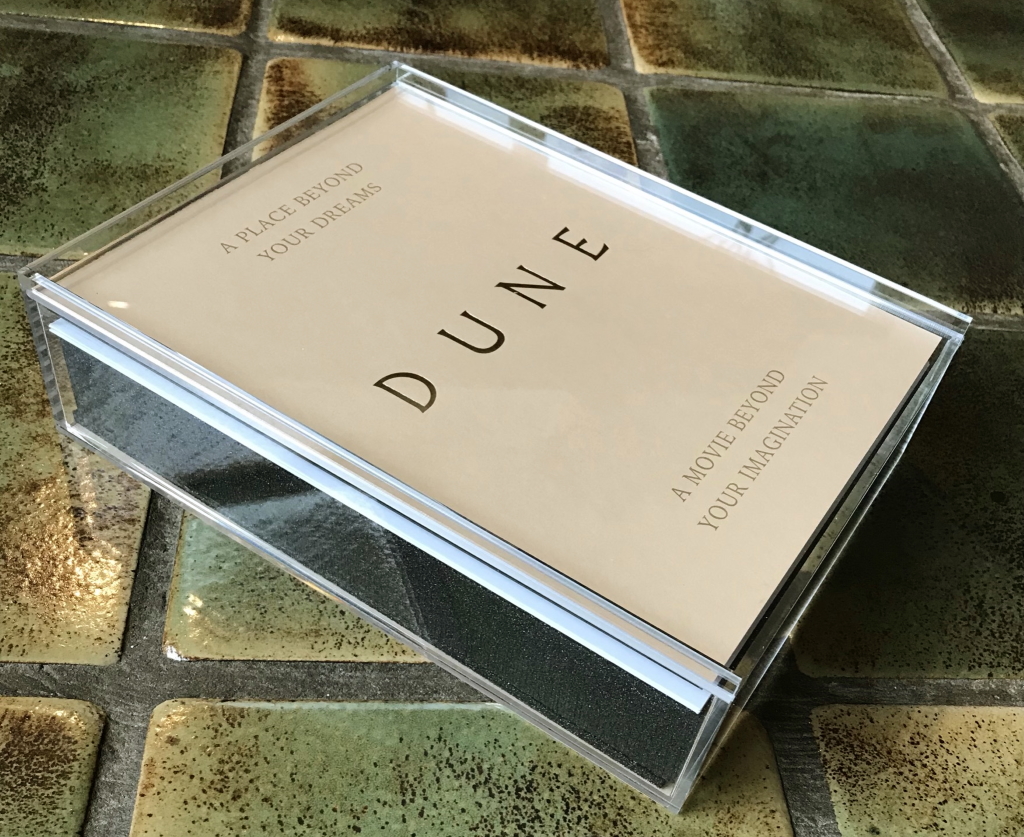 And here is the release: a big clear plastic box with a rather subtle front. Apart from its size, not really indicative yet of its fantastic contents. 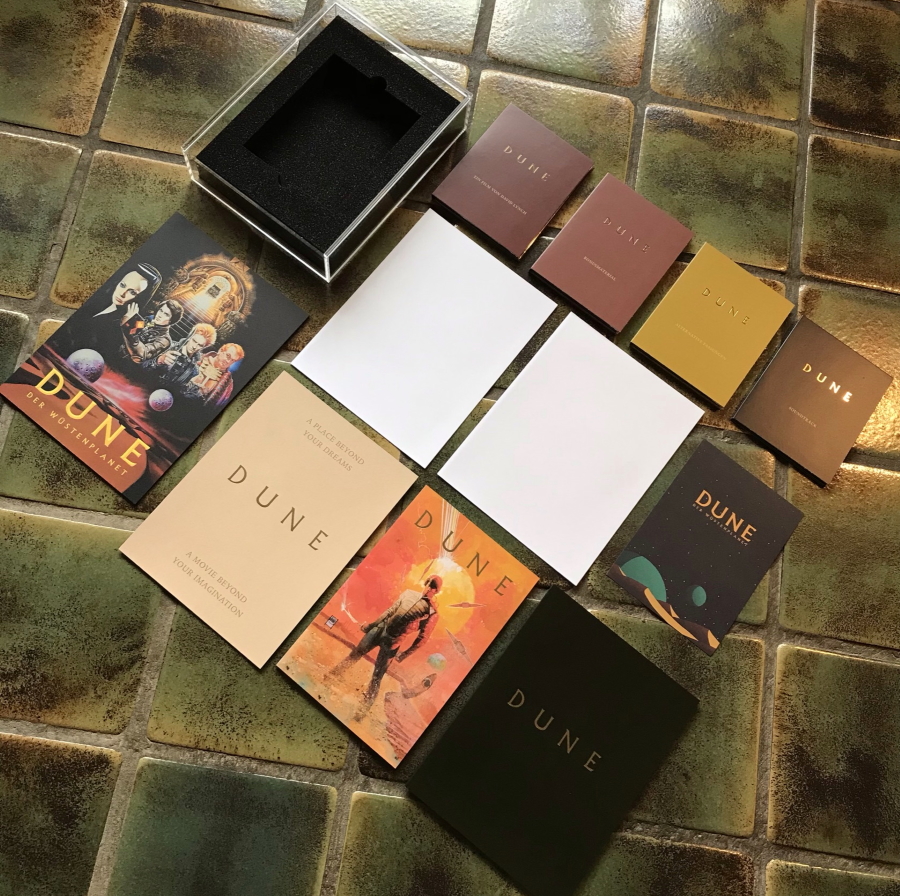 But slide open the box' lid and its contents come spilling out. You get two books, two posters, a reversible iridescent hardboard showing another two posters, a thank-you note... and four disc-holders. 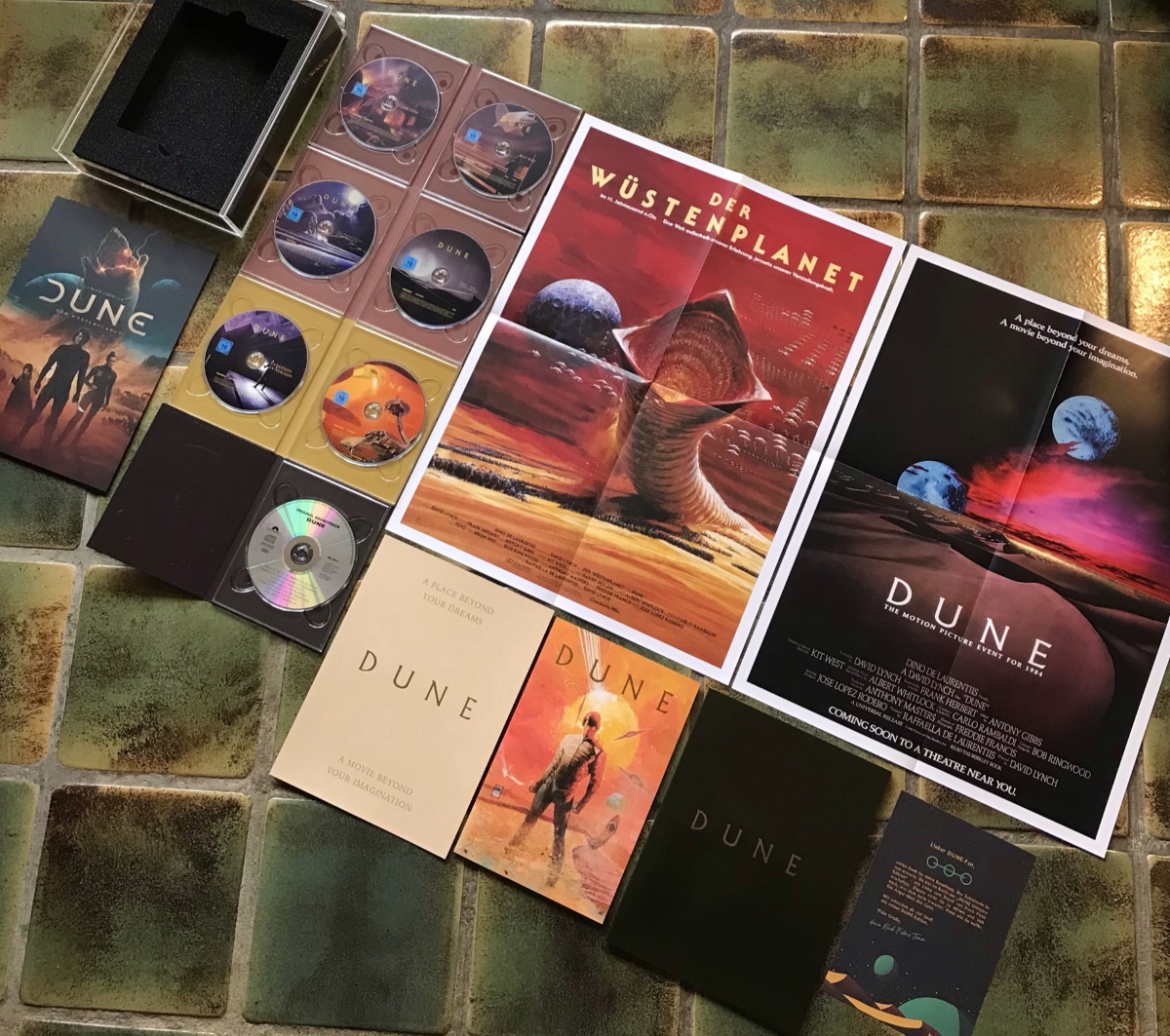 The contents opened and unfolded. Yes, that's seven discs.
One UHD, five Blu-rays and one CD. 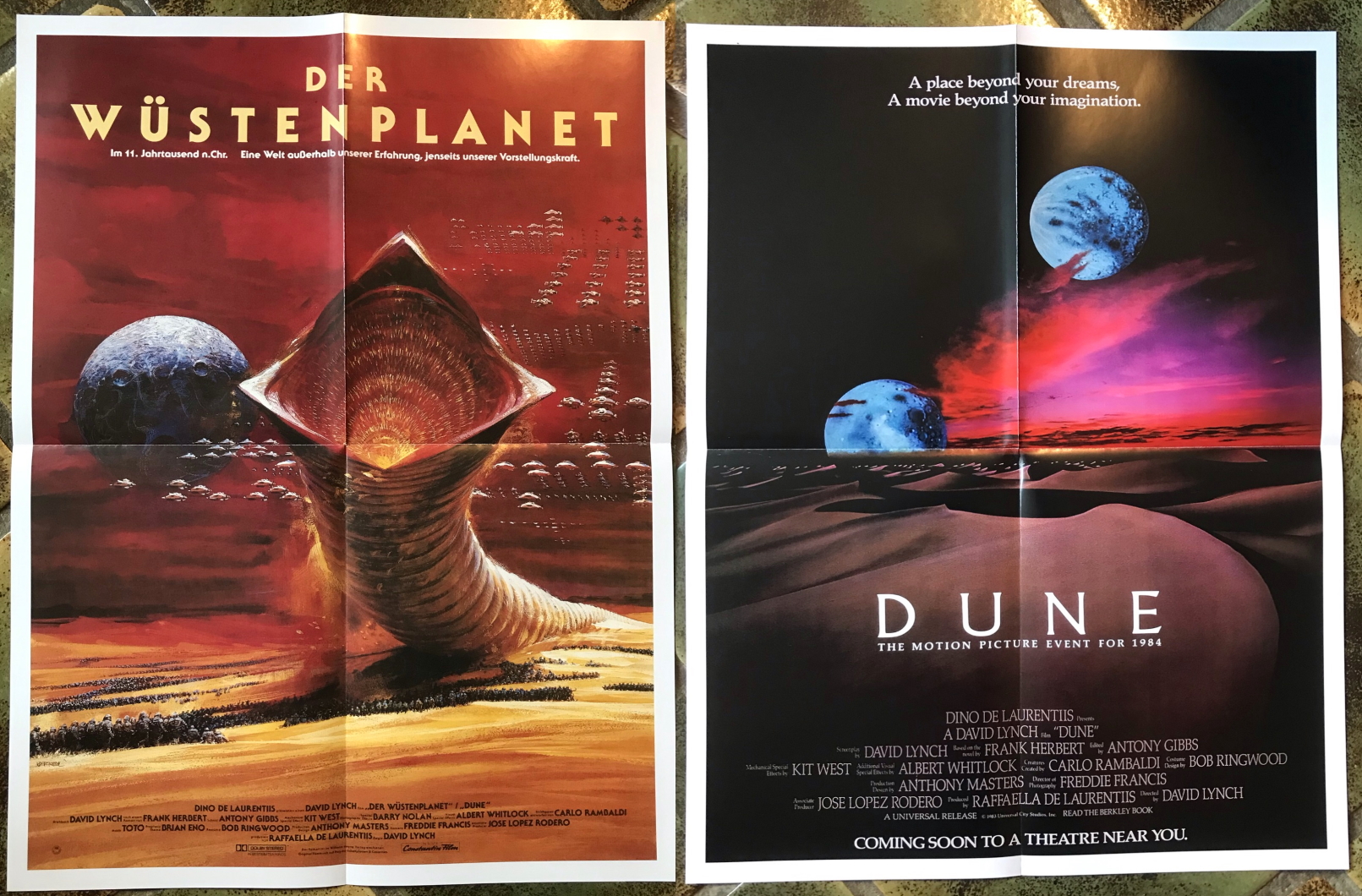 A closer look at the two posters. The right one is the known one I think, it sure was the one just here in the Netherlands.

But click the image for the large version and check the one on the left. Can you imagine being 15, a year after The Return of the Jedi disappeared from cinemas, seeing this poster at a cinema? Seriously, how could you NOT run in to see it?! 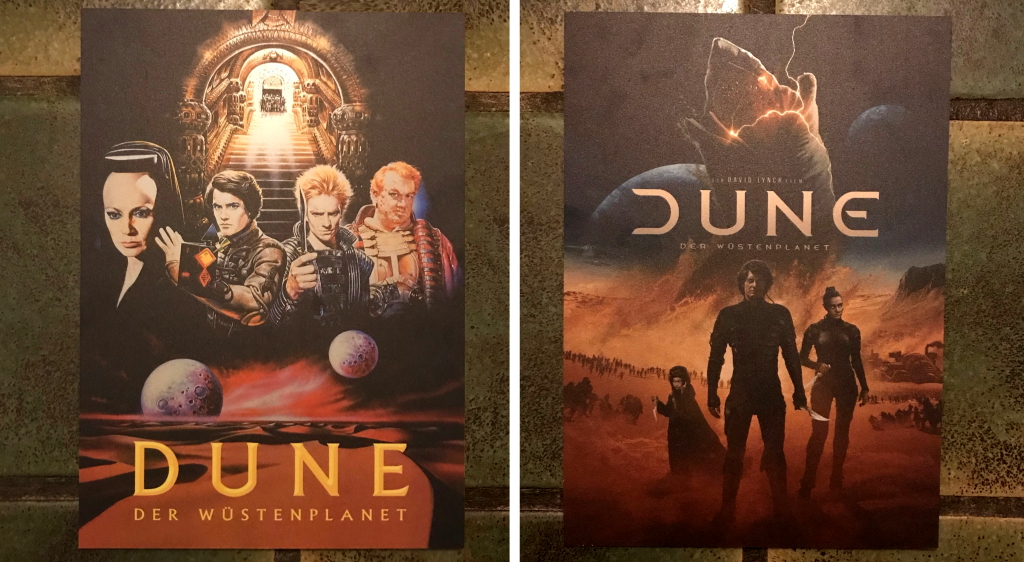 A closer look at both sides of the iridescent hardboard poster images. Nice, though I prefer the art on the real posters... 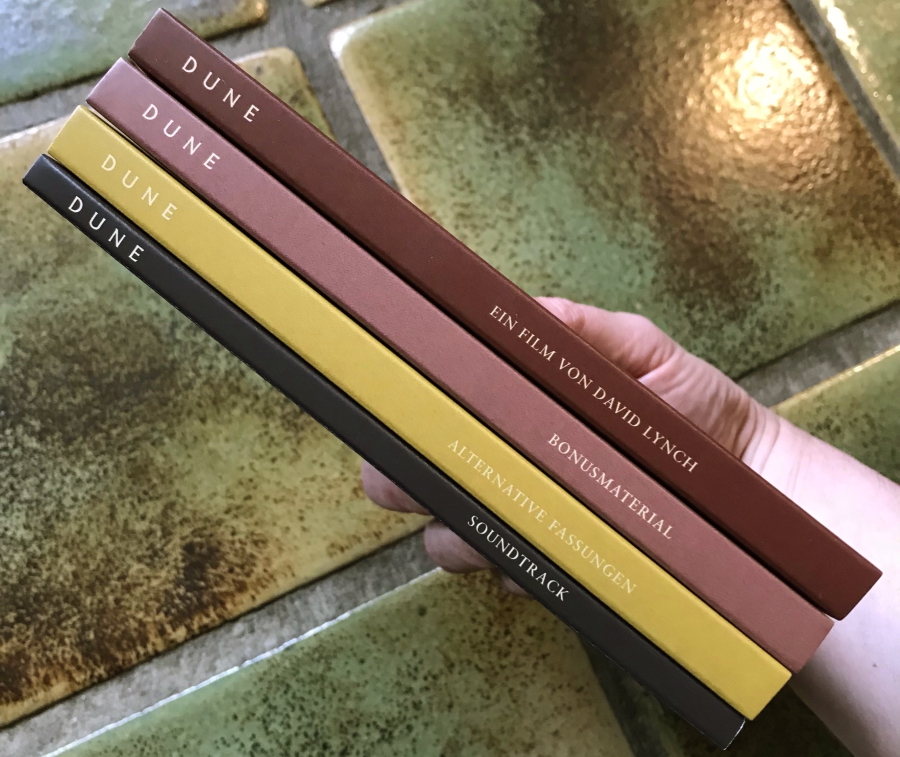 Here are the four disc-holders. 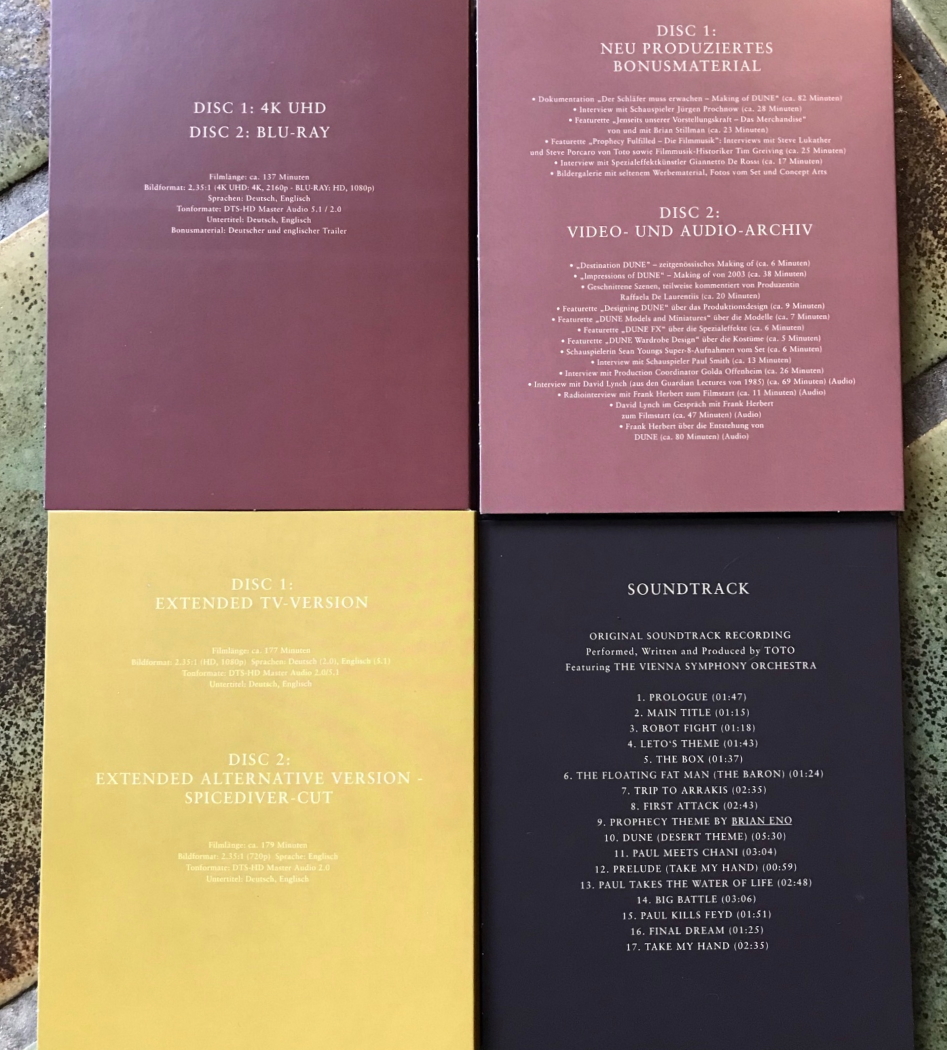 And this shows the contents (click on the image to be able to read it better). Rest assured there is lots to find on these discs. Some highlights:

-The feature-length documentary The Sleeper Has Awakened.
-The 177-minute disowned television cut in HD1080p.
-The 179-minute Spicediver fan re-edit in HD720p (which includes a completely different ending, much closer to the book's).
-A 47-minute audio conversation between David Lynch and Frank Herbert.
-A 69-minute audio interview with David Lynch.
-A 80-minute audio lecture by Frank Herbert on the book's conception.

I mean, this is all stellar stuff, on top of many mini-documentaries on effects, costumes, everything. And you get the CD of the film's soundtrack by Toto and Brian Eno. 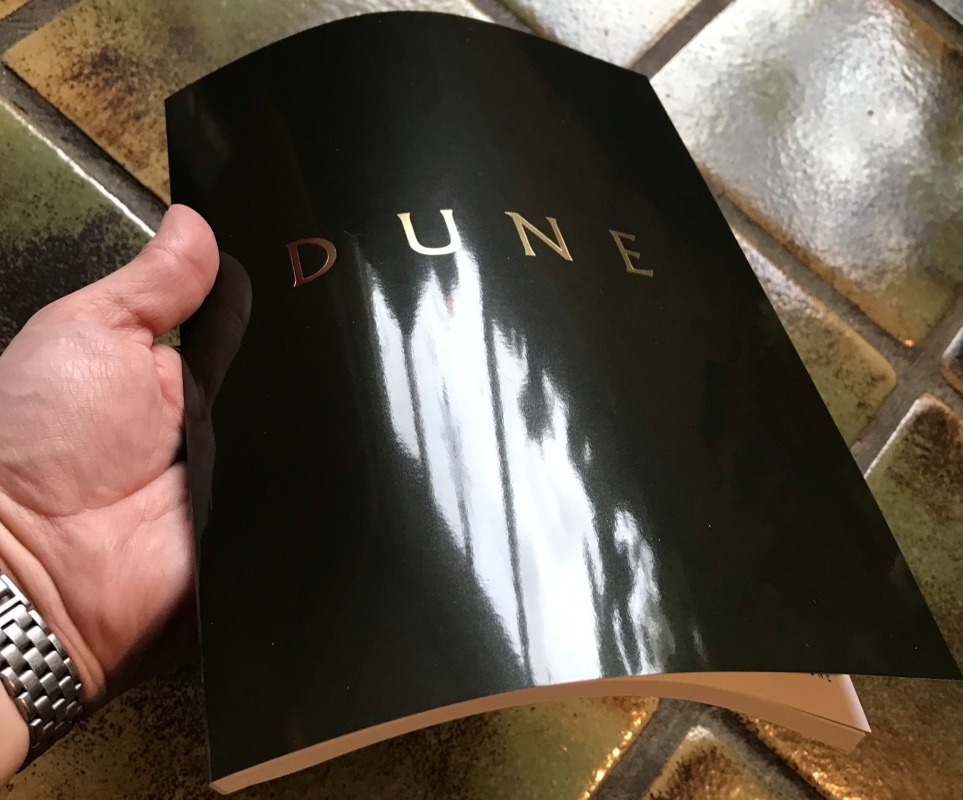 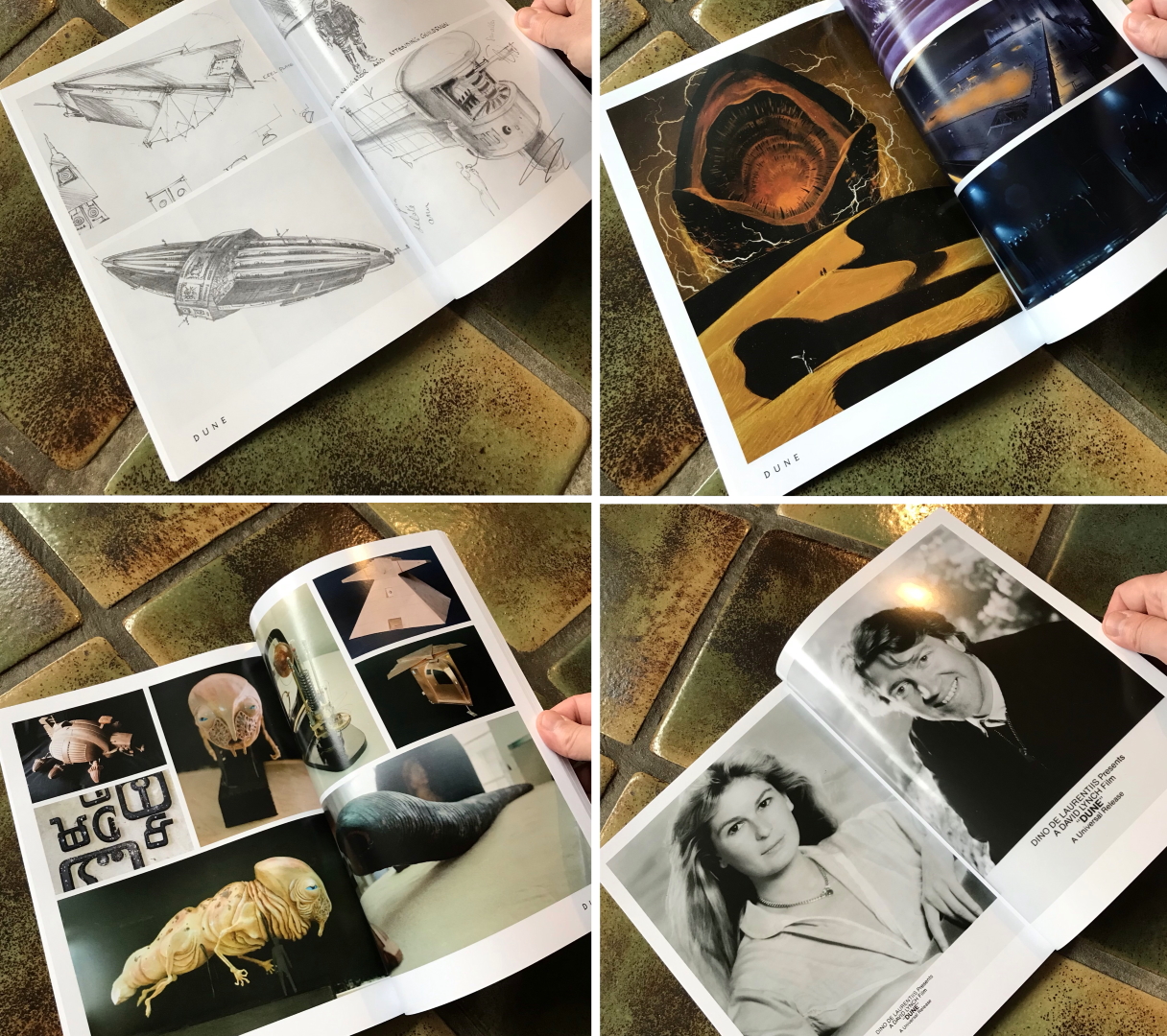 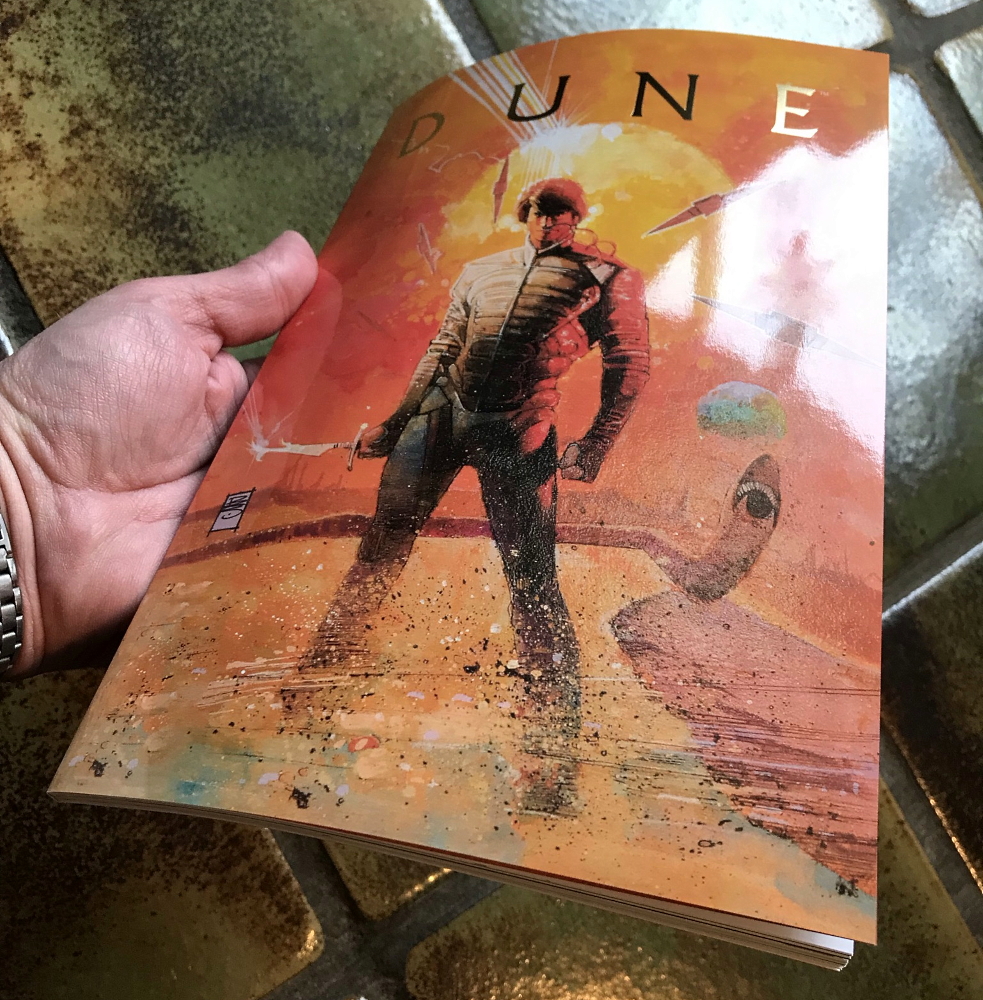 An 80-page version of the graphic novelization of the film, by Ralph Macchio and Bill Sienkiewicz. 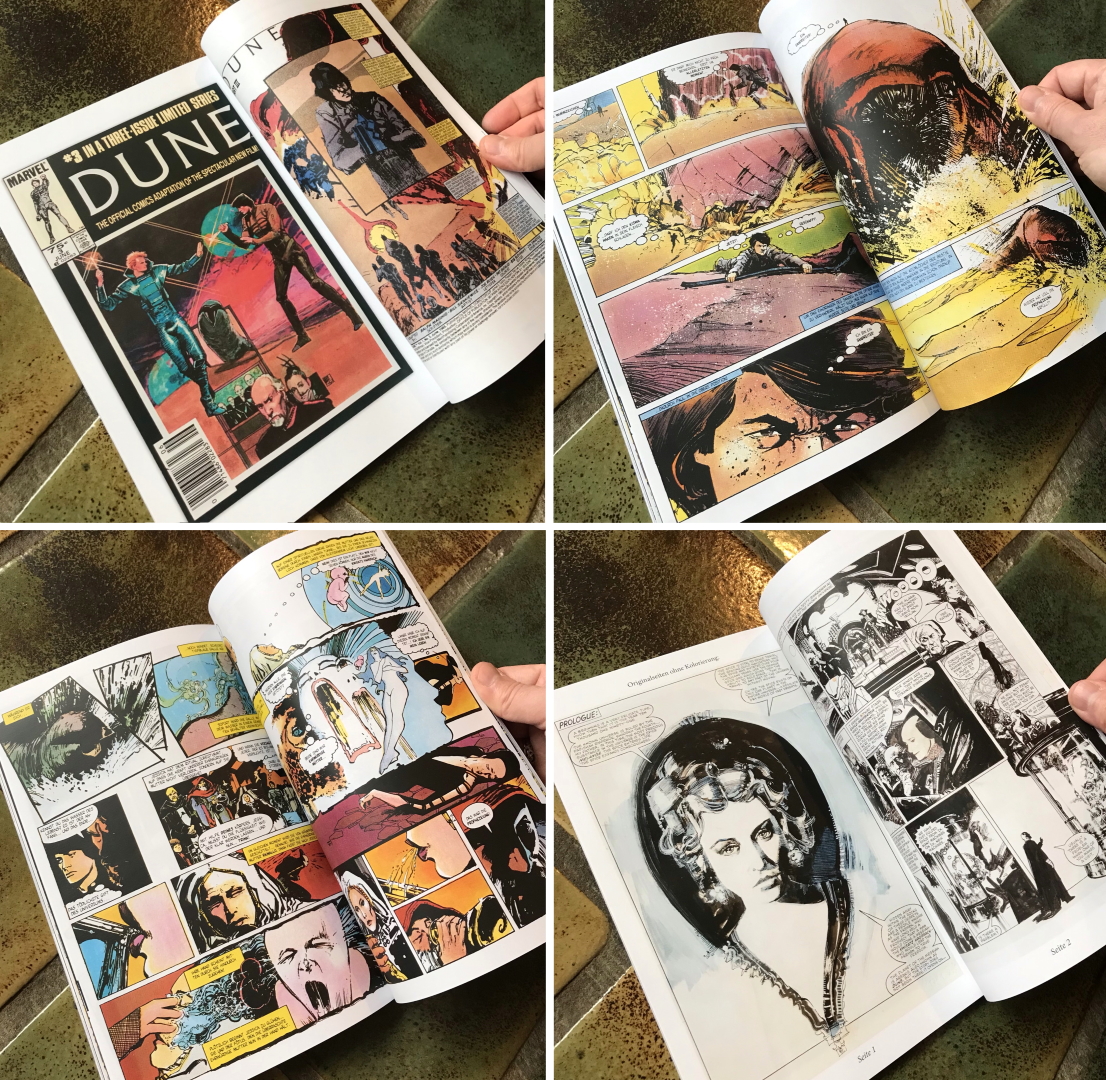 Inside you get the three comic books Marvel released back in 1984 (in German), but also some extra art and sketches, including a peek on how the colourization was done back then. 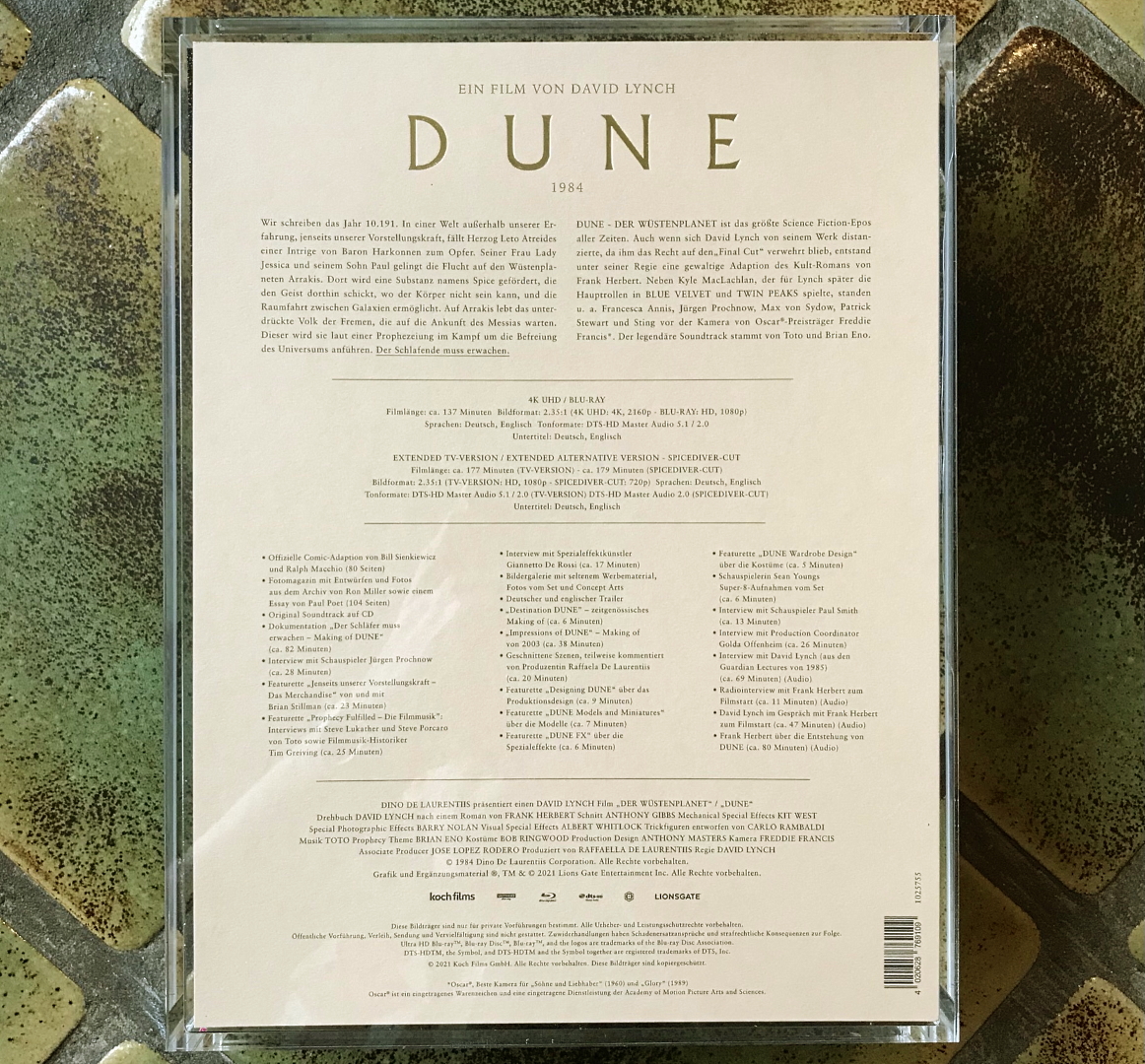 What a magnificent set. As a fan both of the film and the book I couldn't be happier. If this doesn't win my 'best release' award this year, I can't wait to see what will have topped this.