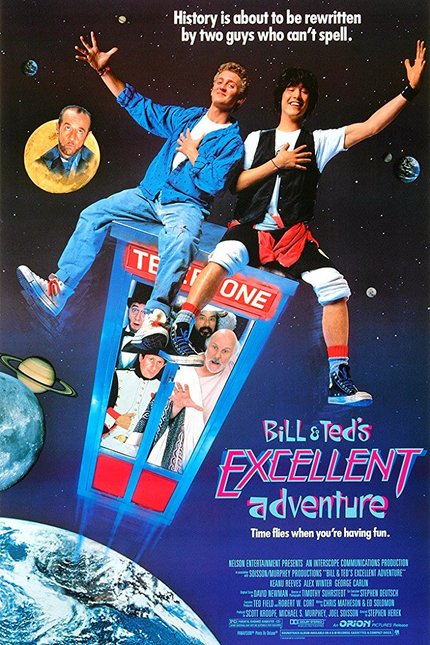 Sure, this lovable pair of righteous slackers somehow go on from no-talent anonymity to unifying global musical greatness, but who could’ve foreseen that their simplistic all-good/all-bad worldview would also travel forward? In our contemporary world of polarizing extremes on matters of politics, religion and even music, opinions so often come down to either total approval, or outright rejection. Love it, or hate it. Thumbs up, or thumbs down. Excellent, or bogus.

The latter, of course, are the preferred responses of Bill and Ted, circa 1988. This simpleton duo, played with perfect chemistry by then-unknowns Alex Winter (The Lost Boys) and Keanu Reeves (The Matrix), may’ve spent a lot of time in the past, but when it comes to processing the dynamics of life, they forged the curve.

But hey! Bill & Ted never meant any harm. Au contraire - these scruffy guitar-playing goofs, George Carlin’s expository dude Rufus informs us, eventually bring forth a glimmering new world of peace and awesomeness. Most excellent, indeed! But, in order for that to come true, the guys must pass their high school history exam. If not, Ted’s hard-case father is shipping him off to military school in Alaska, terminating their band, Wyld Stallyons, and more importantly, their undeniably dynamic bond. 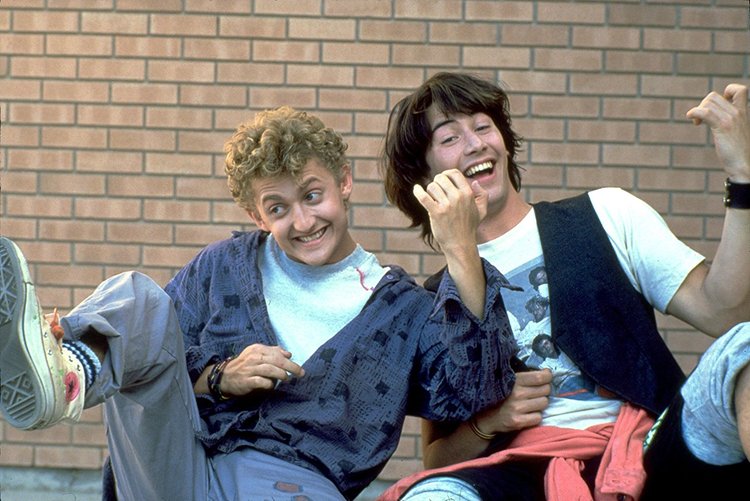 Boasting big hearts and the functional IQs of Labrador retrievers, Bill and Ted have got their friendship, and not much else. Coming from broken families in the blah-nothing town of San Dimas, California, their bright idea of recruiting Eddie Van Halen to salvage their band, Wyld Stallyons, is their only hope. It’s a plan that’s only slightly more far flung than the one that the awesome future, courtesy of Rufus and his time traveling phone booth, has in store for them. Only a mind-blowing history class presentation can save their band, their friendship, and the future. Zipping through time to pluck Billy the Kid, Abraham Lincoln, Joan of Arc, Genghis Khan, Sigmund Freud, Beethoven and Socrates (pronounced here phonetically) as guest presenters ought to do the trick.

The budget is low, the energy is high, and the infectiousness of it all is impossible to deny. Despite what some may assume to be “stoner comedy”, Bill & Ted’s is nothing of the sort. The hand-spun seat-of-the-pants outsider charm of it all is key to its nonsensical big heartedness. But more than that, after all these years, it’s clear that this little-movie-that-could succeeds on a level akin to A Hard Day’s Night or even the Marx Brothers.

Bill & Ted’s Excellent Adventure may not be Lofty Cinema in the high falutin' sense, but any quest to locate a hater of the film would likely be one for the ages, and prove most heinous. Undeniably, as directed by Stephen Herek and scripted by Chris Matheson and Ed Solomon, it’s a smart movie about dumb guys; smart enough, anyhow, to understand, embrace and just play around with the inherent preposterousness of time travel.

Let’s be clear, Bill and Ted are in no way to blame for today’s culture of divisive extremism. If anything, we’ve taken all the wrong lessons from the Great Ones; their promised future of “be excellent to each other” remaining, for now, a distant vision. Which is why we need them now. Digging into this unlikeliest of zeitgeist hits is nothing less than a certain balm to the soul, whatever the year. In the annals of time travel movies and buddy comedies, Bill & Ted’s is history.

Thanks and acknowledgment to Jake Hughes for the phrase “a big heart and the functional IQ of a Labrador retriever,” which was too perfect not to include.

Do you feel this content is inappropriate or infringes upon your rights? Click here to report it, or see our DMCA policy.
Alex WinterBill and Ted's Excellent AdventureGeorge CarlinKeanu Reevestime travel