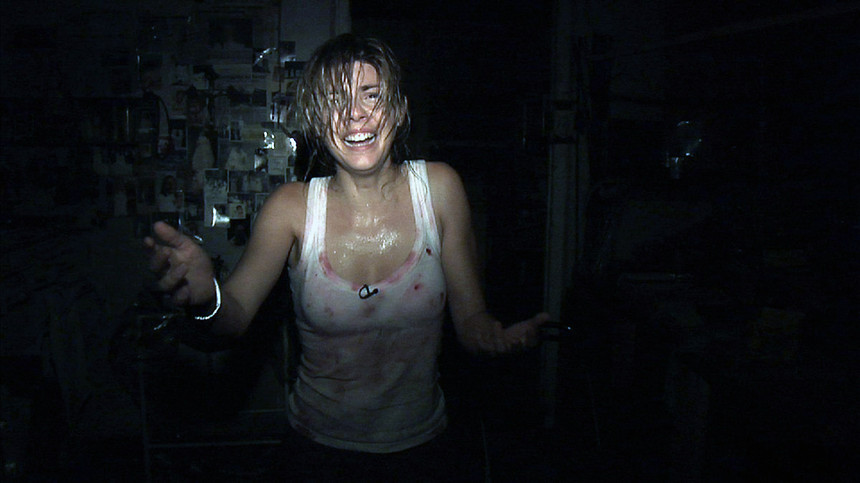 The excitement surrounding Jaume Balagueró and Paco Plaza's 2007 found footage film, [REC], is hard to explain to anyone who wasn't tracking horror movies 10 years ago. There was a palpable groundswell of anticipation among genre fans here on domestic soil, a sense that I don't think it's an exaggeration to say has not been matched for a foreign horror film since.

To understand the legacy and impact of [REC], we'll first need to take a trip back to 2007, a time when, believe it or not, found footage was not very popular in the mainstream.

It might be hard to believe, but found footage, a sub-genre that is now ubiquitous in horror, was, by 2007, completely DOA. Following the popularity of The Blair Witch Project you'd think a glut of found footage films were released widely, but the truth is there were only a handful released in the early 2000's, none of which penetrated the mainstream market.

In fact, when asked about his inspiration to implement the found footage technique for [REC] in 2015, Jaume Balagueró stated it was actually reality TV that turned him and Plaza on to the notion and not previous films (though he does pay lip-service to The Blair Witch Project as well as Kit Wong's totally obscure The Black Door).

And in retrospect, there's no doubt that 2007 was ground zero for the found footage renaissance due to the double shot of [REC] and Paranormal Activity, two buzzy films that, in their diverse approaches, showed the possibility of using the technique to powerful creative effect while also maximizing profit. From there the sub-genre blew up.

The zombie genre as well was slowly rising from the dead and, looking back, the path to audiences embracing [REC] is clearly laid: Danny Boyle's 28 Days Later premieres in 2002, Max Brooks' Zombie Survival Guide publishes in 2003, Zach Snyder's Dawn of the Dead remake hits in 2004, followed by George Romero's return to the genre with Land of the Dead in 2005...

Year after year in the early aughts, zombies were slowly shambling their way into the public forefront, so by 2007 the landscape was primed for a film like [REC], one that implemented a novel technique and was visceral and serious, to be met with enthusiasm by fans and critics alike.

Revisiting the film ten years later, I'm still impressed at how [REC] delivers on the promise of a frenetic and terrifying first person experience that puts you in the center of a truly harrowing story.

I've never been a stickler for how found footage films justify the presence of the single camera operator, but I do appreciate that [REC] does an admirable job of building its story around a news crew in order to justify why the footage we're watching was shot. This bit of verisimilitude not only helps to set up the film's aesthetic, but it's a fun way to introduce us to our protagonist, the lovely young reporter Ãngela Vidal (played amazingly by Manuela Velasco), who finds herself thrust into a horrible situation just for being part of a goofy ride-along with a fire crew.

At the time, Jaume Balagueró and Paco Plaza where not so much interested in the economics of found footage, but rather believed strongly that realism was the most important ingredient in horror, and so built [REC] accordingly. Velasco's authenticity as Vidal is a key ingredient, but her realistic performance is also due to what the directors put her and her co-stars through during filming.

Since they knew true terror would translate best on film, Balagueró and Plaza use a number of techniques to generate true fear in the actors, including improvisation to keep them on their toes. For one, they shot in very long sequences, sometimes twenty minutes in length, in order to disorient the actors and keep them drained. When watching the film, we are quite literally seeing the film's actors endure a haunted house experience for much of the film, which gives [REC] a layer of realism lacking from many other films of the genre.

For further proof of how important this kind of realism is, look no further than the franchise's third and fourth parts which eschewed the found footage technique for a traditional one. While those films are both a blast, they just don't match the first two films in intensity and menace.

Speaking of sequels, [REC] was so popular upon release that the franchise spawned three sequels and the American remake, Quarantine. Again, that puts it almost neck and neck with Paranormal Activity which also came out the same year, showing both these films tapped into something that resonated with viewers at the time.

Without getting into spoilers, it would be a mistake to discuss [REC] without addressing the film's shocking finale, which would go on to influence many horror filmmakers to come. Drenched in the sickly green glow of night-vision, reporter Ãngela Vidal finds herself in the top floor apartment which appears to be the source of the building's outbreak. As she explores, she hears a sound and we realize she's not alone. What follows is as harrowing and tense a final moment of a horror movie can produce, the icing on the cake its final shot of Vidal being dragged out of frame. What happend to her? The mind reels as you leave the film.

Point is, [REC] remains one of the best examples of found footage firing on all cylinders. At its best it throws out the usual bric a brac of "story", charater development, theme, even credits (!), in favour of immersion into the chaos of the moment.

Put simply, it's pure cinema, and I hope it retains the credit it deserves for playing a part in bringing on the found footage reneaissance that followed.