L'Etrange 2019: Celebrating Rosto With RERUNS, Plus So Much More 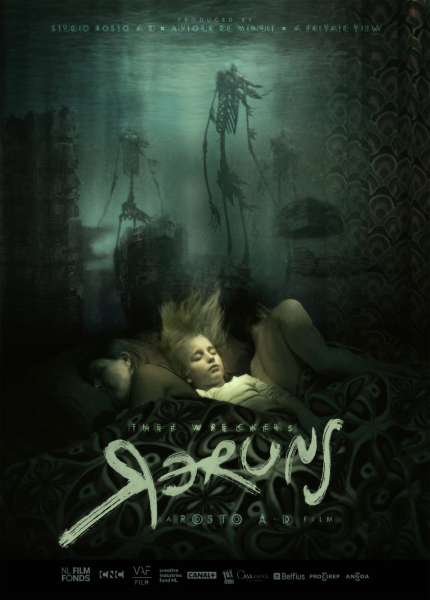 The 25th edition of the L'Etrange Festival kicked off in France by remembering filmmaker Rosto.

It is a dark and story night, but that doesn't explain why an elongated head is floating downward beneath the waves, or why a young girl is sleeping between her parents in their cozy bed, which is also located underwater

Strange, mystifying, and mostly underwater, Reruns is an experimental film that feels oddly liberating. The young girl recalls home-movie memories in her dreams, and then grows old before our eyes, and then is transformed into someone who is floating through a submerged high school.

It all feels dreamy and unreal, and is pleasantly surreal, even if it's almost recognizable, even as logic and sense gently move away into a quietly ethereal, wonderful memory patch that is welcoming and benign. It's musical, too. The conclusion makes great use of song by his band Three Wreckers that feels melancholy and sweet, especially in view of Rosto's untimely passing this past March.

The festival is jam-packed with titles that straddle the lines between reality and fantasy, opening with Kiah Roache-Turner's Nektronic -- accompanied by Reruns -- and the first day also saw the likes of Tumbbad, Bruce McDonald's Dreamland, Joe Begos' Bliss, Lee Min-jae's The Odd Family: Zombie on Sale and Lorcan Finnegan's Vivarium, among others.

And that was just the first day! Though I have never been in a position to attend the festival in person, the lineup presents many delights for fans of somewhat older films as well as the latest genre fest attractions. Tonight, for example, Peter Weir's director's cut of Picnic at Hanging Rock will be followed by Suzuki Seijun's Branded to Kill, which is followed by Werner Herzog's latest, Family Romance, which is followed by Laurent Courau's "trans-media project," The Occult Sources, with the director present.

Truly, it's an embarrassment of riches, and I've only skimmed the surface of what has been playing at the festival for the past few days. Upcoming, we'll have a look at two or three of the films, individually, including the trippy sci-fi flick Blood Machines, which we have highly-touted in these pages and will be world premiering this coming Saturday. (Spoiler: If you're attending the festival, make sure to see Blood Machines.)

More about The Odd Family: Zombie On Sale