Venice 2018 Review: TUMBBAD Is A Complex Story Of Avarice And Fear 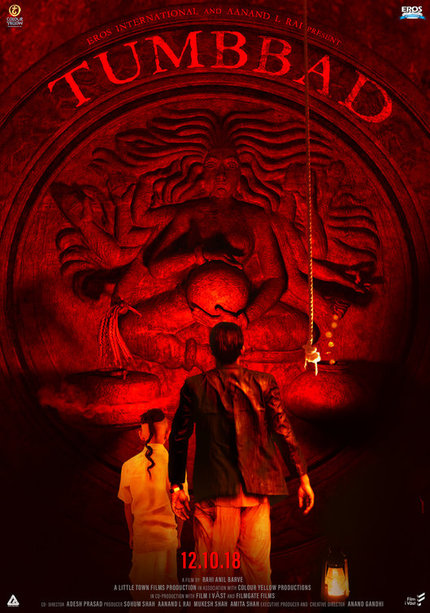 Something sinister lurks in the bowels of an ancient colonial estate in the rural Indian village of Tumbbad. A vengeful god protects an endless fortune that has existed since the beginning of time. Vinayak Rao's family have looked over the estate and its keepers for years, but when the heirs finally pass away and it's his turn to take possession of his birthright, the temptation to trick the beast and gain the fortune sends him hurtling down a path of greed from which there is no escape. Resistance is futile, and the pattern set by his rapacious ancestors lives on through him as the quest to defeat the monster becomes an all-consuming obsession.

Co-directors Rahi Anil Barve and Adesh Prasad bring to the screen an horror film that draws heavily not only on India's colonial history, but also its rich tradition of horror to create a story that starts a new chapter for horror from the region. An eight year passion project of producer/star Sohum Shah, Tumbbad has been crafted by the hands of some great talents, including Ship of Theseus director Anand Gandhi, but in the end it is Shah who stuck with it, and thanks for super-producer Anand L. Rai, the film has finally reached screens at Venice Critics Week among a number of other scheduled festival stops before it's opening in India this October.

Much of what the world knows about Indian horror is based upon the b-grade epics made by the infamous Ramsay brothers in the '70s, 80s, and '90s. These films were characterized by extensive use of crumbling colonial estates, ancient curses, and sex-starved monsters. In Tumbbad, the point of departure is largely the same. We are still based in crumbling colonial estates, at the mercy of an ancient curse, the most significant thematic deviation is the substitution of greed for money over sex or love, but the bones are all still there. What Tumbbad does is use these as the cornerstone for a new brand of horror in India, something akin to what is currently thought of as elevated horror in the west.

Tumbbad is not just a story about a monster chasing down nubile wenches, or men desperately trying to escape from a haunted mansion. Instead, the unique thing about the film is how it reverses the monster's role. Rather than chasing his victims, they are drawn toward the danger with the promise of endless wealth for their trouble. It creates a fascinating dynamic, and presents complex protagonists, like Vinayak, who aren't outwardly heroic, and are rather incredibly flawed and weak.

The way the filmmakers have managed to balance this unique and complex concept with a very obvious reverence for Hindi horrors campy roots is wonderful. The film opens with a brief prologue that lays out some of the mythology behind the story of Tumbbad, but it doesn't go so far as to give away anything juicy. If anything, the film allows the viewer to discover more and more layers as it goes along with the prologue as a guide. Tumbbad doesn't shy away from the good stuff, though, there are several good, old-fashioned latex gross outs to go along with the more serious stuff, which makes the old gorehound in me happy.

Tumbbad's extended production history means that a huge number of technicians are responsible for the final product, but it still manages to retain a certain aesthetic cohesiveness that will please viewers across teh board. The cinematography by Pankaj Kumar pays effective tribute to the film's rural settings by giving the audience wonderful sweeping views of the Indian countryside while also managing to capture the moments of claustrophobic violence and terror incredibly effectively. Video game composer, Jesper Kyd's score switches back and forth between the expected strings of an Indian drama and ominous synths that help the audience change gears when the film moves from dramatic moments to horrific ones.

This story of a greed that stretches of eons and the way that it transforms and destroys the family burdened with it is a wonderfully fresh take on horror from a region whose cinematic history with the genre is checkered at best. Tumbbad features great performances from all of its relatively unknown leads, as well as solid technical chops that should help it break out of the South Asian film ghetto that so many films from India fall into after their festival debuts. A slow burn whose finale is wonderfully unexpected and yet fitting, Tumbbad is a great film and hopefully the start of a new trend in India.