Notes on Streaming: THEY COME KNOCKING, Quiet and Insistent 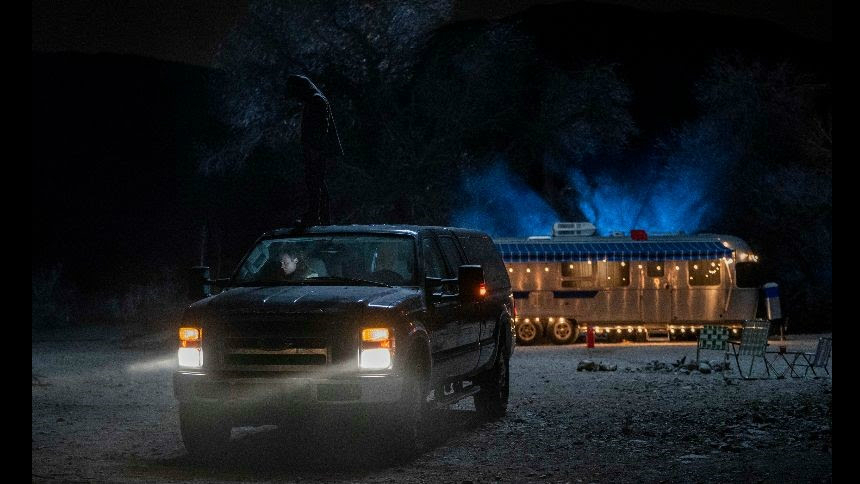 In the latest episode of Blumhouse Television's Into the Dark series of films, a splintered family comes under attack.

Like all anthologies, Into the Dark has a mixed record of success, which reflects both the challenge of the anthology format, as well as the pattern established by Blumhouse Productions and Blumhouse Television. The former is almost inherently uneven, while the latter may be the result of the reported freedom given to filmmakers.

Nacho Vigalondo's Pooka! and Sophia Takal's New Year, New You have been the highlights for me, though I very much enjoyed the first half of Daniel Stamm's Down and nearly the entirety of Chelsea Stardust's All That We Destroy.

Admittedly, the profane black comedy in Adam Mason's I'm Just F*cking With You did not grab me, but Mason's They Come Knocking, written by Shane Van Dyke & Carey Van Dyke, drives straight down my lane of quiet horror greatness.

Firmly grounded in the desert-horror sub-genre, stretching from The Hills Have Eyes (1977) all the way through to Southbound (2015) and a number of others, They Come Knocking follows a nuclear family that has been torn apart by death. Father (Clayne Crawford) travels with his two daughters, teenage Josephine Langford and youngster Lia McHugh, into the desert to commemorate their recently deceased mother. After they've set up camp, they become aware of disturbing things coming out of the desert and must figure out how to survive.

What really won me out was the pacing and mood established by Mason. Our own Todd Brown wrote years ago about Mason's "remarkable ability to manipulate tension" and that talent has remained strong in his succeeding films, and in They Come Knocking as well. It's not that the story is all-new, but the charged atmosphere created by the filmmaker allows its most potent points to be made clearly and with an empathetic degree of poignance.

Summing up: Memories, tension and creatures in the desert are locked in a compelling battle for the soul of a family.