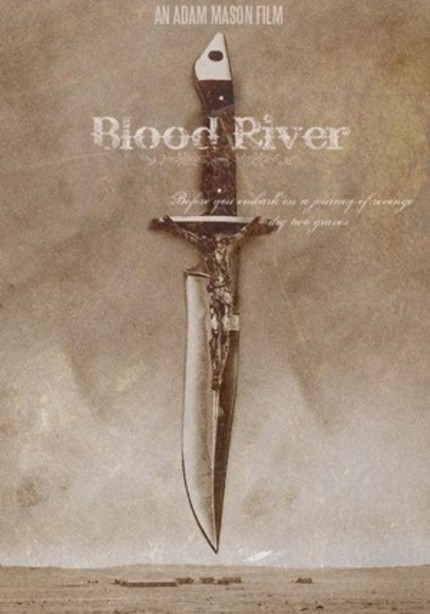 [Adam Mason's Blood River has walked a difficult path from production to release and so, with the film now screening at the Sitges Film Festival, I re-present now the review I wrote for the picture roughly two and a half years ago when it was wrapping up post production.]

Over the past few years we have kept close tabs on British director Adam Mason in these pages, drawn in first by his remarkable ability to manipulate tension and accomplish rather a lot on very tiny budgets, and then further impressed by the remarkable steps forward Mason has been taking from film to film. And fresh off of an appearance by his feature The Devil's Chair in the Midnight Madness program at the Toronto Film Festival that constant striving forward continues with his latest effort, the genre defying Blood River. By far Mason's most cinematic film to date it is also his more personal work and features the most thematically complex script from Mason and writing partner Simon Boyes to date. A simmering study of Old Testament style sin and retribution, Blood River plays like a slow burning Faulkner by way of Deliverance. We begin with Clark and Summer - young, attractive, still freshly married and driving through the Nevada desert to tell her parents of Summer's pregnancy. The pair pass a lone figure walking along the side of the road and debate picking him up and eventually opt against it, unaware of what an impact this one man would soon have on their lives. His name is Joseph - a powerful performance from Andrew Howard who also starred in Mason's The Devil's Chair - a hard drinking, chain smoking drifter with a major religious fixation and the deeply held conviction that he is a messenger from God, called to judge people for their sins. And everybody has sins. Everybody is in need of judgment. Everything is going well for Clark and Summer until a blowout leaves them stranded in the middle of nowhere. Clark is bloodied by the resulting crash, Summer fears the effect the impact may have had on her unborn child. They have no water. They have no spare. Their car is bogged down in sand and the roadside motel they spent the previous night at is fifty miles back. Their only hope is to continue forward on foot and hopefully find help at the small town labeled on their map as Blood River. But when they arrived, tired and dehydrated, they discover that Blood River is dead, a ghost town. There is no help to be found there. They are completely on their own with no resources whatsoever until, once again, they see a lone figure approaching on the road. It is Joseph. He explains that his truck has run out of gas and suggests the camp for the night where they are before returning to Clark and Summer's car on foot to siphon off the gas for use in his truck which they can then drive for help. They see no other option, and Joseph has both food and water in his pack, and so they agree. But Joseph has no real desire to find help ... Although screened as a work in progress at an invitation only screening at the European Film Market, in a version without color grading, ADR or any significant post production work done on it whatsoever, Blood River is an immediately striking visual piece of work. Shot on location in the desert outside of LA the film makes great use of the desolate landscapes and lonely imagery. It is a beautifully shot piece of work, one that makes use of aerial and crane shots to fully exploit the vast expanse of its desolate setting before moving into the deserted town and gradually developing into an uncomfortably claustrophobic indoor affair. A difficult work to categorize, Blood River is very clearly recognizable as Mason's but it is Mason exploring some very new ground. While there are a pair of striking gore shots in the film and there is certainly a good deal of violence, that vilence occurs on a more mental and emotional level than on the physical. While it will appeal largely to horror fans I don't think it can really be considered a horror film per se, though it's not really a thriller, either. Whatever you want to classify it as it seems quite clear that this is the most personally invested Mason has ever been with his material, it seems clear he really means what he's saying here and he has some truly troubling things to say about the nature of evil, the nature of sin, and the consequences that it carries. Blood River is a more difficult film than Mason's earlier works, it asks more of its audience and, as a consequence, it will probably require a little more time to find that audience. The very things that make it difficult, however, will also very likely prove to make it lasting. Blood River is no disposable piece of entertainment, it is a film with some substance to it, one that will stick in the minds of its viewers.
Sign-In to Vote
Tweet Post Submit

Check the trailer here Read my interview with Mason here

ORIGIN OF THE SPECIES Exclusive Clip: Robots go to War