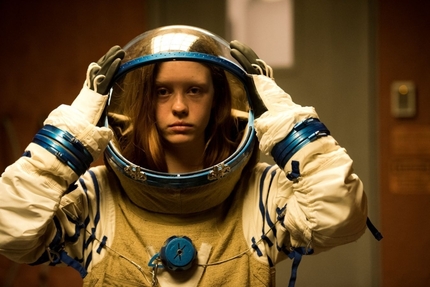 Western Canada's largest genre festival celebrates its sweet sixteen this year. The Calgary Underground Film Festival (CUFF) dropped its line-up today, and as with previous years it is a delightfully eclectic mix of the both serious and silly cinema.

Documentaries range from a profile on Canada's sweetest little old lady sex therapist, Dr. Ruth, to Penny Lane's deep dive into the Church of Satan in Hail Satan?  And Fuck You All: The Uwe Boll Story sees director Sean Patrick Shaul give the confrontational German trash-meister the spotlight for 96 minutes.

Peter Strickland's esoteric (and deeply funny) ode to the heyday of British department stores, also happens to be about a killer dress, In Fabric plays alongside Claire Denis' disturbing and tender tale of space-parenting, High Life.

Returning to the festival is THE SATURDAY MORNING ALL-YOU-CAN-EAT-CEREAL CARTOON PARTY! The most popular event of the festival, takes place on Saturday, April 27 at 10 am. As always, the 3-hour trip of retro cartoons, curated by Kier-La Janisse, will be accompanied by an all-you-can eat buffet of cereal, including gems so sugary that they cannot be purchased in Canada.

Just ahead of the festival is National Canadian Film Day on Wednesday, April 17, where CUFF will be hosting a free screening of the Canadian cult classic Happy Birthday To Me on 16mm with cast member Lisa Langlois in attendance.