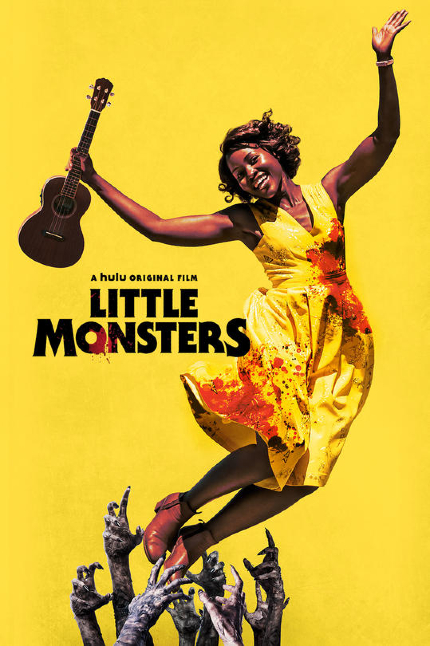 O my little ones, don't worry, it's just a game of splatter.

Back in 2016, my Canadian friend and editor Todd Brown fairly well insisted that I see Down Under when it screened at Fantastic Fest in Austin, Texas. Our tastes do not always cross over on comedy, but in this case, I was immediately sucked into the dry humor that all the characters exuded, thanks to the script and direction by Abe Forsyth. The film dissected the wild absurdity and gravely serious components of racism, all in an end-of-the-world comedy that flew by. (My review here.)

So it should be no surprise that his followup, Little Monsters, is just as absurd, just as funny, and even more explicitly violent. Once again, Forsyth takes aim at targets that are both broadly obvious and intimately personal, starting with Dave (Alexander England), a struggling musician who is constantly arguing with his longtime girlfriend.

Layabout Dave comes to a crossroads and ends up sleeping on his long-suffering sister's couch, where he reacquaints himself with his 5-year-old nephew, Felix (Diesel La Torraca). Taking the boy to school one day, Dave is smitten with Felix's beguiling school teacher, Miss Caroline (Lupita Nyong'o), and happily volunteers to accompany the class to a recreation area the following day, where they encounter a zombie outbreak from the adjacent U.S. military base.

As established by the first few minutes, Little Monsters is a brash, witty, and possibly offensive comedy, but as internal organs get ripped out and blood is splashed liberally about, the sheer absurdity begins to rule. To keep the children calm, Miss Caroline tells them they are playing a game, and the kids love her so much (and are so genuinely young children) that they accept what she says and play along too.

The true bad taste in the film emanates from Teddy McGiggle (Josh Gad), a children's TV star who has picked the worst day possible to visit the park. The bitter and very unpleasant Teddy spits out profanities and vitriol against the children, especially, but also the world in general. The character becomes much more of a villain than any of the zombies, and one can't help but wish for his early demise, especially since Gad plays him far too broadly for much comic mileage.

On the plus side, Nyong'o makes for a very appealing comic heroine as the brave teacher who puts aside her own fears and apprehensions for the sake of the children. England also makes for a good protagonist as his bumbling, selfish inclinations are gradually melted away to reveal a far more good-natured, self-effacing personality than upon initial impressions.

Do you feel this content is inappropriate or infringes upon your rights? Click here to report it, or see our DMCA policy.
Abe ForsythAlexander EnglandHuluJosh GadLupita Nyong'o