Rotterdam 2014: What The Audience Liked Best

Last week saw the end of the 2014 edition of the International Film Festival Rotterdam. Prizes were awarded, parties given... and the final audience ratings were added to the tally.

The IFFR audience ratings are always something to look forward to. Available from the third day of the festival onward, and updated daily, they often provide some priceless pointers towards choosing what to go see during the last few days of the festival. So many titles at the IFFR are made by unknown artists, or are World Premieres, that it is always impossible to predict the entire top five. Surprises happen every year, and for me the audience ratings list is a definite must-see, so I can maybe add another film or two to my viewing roster.

This is how ratings work: for all public screenings, audience members are given cards with the numbers one (bad) to five (very good) on them. When leaving the venue, all you need to do is pull a small tear in the card at the rating you want to give. These cards are collected at the exit, counted, and the average ratings appear in the festival's newspaper, The Daily Tiger, and the IFFR website.

So here are, without further ado and from back-to-front, the top 20 films as chosen by the thousands of people comprising the IFFR 2014 audience. Have a browse, and maybe this list can be of help to you with upcoming festivals. As you can see there is a lot of diversity in there: fiction and documentaries, color and monochrome, and the titles are from all over the globe. 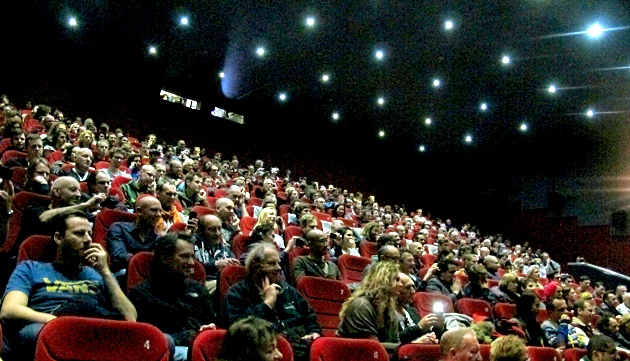 A typical IFFR audience, eagerly awaiting something they may be voting for.

Any film ending up with a rating of 4 (out of 5) can be safely seen as a crowdpleaser. There will always be people who hate a film and give it a "1", so you can imagine how many "5" voters you need to pull the average to the level of 4. For the same reason, getting an average of 4.5 or higher is pretty amazing, when you think about it.

Of course there is always the question WHY a certain film is a crowdpleaser. Introductions by, for example, funny directors or gorgeous actresses help get ratings up. Any film taking place in Rotterdam itself can also count on a warm reception, as the entire cast, crew, friends, family and neighborhood will in all probability be inside the venue.

So with that in mind, peruse these twenty with the guarded spirit of an analyst, but also with the open mind of a movie lover! 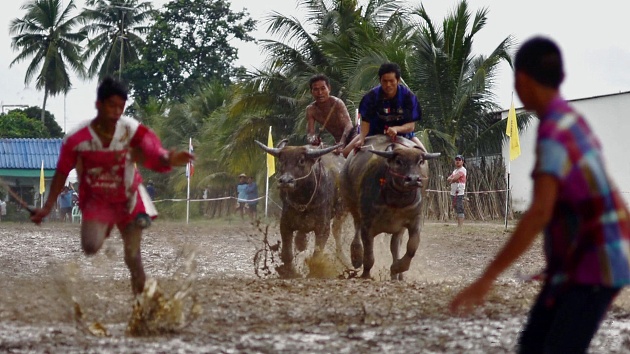 Although filmed as a scripted narrative, according to its director Uruphong Raksasad it is more accurate to call it a documentary about rice, and the communities involved in producing rice.

In its 75 minutes, this Thai film shows the festivities, music and prayers surrounding the whole traditional planting, tending and harvesting of rice. It was a World Premiere at this year's IFFR and a surprise hit with the audiences.

This is a sarcastic ensemble comedy about current German suburbia, where life seems to be absolutely fabulous until you start scratching a bit deeper and the rot starts to show beneath the veneer. 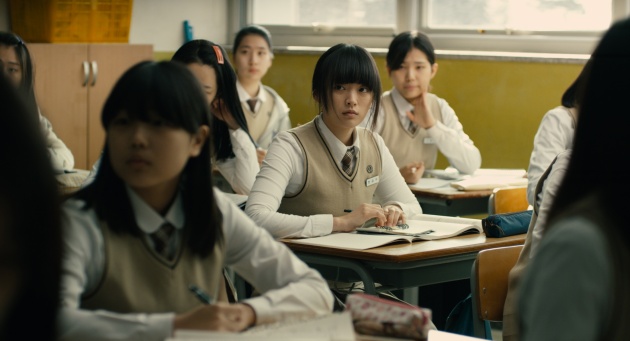 A strong Korean drama about high-school girl Han Gong-ju, who has been transferred after something bad has happened. What it was and how it impacts people turn out to be pretty shocking. Pierce Conran saw it earlier last year and was devastated, as you can read in his review.

On top of that, it was in competition for one of the three Hivos Tiger Awards, and won it! 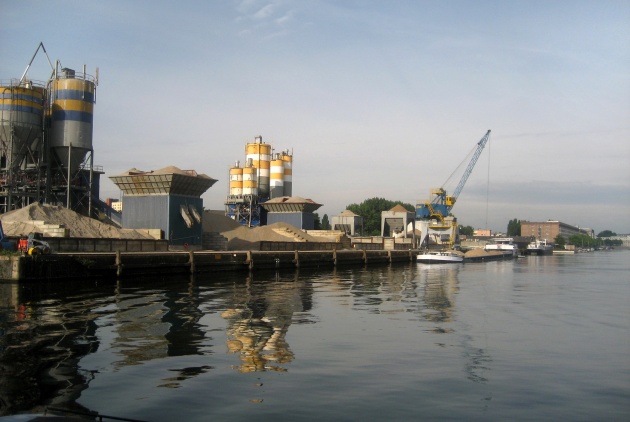 Experimental cinema often carries the stamp of being unwatchable, but in this case that certainly is not true. The film shows the impact a disappearing person has on his surroundings, based on the messages which are received by his answering machine. The end result is touching and surprisingly poignant. This was a World Premiere at the IFFR, and you can read my review here. 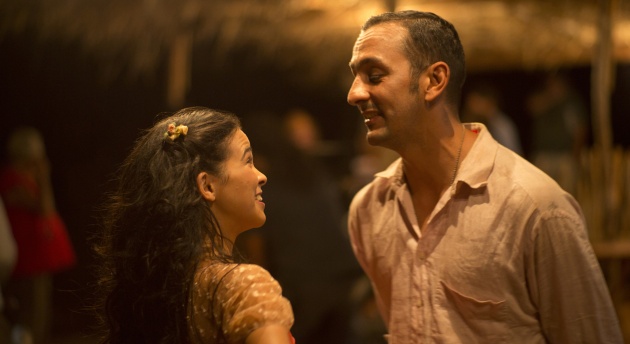 The first full-length feature by acclaimed shorts director Camilo Cavalcante, this film tells the stories of three women, one young, one mature and one old, in a small scorching hot Brazilian town. Yet another World Premiere at the IFFR, people have been hailing its music, its cinematography, and its warm fairy-tale-like atmosphere. 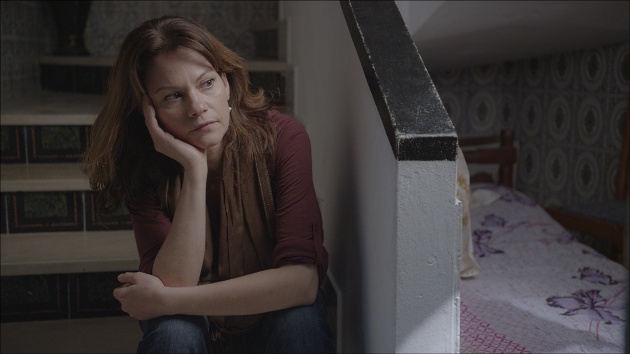 A Syrian immigrant of Canada returns to his birthplace, the island Arwad, and drowns during a midnight swim. Was it an accident or suicide? His wife in Canada and his mistress on Arwad need to figure this out by themselves.

This was also a Hivos Tiger Award nominee, and this one won as well! 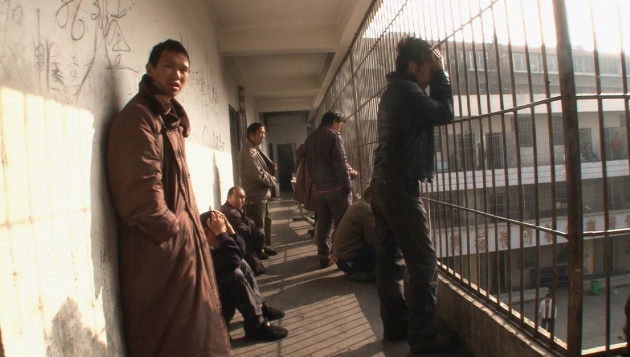 Director Wang Bing is known for making ultra-long documentaries, like his famous West of the Tracks. This time he kept things somewhat shorter at a "mere" four hours, but the end result is again stunning. For months, Wang Bing lived in a municipal asylum together with the inmates, and this allowed him to film their daily lives from within. 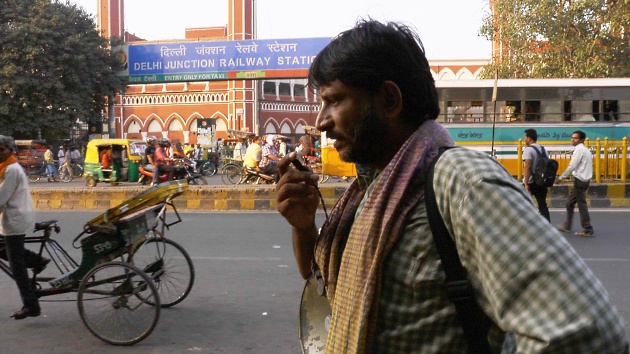 This stunning film shows the plight of a poor and illiterate father trying to locate his son, the boy having disappeared one day after leaving the factory he worked in. Todd Brown called it a "beautifully tragic portrait of India" in his review. 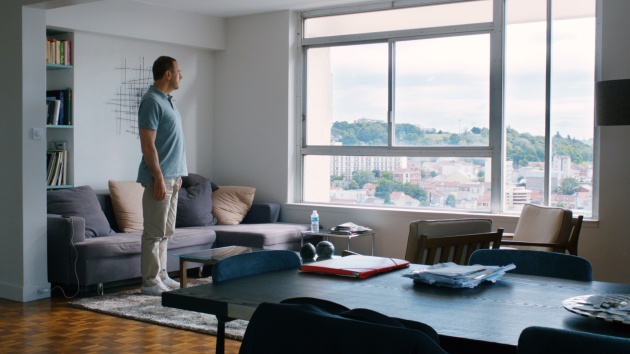 A rich Parisian approaches a poor eastern European immigrant for a one-night-stand, but when he opens the door for his new "lover" a whole gang comes in. Tension ramps up and power shifts, as the question rises who exactly is exploiting who. 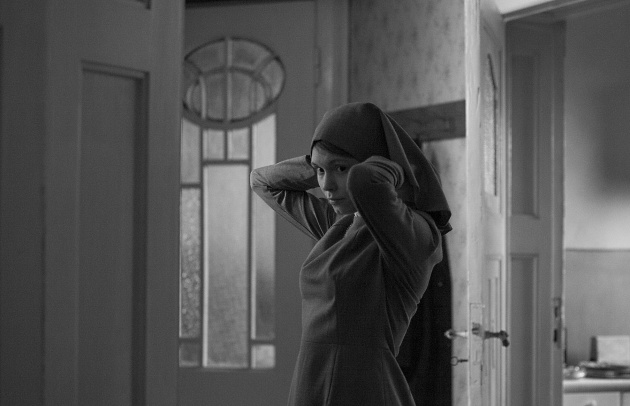 A young devout nun goes on a journey with a sarcastic older family member, and encounters devastation and temptation in the world outside of the convent. This concept has been done before, but seldom this beautiful, according to Patryk Czekaj in his review. 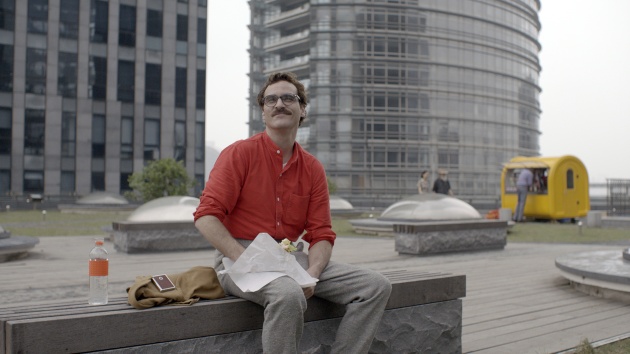 You may have heard about this one. If not, please go read Dustin Chang's review! 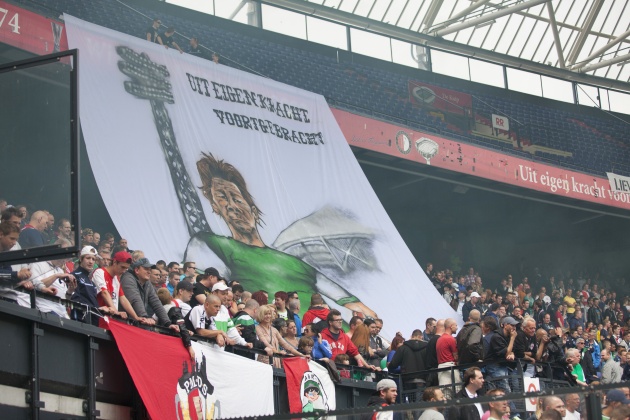 Remember I said local content is popular at the IFFR, if done sufficiently well? This documentary is about the fandom in Rotterdam for its mega-soccer club Feyenoord. Not the hooliganism, but the love through the ages takes center stage here, and it struck major chords at this festival, obviously the right place for its World Premiere. 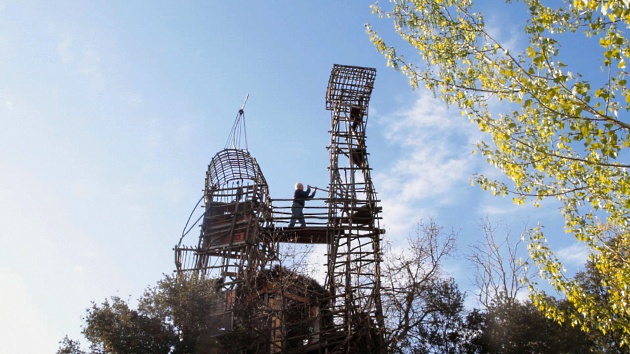 Another documentary and another World Premiere, this one shows Garrell: an eccentric Spanish guy who played in the forest as a child and continued to do so as an adult, with stupefyingly spectacular results. You see Garrell build, extend and destroy huge structures, towers well over 30 meters tall, dams, giant labyrinths, entire cave systems. 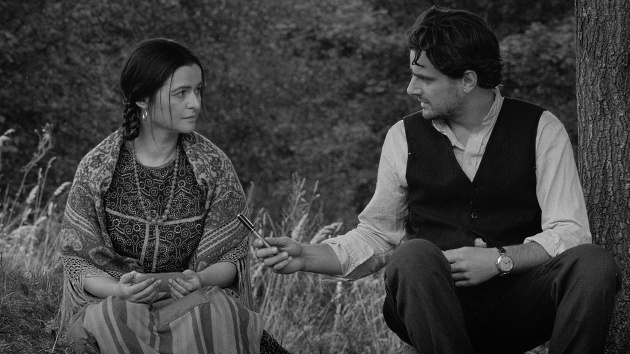 Judging from this list, you'd think to ask the Polish to make films in color. But when their black & white output is this beautiful, why even bother? This film is about one of the most famous poets of the 20th Century, a Polish Rom named Papusza, Although her works were lauded internationally, she was outcast and driven insane by the Polish Rom, who accused her of betraying their lifestyle. Cue Patryk Czekaj with his review! 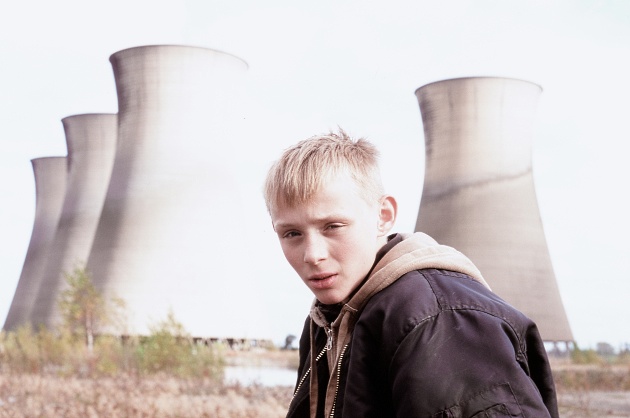 Two boys in poverty-struck Britain get kicked from school and try to make money selling scrap metal, until one of them gets spotted for becoming a jockey. This film has been winning awards all over the world throughout 2013, and it was a big success in Rotterdam as well. 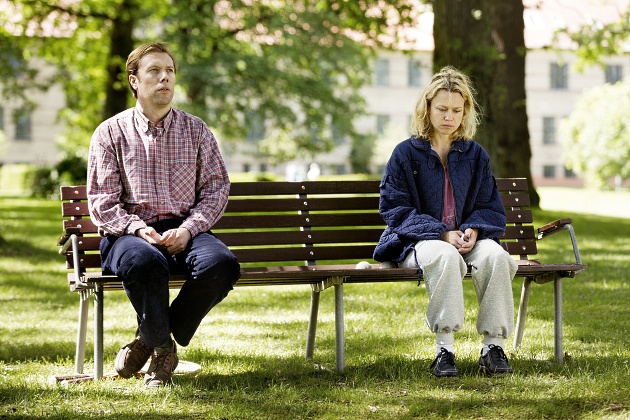 A schoolteacher kills her baby during a psychotic fit, and gets sent to an asylum. Instead of abandoning her there, her husband, parents and colleagues work hard together to get her treated instead of punished. Will they succeed in creating an opportunity for her to rejoin society?

This is one fantastic, stunning film, and a review will follow shortly. 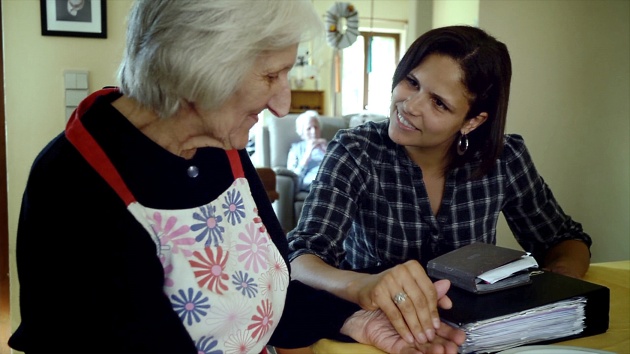 Another documentary, and another World Premiere, this time about the increasing number of people in Europe suffering from forms of dementia. This Belgian film follows seven people over the course of a year, and shows their increasing loss of memory and identity. But it also shows the love and care given to these people, and how they still find ways to express and communicate their feelings, for instance through music. While I haven't seen this one for myself yet, people have told me this was a very touching film, and surprisingly full of humor. 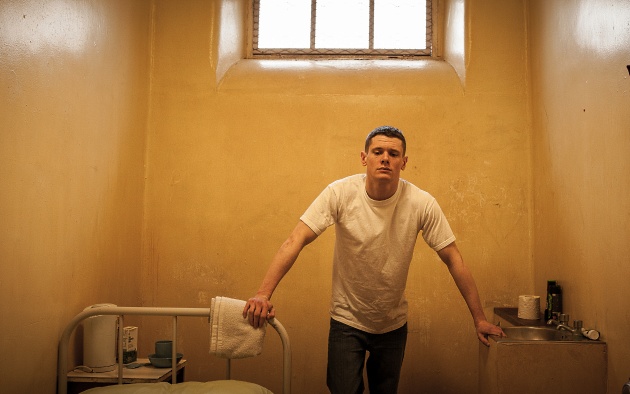 This is a gritty British drama about a youth in prison, who becomes so unmanageable that he is "starred up"; meaning he's sent to a prison for adults even though he's not 21 yet. But this specific prison is special: his father is held there as well, which leads to a confrontation.

In his review, Jason Gorber says the film is a pleasant surprise, raw, powerful, and impressively told! 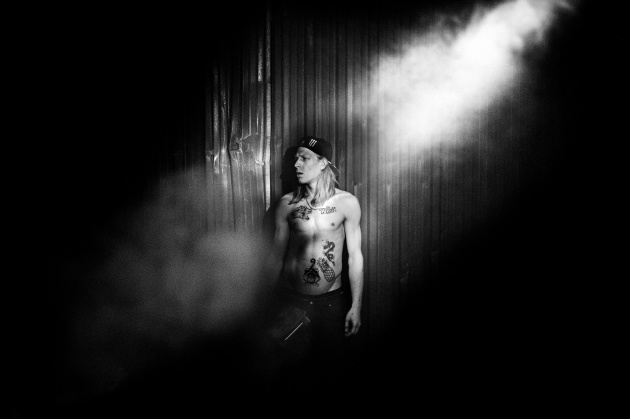 And here we have another documentary World Premiere playing specifically for the home crowd: a film about Rotterdam's internationally famous extreme skater Tim Zom aka. "Zombie". This film is made with great music and great flair, and shows the amazing stuff Tim can do with a skateboard, but doesn't deify him. Instead, it shows him as an incredibly talented asshole, without any respect for other people's property, who seems to be on the path to become a bit more reliable.

A full review will follow shortly. It has quite a story to tell and played very, very well to the Rotterdam audience. 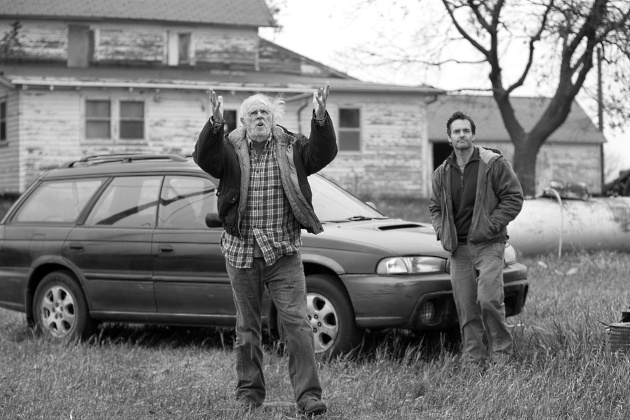 Just imagine what the percentage of people voting a 5 must be, to get an average of 4.678!

The winner of the UPC Audience Award this year is Alexander Payne's famous tragicomedy, starring an incredible Bruce Dern as a senile old man who thinks he's won the lottery.

Ryland Aldrich reviewed the film from Cannes last year, and while he was not quite as positive as the Rotterdam audience, he did think the film delights more than it disappoints.

More about Starred Up