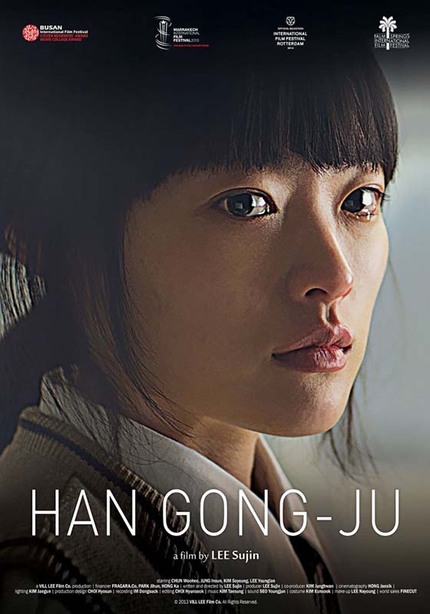 One of the most haunting films at this year's New York Asian Film Festival had to be HAN GONG-JU. Loosely based around horrific real life incidents in Korea, director Lee Su-jin captures in his first feature the waking nightmare a teenager must face after a brutal rape.

WARNING: There be spoilers!

The Lady Miz Diva:  Why did you decide to make a film about this subject?

Lee Su-jin:  There a series of things that continue to make me think deep thoughts and those things tended to be rape, bullying, and suicide, and those are the starting point of the subject of this film.

It's a fictionalised account, but did you do a lot of research into the actual Miryang case?

LS-j:  Not necessarily.  The Miryang incident did work as a form of motif, however I don't prefer to use any specific events or people, because I don't like to say that this film is a re-creation of those incidents.

That's interesting, because you actually use some of the terrible things the officers in that case did and said to those victims in the script, like when the cops say to Gong-ju, "You're embarrassing our town," when she's brought in to identify her attackers.

LS-j:  That is true.  I can understand how you can see that in a way.

Were you careful about how much actual information you put into this film?  Were you conscious of using too much real dialogue that would make it too close to the actual incidents?

LS-j:  I can see that happening as well, and I think that's understandable, but I don't think that one sentence can determine the entire film or the entire incident.

HAN GONG-JU uses the overlap of present and flashback, as well as the inner world of Gong-ju herself to lay out the narrative.  How did you pace that or sketch it in your head so that you didn't lose the viewer?

This script asks a lot of its lead. How did you know Ms. Chun Woo-hee was the right person to play this very complicated role?

Did she continue to stay in character after the filming day on your set was over?

LS-j:  What I personally wanted without letting anybody know was for Chun Woo-hee to continue to remain in character throughout the entire set, even after I called cut.  However, I couldn't necessarily force her to do such a thing because it could cause damage on her psyche.  I think the actress did a great job handling that, and when we called action, she was in character, once we called cut, she immediately wanted to come out of character.  I think she did a good job handling herself in that way.

Why did you want her to stay in character the whole time?

LS-j:  It was just my personal greed.  But I think that's like every director's greed.  However, I did not force her to do that.  So the way I worked with her was we would just have a discussion before we began shooting, about what kind of feelings will be focusing on for the day, and then what did we last shoot, and what those feelings were, and what the next upcoming scene was going to be connected to the scene.  So those were the primary discussions that I had with the actors.

Would you please clarify something to me? I wasn't quite sure what Gong-ju's father had done or meant when he says "trust in your father," has her sign some papers and talks about power?

LS-j:  That scene was to express a father's ignorance and neglect. The father is an alcoholic.

The rape is staged incredibly; very disturbing and the sight stays under the viewer's skin.  It must have required a lot of trust between director and actor?  How were those sensitive scenes handled? What did you do as a director to make your actors feel safe?

LS-j:  I shot the rape scene first, that was the first scene I shot.  I had to explain why I had to shoot the scene first to all the staff and cast.  The actors understood that reason.  The whole experience was incredibly burdensome for me and for the actors, but we shot that one scene just on that one day.

Was that to get that burden out of the way so you could progress with the rest of the film?

LS-j:  It wasn't in order to get the burdensome parts out of the way, it was in order to embrace the most burdensome and dramatic and painful parts and for everyone to deal with throughout the rest of the production as we progressed.  I wanted the actress not to be acting superficially, and we on set, the cast and crew all had to understand what kind of film we were shooting and that is why we shot that scene first.


You make a point of showing all the adults around Gong-ju constantly telling her, 'It's not your fault,' but then they ostracise her and seem to blame her at every turn.  At one point, she's even homeless.  What do you think is society's role in the aftermath of what happened to Gong-ju?

At this festival, there's HAN GONG-JU, HOPE by Lee Joon-ik and MOEBIUS by Kim Ki-duk. Each movie features rape and two of them are based on true stories. Is this due to a broader feeling of sympathy and compassion toward victims of these crimes in Korea? Was that any part of your motivation?

LS-j:  No, I don't think so. I feel like, wouldn't it be preferable not to tell such stories?  Director Lee Joon-ik's film came way after HAN GONG-JU. HAN GONG-JU finished production way sooner.  And that movie's commercial; so that took a long time to shoot and then it made a quick screening, a quick premiere.  But ours, we shot a while back, but its premiere took a while to get there.

This movie could've been a very sad story, but you are filled with hope for Gong-ju's survival.  What made you see this tragedy and think to write a story about hope and a young girl forced to become a strong woman?

Why was the ending left ambiguous? Did you envision Gong-ju living?

LS-j:  In my opinion, Gong-ju is alive.  She swam to safety and lived.  And the script that I wrote also has the same detail that Gong-ju is alive, but the audience's reaction was typically polarized between those who thought that she died and those who thought that she did not. But the reason why the ending is important is because after the film is over, any person who was like Gong-ju that we encounter, we have a responsibility to them; to be able to meet with them and we will have some sort of experience that we took away from this film whenever we encounter other Gong-ju-like people.

We were just talking about commercial versus independent production and there's been a lot of discussion about how successful this has been as an indie film.  Could HAN GONG-JU have been made within the studio system?

LS-j:  Ultimately, no, this would not have been a commercial film.

HAN GONG-JU has received so much acclaim including a huge honour given by Martin Scorsese.  With that kind of reception, do you sense a higher expectation for your upcoming work?

LS-j:  Winning awards is a bit of a bonus.  I don't think it's necessarily a good motivation to think about world acclaim or festival acclaim.  I don't think that should be the reason why I make my next film.  Of course given this film's current success, I do feel a bit of pressure, but with my next film, all I really want is for me myself to be satisfied with my project.


This interview is cross-posted on my own site, The Diva Review. Please enjoy additional content, including exclusive photos from the festival there.