J Hurtado
Editor, U.S. ; Dallas, Texas (@HatefulJosh)
Tweet Post Submit
Our good friends, and friends of all fans of east Asian films, Third Window Films have given ScreenAnarchy an exclusive early look at their 2015 slate and it is marvelous!

Third Window Films has a history of bringing not only the finest contemporary Japanese and Korean films (along with a few choice cuts from Hong Kong), they are also the foremost Western distributor rescuing films from Japan's recent past and restoring them in HD. Over the last four years, Third Window has moved from exclusively distributing and releasing already produced Japanese films into the world of production themselves with Sono Sion's The Land of Hope, and 2015 brings the UK home video release of their second co-production, Fuku-chan of Fukufuku Flats. Along with that film, Third Window is also on the verge of releasing Greatful Dead by Uchida Eiji, and after that it only gets better.

In addition to these known titles, Third Window is preparing an insane slate of new releases as well as world-exclusive English subtitled Japanese classics from the '90s. Take a stroll through our gallery and see what exatly they have in store! 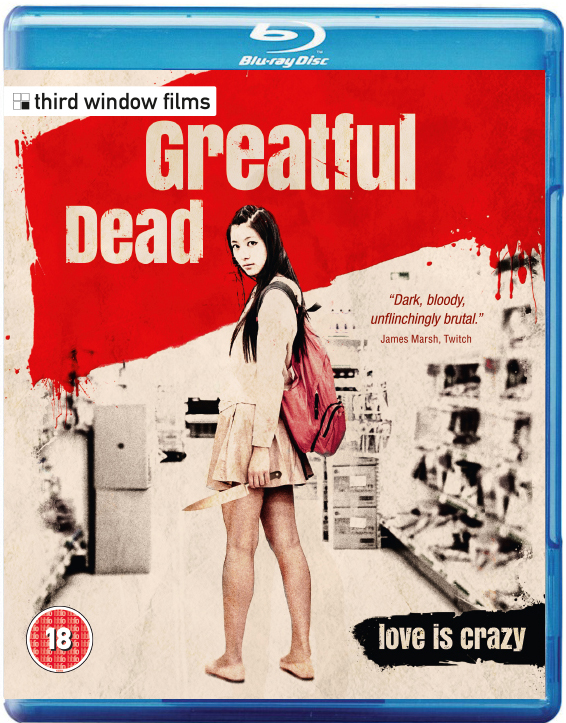 First up on January 26th is the Blu-ray of Uchida Eiji's Greatful Dead (グレイトフルデッド), about which James Marsh said:

The combination of Uchida's slick no-nonsense direction, layered, socially-aware yet genre-literate script and Takiuchi's excellent central performance, result in a smart package that should finally see Uchida recognised outside his own country and encourage the exploration of his back catalogue by a wider audience. If nothing else, Greatful Dead will certainly guarantee that whatever its director and female lead turn their hand to next, it will be enthusiastically followed by their newfound overseas fanbase. Dark, bloody, unflinchingly brutal, yet also laugh-out-loud funny, genuinely touching and with a profound social conscience, Greatful Dead is the real deal. 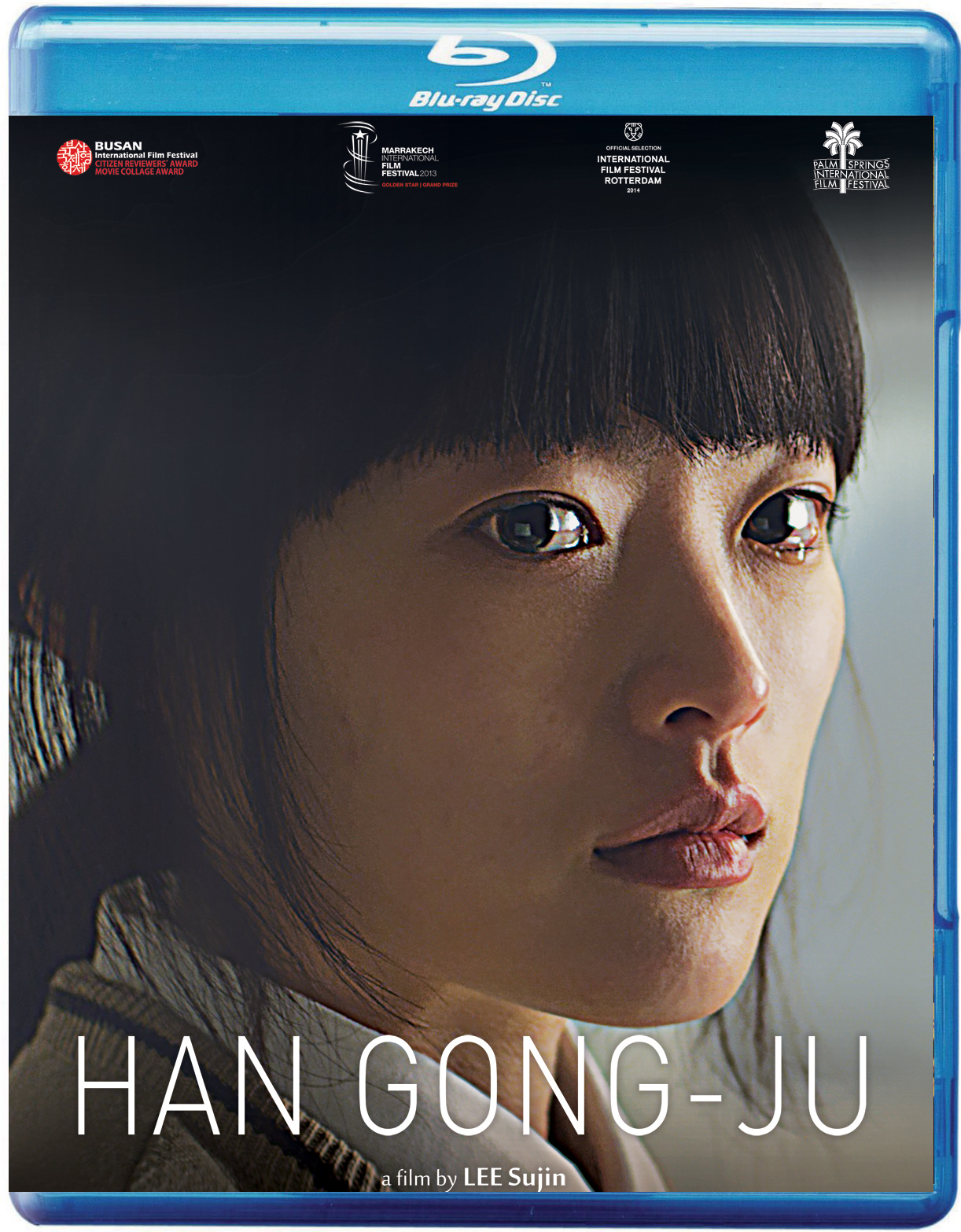 Next on April 13th is the Blu-ray of Busan favorite Han Gong-ju (한공주). Pierce Conran was emotionally overwhelmed by the film, a treatise on loss and discovery:

Though beautiful and often sweet, Lee's film was a deeply unsettling experience that frequently had me in tears. When the secret is revealed, bit by bit, the impact is immense but even more troubling is how people in the film react to her predicament. For someone in need of the most tender kind of understanding and affection, she is plagued by shame, to the point where people distance themselves from her or aggressively label her a liar to shield themselves from shame.

Lee's surprising and overwhelming debut was for me the biggest surprise at Busan this year and I hope that many will have the opportunity to see it. In any case, a great new talent has been found in Lee Su-jin and I can only imagine what he might have in store for us next. 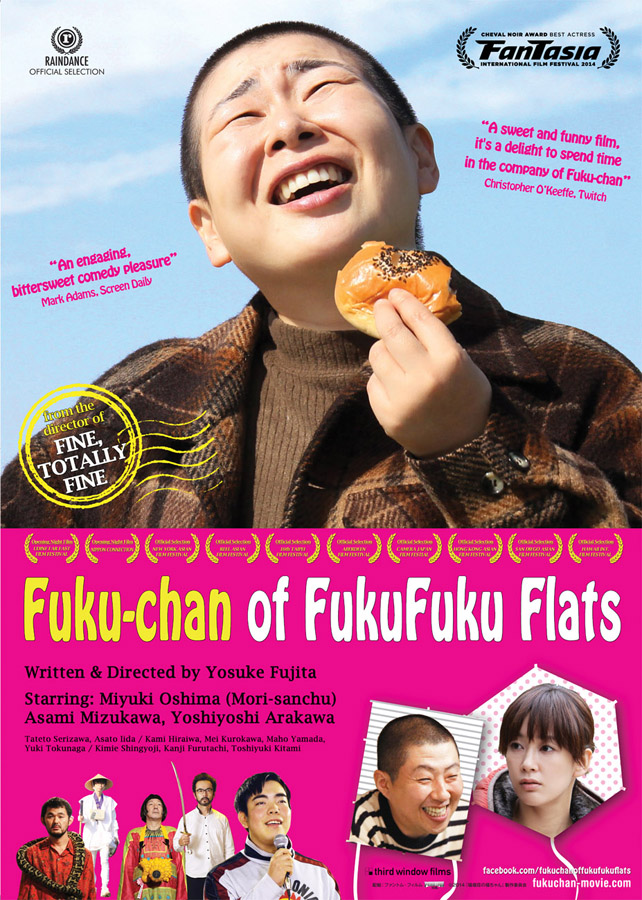 On May 11th we'll see the DVD release of Fuku-chan of Fukufuku Flats (福福荘の福ちゃん). Our man in Japan, Christopher O'Keeffe has seen the film and was mighty impressed:

Fuku-chan of Fukufuku Flats has enough laughs to make it work as a comedy but it's the drama that gives it substance. While it risks heading into darker territory towards the end the drama never drowns out the comedy or descends into mawkishness. A sweet and funny film, it's a delight to spend time in the company of Fuku-chan and the quirky outsiders he collects around him. 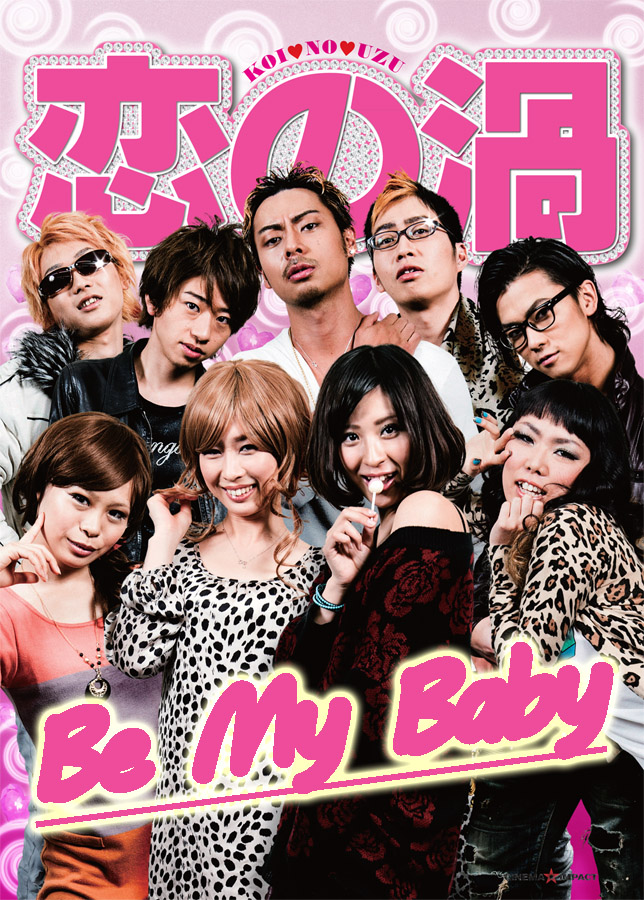 On May 25th, we can look forward to the DVD release of Be My Baby (恋の渦), which Patryk Czekaj reviewed at Udine:

Definitely the biggest surprise of the second day of this year's Udine Far East Film Festival was One Hitoshi's brutally realistic, dialogue-heavy drama Be My Baby. Shot and edited on a miniscule budget, One's sophomore feature examines the lives of nine seemingly futureless 20-something Tokyoites inhabiting Japan's lower social strata. Be My Baby delves deeply into a rough and uneducated environment, where still-relatively-young individuals lacking any viable prospects for a fruitful life go about cheating, deceiving and humiliating one another in a horribly brazen manner.

Surprising though it may seem, the film accentuates some striking issues concerning the hardships of the characters' somewhat tragic lives without leaving a few apartments, and in those cramped spaces finds enough emotional baggage and pleasure-driven tension to keep the biting comedy and the conceivable drama alive for 138 minutes. One directs the inexperienced actors with great care and understanding, allowing them to cherish their passion for acting in the form of shamelessly improvised scenes. There's no weak link in the bunch. The ensemble cast plays together wonderfully, delivering many unforgettable and aptly energetic scenes (one resulted in a storm of applause). 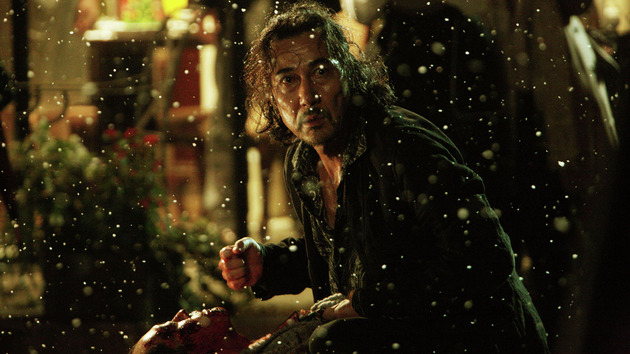 The last of the semi-solid release dates in the first half of 2015 belongs to Nakashima Tetsuya's marvelous World of Kanako (渇き) on June 22nd, a film that floored me enough at Fantastic Fest 2014 to earn a spot in my top ten of the year:

I'm a huge Nakashima Tetsuya fan, and I have been since Kamikaze Girls. His eye is unlike that of any other modern filmmaker, and his pop sensibilities are the kind that will either make you fall in love or send you away screaming. World of Kanako brings together Nakajima's artistic flair from his earlier films like Kamikaze Girls, and mixes it with his dark side, like Confessions, to make what is closer to being his masterpiece than anything since Memories of Matsuko.

Put Nakajima together with Japan's finest actor, Yakusho Koji, and you've got something special. Yakusho has been branching out from his popular film roles with turns in films like 13 Assassins and The Woodsman and the Rain, but Kanako is a whole other beast. I've never seen Yakusho this filthy, both literally and figuratively, and it's a role that suits him well. 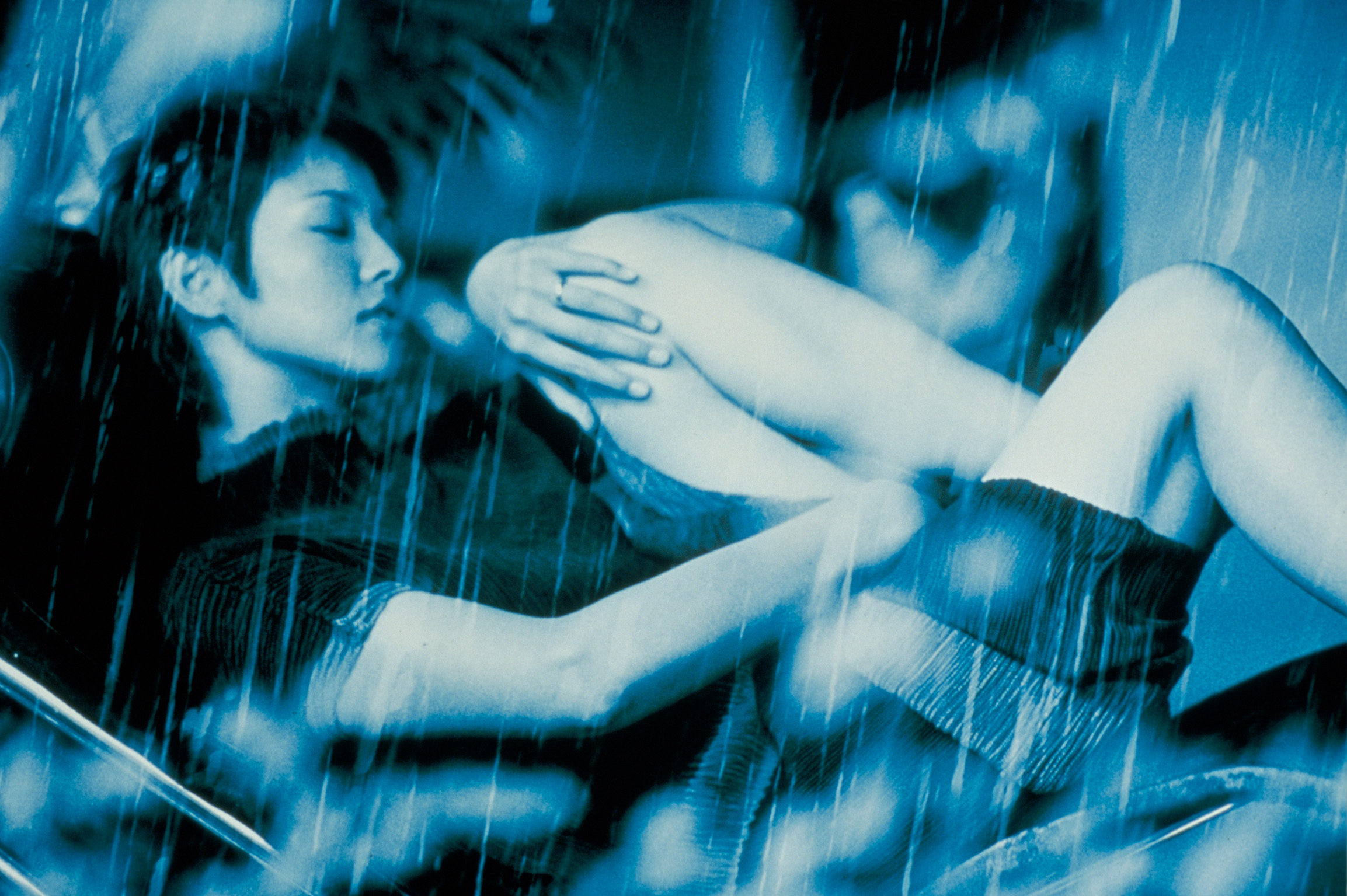 In addition to these releases, Third Window will be continuing their truly heroic tradition of remastering and releasing recent Japanese classics in HD. First up in August will be Tsukamoto Shinya's A Snake of June (六月の蛇). This is a film I adore, and one that I have always felt was underserved by the film community. It's unique visual style will be well served on Blu-ray, and if Third Window's previous Tsukamoto releases are any barometer, it should be amazing. 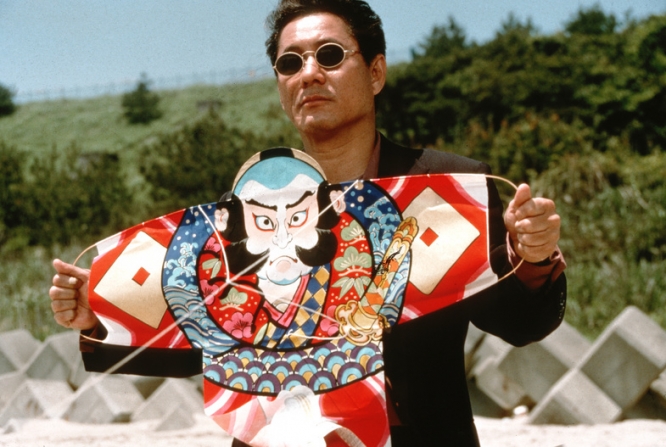 Closing out the year (unless TWF has any further surprises up their sleeves), will be a trio of English friendly Blu-ray world premieres from none other than Takeshi Kitano. Third Window Films has acquired UK home video rights to three of Kitano's most well regarded late '90s films and I could not be more excited. First up, in September we can look forward to Venice Golden Lion winner, Hana-bi (はなび)(Fireworks). Then, in October comes Cannes favorite, Kitano's Kikujiro (菊次郎の夏), perhaps his most optimistic film. Finally, November will bring Kitano's divisive Dolls (ドールズ), a film which I have yet to see, but intrigues me greatly and now I'm gritting my teeth to see it in the best presentation possible later this year.

Third Window Films will work together with The Raid’s Gareth Evans to bring these 3 Takeshi Kitano titles to English subtitled blu-ray for the first time, with all 3 featuring new 2K HD transfers. Gareth Evans, a huge admirer of Kitano, says “how important it is as a fan for these films to finally see an English subtitled HD release. These are essential works of a master director.” Each film will feature an exclusive introduction from Evans. I cannot wait, 2015 is going to be a great year!

More about Be My Baby