Destroy All Monsters: What's Wrong With HER 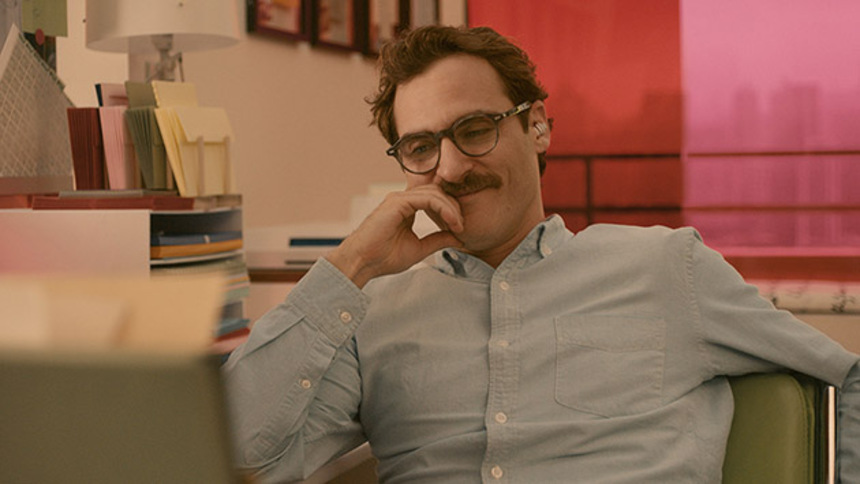 The thing that immediately skeeved me out about Her, which I presumed at the time (and still do) was the key element of the text, is only this:

When Theodore (Joaquin Phoenix) first "meets" his operating system, Samantha (Scarlett Johansson), she is an out-of-the-box piece of software. ("She" doesn't even have "her" voice yet - the initial voice is a pleasant male.) The nascent system asks Theodore three questions, the latter two of which are of a pathologically hilarious Freudian nature: what gender would you like your OS to be, and how was your relationship with your mother? - arguably the two questions by which we could, if we were able to answer them honestly, sort out our entire compass of adult relationships from puberty to death. The OS then cuts Theodore off and begins the stated process of adapting itself to Theodore's particular personality.

From here, i.e. from moment one, Samantha is - to my reading - a constructed personality based on Theodore's conscious and unconscious desires. Every single thing that she does (or does not do) from this point forward is, from my understanding of the science fiction elements of the text, based on a discreetly running algorithm that is, like Google is trying to do with us, getting to know Theodore better and better at every interaction, and iteratively re-writing itself to improve the Theodore-Samantha touch experience.

In other words, Samantha is not a person.

At least, she's not a person in any way that I can construct the idea. Even her third-act evolution past Theodore into some kind of heightened A.I. that eventually chooses to abandon the human race altogether is part of the "be what Theodore likes/wants/needs" program, as far as I can tell.

I might even argue that, based on what we see and know about Thedore over the course of the movie, he wanted and needed Samantha to leave him. (Theodore's response to the "How was your relationship with your mother?" question leaves a significant clue. "If I tell her something that's going on in my life, her reaction is usually about her," Theodore replies, and the OS finishes its analysis, perhaps rooting out that Theodore needs to confront his unresolved feelings about loving partners who put their needs above his own.)

But as such, Samantha is still not a person; or at least, she's a female partner for our male hero who is wholly constructed out of what that man wants. Perhaps for me to deny Samantha personhood is taking it too far; but I nonetheless find Samantha a deeply unsettling idea.

Now, as I've said, I presumed this to be Her's point, in the Solaris sense of the idea - i.e. all of our relationships (but in this case, specifically, with our lovers) are really just relationships with our inner constructions of those external personalities. We absorb the data from the people we fall in love with, and construct what we think is an understanding of the person.

But because this understanding is inside us, and therefore entirely subject to our whims and flaws and every other subjective thing about us, the person we think we're in love with doesn't really exist. They're a mirror construct - a reflected image, with the reflector in this case being the funhouse mirror that is Us.

This is the direction in which I thought Her was travelling, but perhaps I was wrong. The reaction to the film has, for the most part, taken it entirely straight: that a man falls in love with a piece of software, and that is the point, and oh isn't that interesting.

Of course it is: in terms of our relationships with online personae, Her is batting cleanup in a decade-long conversation about how Facebook and its brethren have completely rewired our emotional lives. And perhaps further down that direction, there is the question - which Her does seem to address - of how much this cyber-based distance between us and other IRL human beings might be changing and re-shaping the way we interpret, interact with, and respond to other peoples' personalities. When you're texting someone late at night, who/what are you texting?

But I don't trust Her as a love story (or anti-love story), because I don't trust Samantha as a character. I don't think she's really there. I think she's a few iterations above the goofy, potty-mouthed (and, importantly, heartily misogynistic) video game gnome who Theodore interacts with in the early parts of the movie. I also think she's a few iterations above the naked pregnant woman (again, importantly, pregnant woman, an image as ripe as it is canny) dancing in Theodore's fantasies as he attempts to get off during a phone sex chat.

In other words, I think Samantha exists entirely within Theodore's mind as a fantasy plaything, with the slightly inconvenient rider that she also exists as a piece of software on a computer. She's a tailor-made thing - the Manic Pixie Dream Girl as an iPhone app - and if that's the case, Her seems to be telling me that this guy, and by extension maybe all guys (and maybe all girls, though I'm not one, so I couldn't tell you) are only falling in love with iterations of our own programming, writ large in the hardware of other peoples' bodies.

If that's the case, I'm behind it as a piece of storytelling, but I don't think it's particularly sweet.