New To Netflix: Busting Genres Around the World

Kurt Halfyard
Contributing Writer; Toronto, Canada (@triflic)
Tweet Post Submit
Welcome to another week of Netflix picks and pointed mentions from the various territories around the world:  Korean films in The Netherlands, Icelandic films in Mexico, American Films in the UK, Indian films in Canada, and British films in Scandinavia.  Got that?  But wait, there is more, many of this weeks edition blow the lid of easy categorization or genre.  Docs about dicks, family dysfunction mashed with creature feature, housefly revenge musicals, and a pair of comedy sci-fi crime films. Onward!


J Hurtado and contributed to this story. 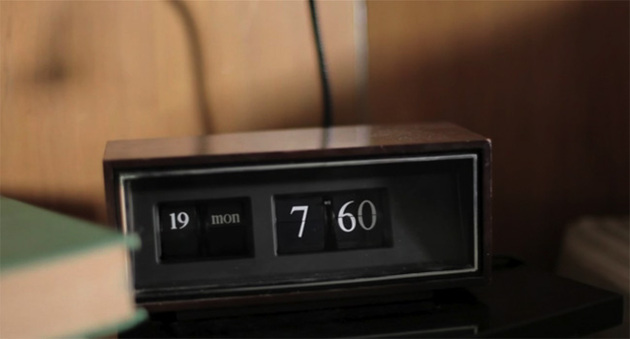 New In The USA: WRONG

Quentin Dupieux's genre deconstruction effort, Rubber, from a couple years ago, left some folks scratching their head, and others critical of its 'extended comedy sketch' nature; likely then, Wrong is probably not the right film for them.

With a bigger thematic reach, and a far more episodic structure, the film is likely as close as we will ever get to stand-up comedy in cinematic language. It is an absurdist masterwork that picks at the myriad mesh of tiny social contracts that make up the average person's day: Talking to the neighbour, ordering a pizza, petty politics in the office, having a polite phone call with a friend, and the like.

Visually, the movie has a real penchant for filmmaking gags, not the least of which is William Fichtner playing a pet-psychic guru as if he were Mr. Kobayashi from The Usual Suspects. 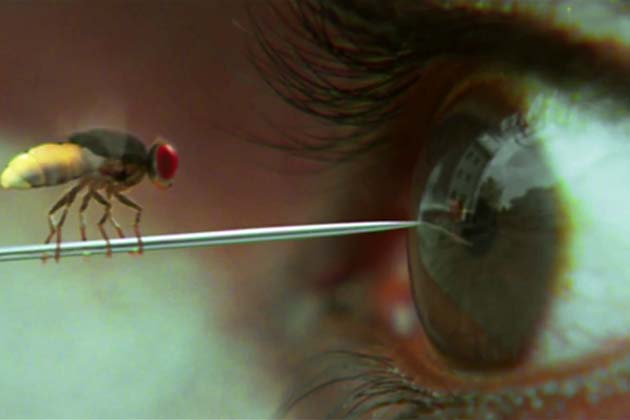 There are a lot of big fans in these parts of that 'Housefly Revenge' film from Andhra Pradesh's Tollywood.

Mashing together at least 10 genres and subgenres often without elegance or restraint, but easily making up for it with exuberance, heart and humour. Josh Hurtado declared it the best film of 2012:

"Every time I thought I had a handle on Eega, it threw me for a loop in the best possible way. Eega is easily the most flat-out entertaining film I've seen this year, bar none.

It's often said that the best filmmakers know how to show, not tell their stories, and if that's the criterion for master filmmakers, S.S. Rajamouli is someone you need to know about. Incredible action sequences, inventive storytelling, technical excellence, and laughs and gasps that just keep coming; Eega has it all."

The version offered his clocks in at a runtime longer than the festival-circuit cut of the film, but shorter than the original Indian version, but that really doesn't matter too much. SEE THIS FILM. NOW.

(Note: It is also available in The USA (also under the title, Makkhi, so no excuses, folks!) 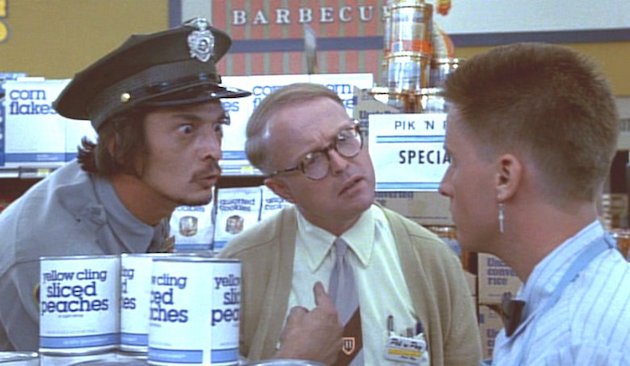 "The life of a repo man is always intense."

Alex Cox's punky cult oddity is an unabashed relic of the 1980s that still entertains tremendously today. Harry Dean Stanton has never been better than he is here (and his is a storied career of awesomeness) as he shows a crucifix earring'd Emilio Esteves the ropes on repossessing cars.

This is all fine and dandy until a Chevy Malibu containing radioactive alien parts enters the scenes and things start levitating and dying. Social Satire, great soundtrack and a distinct distaste for product placement all collide together in such a satisfying fashion! 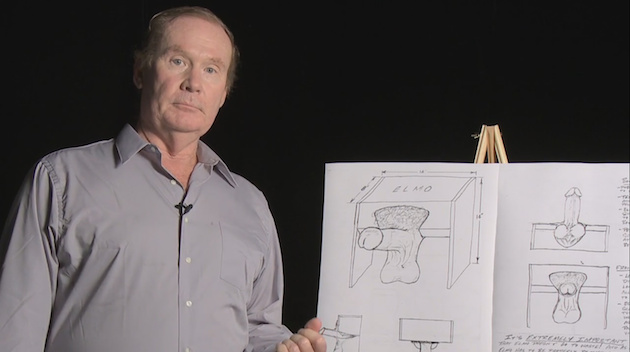 New In Mexico: THE FINAL MEMBER

A tight 80 minute doco on the the founder of the Icelandic Phallogical Museum, surprised quite a lot of folks on the festival circuit, not the least of was our own Jason Gorber who loved it and wrote:

"Sigurdur Hjartarson's own obsession to find a human specimen to complete his cocklection is paired with two incredible characters. Páll Arason, now in his mid-90s is a famed explorer of the hinterlands of Iceland, known throughout the land for his bravery, pioneering spirit and his prodigious proclivity for fucking.

Tom, an American in his 60s so eager to be the first to be placed in the museum, preserving his cock forever, that he's strongly considering having it removed along with a patch of pubic hair and the complete set of scrotum and testicles while he's still around to enjoy the view.

There are so many ups and downs that the film plays as some minor epic, touching upon things as disparate as ethics of self mutilation and the processes for embalming a giant sperm whale dong."

That is to say: We're given just as much of the story as we want." 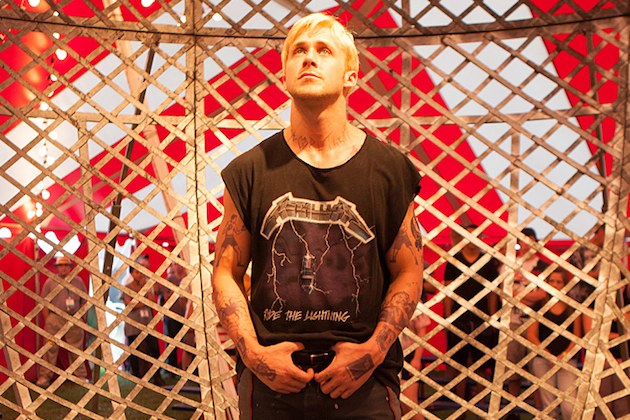 New In Brazil: THE PLACE BEYOND THE PINES

Derek Cianfrances' stylish, if flawed, follow up to his masterpiece debut film Blue Valentine runs out of gas when it trades Ryan Gosling for Bradley Cooper and reveals its crimes-of-the-fathers and cycle of violence for their sons theme.

But boy, oh, boy, the opening shot of the film, featuring Gosling walking all determined (that thing he does) across a fair ground to mount a motorcycle in a bit of stunt driving is a marvel of craft and the long take. Worth a look. 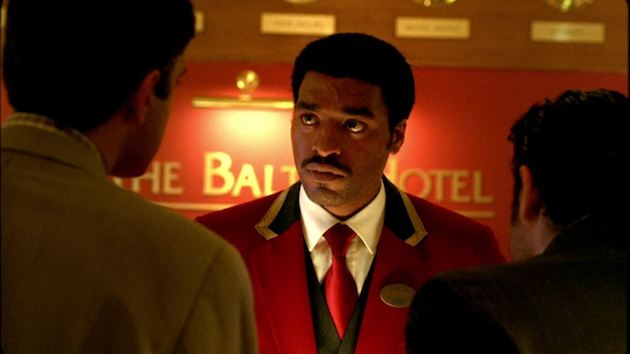 Sure Audrey Tautou got the lead billing in Stephen Frear's tale of the varied immigrant-underclass in the UK, but the film was really Chiwetel Ejiofor's major coming out party. He may get his Oscar for 12 Years A Slave, but he pioneered this style of giving smart, but empathy driven performances here as a Nigerian doctor working multiple service-jobs in London who discovers that some urban legends aren't legends at all.

Sophie Okonedo, Benedict Wong, Nicolas Winding Refn favourite Zlatko Buric, and a marvellously menacing Sergi López provide some excellent support, but this is Ejiofor's show through and through. 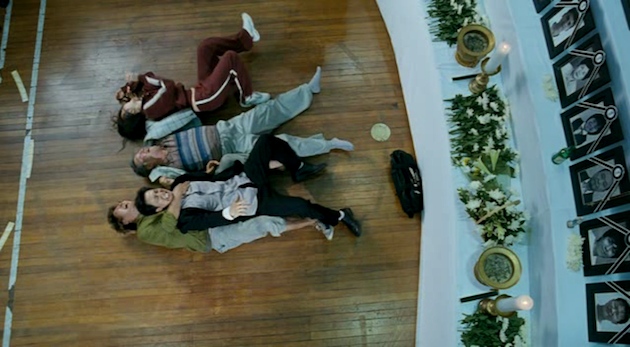 Does anything need to be said on perhaps the most talked about film on this website since its inception? Bong Joon-Ho's marvellous creature feature got just about everything right, and is the definitive statement on just why the Korean's are the best at genre mashing.

A family pulls itself together to fight a giant monster that one days slithers out of the Han River to steal away the youngest member. Song Kang-Ho has never been better as the narcoleptic and ineffectual dad and the rest of the extended family all play their roles pitch perfect. They are never better than in the scene pictured above where this is a group funeral held in a community centre that culminates in some great physical comedy.

More about The Host