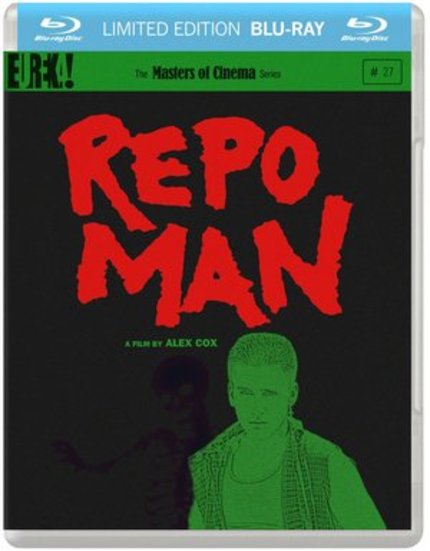 Another delayed review makes for a great triple feature here at ScreenAnarchy!

Two of my favorite punk rock movies made the jump to high definition in late 2012: Alex Cox's masterpiece, Repo Man, and Bruce McDonald's breakthrough road movie, Hard Core Logo. I have a long history with both, as a fan of punk rock movies going back to my earliest mohawked days. While the films are very different in terms of narrative structure, they share not only the backdrop of this music and culture that prides itself on antagonism, they are also films made in the spirit of punk rock. Disregard for authority and convention mark both films, to their great credit, and this makes them timeless, ripe for rediscovery by each new generation of punk rockers and film fanatics.

Repo Man is, in many ways, the fulcrum on which the early 80s punk movie boom balances. The film exposes punk for what it was in the context of the wider world, or rather what it had become. The optimism and political antagonism of early punk had begun to give way to the disillusionment and repressed anger of hardcore beginning around 1981, especially in suburban Los Angeles, where the film is based. Cox's approach to the culture is not exploitative, unlike so many of the similarly themed "punk" films of the time; rather, it approaches its punk characters as human beings, which is a welcome change.

The story, an original from Cox, revolves around a shiftless punk named Otto (Emilio Estevez) who gets caught up in the repo biz when he is unwittingly recruited by grizzled lifer, Bud (Harry Dead Stanton). The two find themselves in the middle of a race to find a certain car that just might happen to have the body of a dead alien in the trunk. The dead alien doesn't concern them, though, it's the car and the commission it brings that is their concern. Otto quickly adapts to the high-octane, no-sleep life of a repo man and plows through his days at full throttle on the way to his next score. Punks and repo men aren't much different in that way. To explain much more of the goings on would deflate the joy that Repo Man still brings after almost 30 years, so I'll simply tease that it's definitely worth your time.

Alex Cox's fully developed and well-written characters are brought to life by a fantastic cast mixing established character actors and new blood in a way that works astonishingly well. While Estevez and Stanton are certainly the centerpieces, and Stanton's performance in particular is breathtaking, the supporting cast is no less impressive. One great discovery in Repo Man is Otto's loser buddy Kevin, played by real life punk rocker (and future member of The Circle Jerks) Zander Schloss, whose clueless nature is effortless on screen. The other standout performance, in my eyes, is that of Tracey Walter as the half-crazy Miller, whose "plate of shrimp" speech is one of the film's stand out moments, along with his "John Wayne was a fag" speech. This is truly one of the finest written films of the eighties, and to have actors of this caliber taking it on is a wonderful document.

Though this film was recently released by Criterion in the US, I don't have that disc to compare. The copy that I have is from the UK's Masters of Cinema, and it is amazing. I've seen Repo Man at least a dozen times and didn't have high hopes for its appearance in HD, but once it was cleaned up it looked and sounded really amazing. As good as the video is, and it is flawless, it was the audio track that really stood out. A film with a soundtrack as good as this deserves a great sound mix, and this definitely qualifies.

From what I'm able to glean online, the MoC and Criterion discs share many of the central bonus features, so I'll try to give a brief overview of the main draws. The first is the infamous "Melon Farmer" TV version of the film presented in 1080i. This is the redubbed version of the film with all profanity altered for TV and is so famously ridiculous that it's been bootlegged for years. There's also a featurette from the previous DVD version of the film titled Repossessed which is about a half an hour long and reasonably in-depth. In fact, apart from the TV version and a ten minute exclusive intro from Alex Cox, all of the extras on this disc were available on the previous Focus Features DVD special edition: a Harry Dean Stanton interview, deleted scenes, and a commentary. The real gem, in my opinion, is the booklet, a 44-page illustrated production history designed by Cox himself and reproduced in Criterion's Blu-ray edition. This is probably the finest booklet I've seen from Masters of Cinema to date, and one I revisit a lot.

In short, if you're in Region B land (UK, Europe, Australia), this is a great disc to have. If you're in a Region A part of the world (North America, South America, East/Southeast Asia), the Criterion is almost identical but with fancier packaging. Take your pick. Nerds will want both, and I count myself among that group. 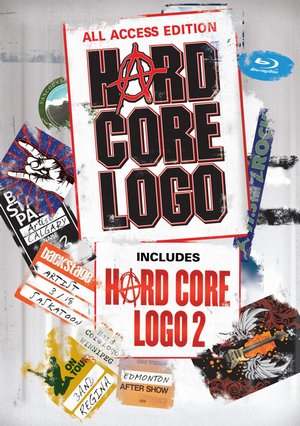 Next up is the Hard Core Logo series, which I will approach as a single entity, even though one is significantly superior to the other. The original Hard Core Logo is Canadian filmmaker Bruce McDonald's punk version of This is Spinal Tap mixed with a comedy version of classic punk road doc, Another State of Mind, a tour document of a fictitious band of legacy punk rockers fighting to maintain their relevance in the modern world of 1996. This was a time when, thanks to bands like Green Day, The Offspring, and Rancid, punk was en vogue, and many groups that were popular in the early days began to reform. Whether it was for love or money depends on the band, but they were certainly all heading out onto the road with dollar signs in their eyes, only to be sadly disappointed when the reality came crashing down on them.

The conflict in Hard Core Logo centers around lead singer Joe Dick and his guitar player Billy Talent. Talent has been recruited by a mainstream rock group and is simply biding his time in HCL as a weigh station between the dumps and stardom and Dick resents every minute of it. Along the way we have unmedicated psychos, benefits for punks in need, and lots and lots of attitude from Joe Dick. McDonald does a decent job of staying out of the way, but his "documentary" facade goes by the wayside early and often through the use of multiple cameras and general staging. Nevertheless, the film is a fun ride that shows the evils that bitterness and envy can inflict upon people who are insecure in their own skins.

The second film follows McDonald, now very much a part of the story, as he documents the trials relating to another Canadian rock group, Die Mannequin. Die Mannequin, a real rock group, is led by a singer/songwriter named Care Failure who thinks she is possessed by the soul of the late Joe Dick (spoiler alert: Joe Dick dies at the end of HCL). Intrigued by the idea of watching this woman, in whom he places no credibility at all, transform herself into a man he feels somewhat responsible for killing, McDonald takes the job and follows this woman and her band into the Great White North to watch them record their next album.

I found myself frequently distracted while watching Hard Core Logo 2. It's not that I didn't try, I sat there and really wanted to get into it, but there were several things getting in the way. The new digital aesthetic used in the film was distracting, especially since I did a double feature and the films look so very different. I didn't find anyone in the new film I could connect to emotionally, either. In HCL, I know those people, I am those disaffected pissed off youths turned angry adults. Care Failure isn't angry, she's vapid and bored, which makes her boring. Finally, and most importantly, I hated the music. It reeks of late 90s alternative rock radio, and that makes me want to vomit. So yeah, I didn't like Hard Core Logo 2.

Be that as it may, the two films appear on the same Blu-ray disc, so you don't get one without the other. The Blu-ray from Video Service Corp comes in a steelbook and presents both films adequately. There isn't a whole lot to crow about, however, as the HD transfer of the first film is good but not great, and the digital origins of the second film make it kind of hard to mess up. The extras on the disc weigh heavily in favor of the second film, simply because in 1996 people weren't as hip to getting behind the scenes footage for the secondary market as they are now. I would have loved a retrospective featurette of some kind for Hard Core Logo, but all we get is a commentary. HCL2 gets a bunch of b-roll footage, EPK type stuff, and lots of interviews, lovely for context gathering, but for a film I'm not very interested in, it's not that appealing.

There's almost something wrong feeling about watching movies about punk rock on Blu-ray. However, I'll get over that, and you will too once you get a peek at these. Now we just need The Decline of Western Civilization and Dudes to make their digital debuts, along with Blu-rays of Suburbia, Another State of Mind, and so many others. Upstart label Vinegar Syndrome is helping to fill the punxploitation void with a June release of Punk Vacation, but there's a long way to go!  Start here, though, you won't be disappointed.