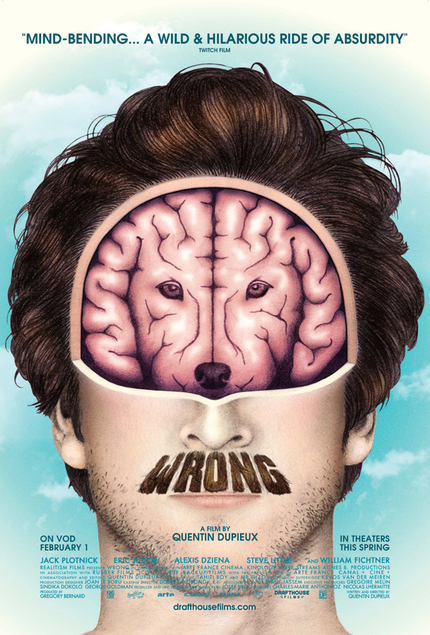 Usually when we're promoting a film that we like, such as Quentin Dupieux's Wrong, we usually want to include a quote from our review so you we really, really mean it. But the folks at Drafthouse Films have done the work for us, it seems, and placed a quote from Chase Whale's review right there at the very top of the new poster for the film. Saves me a lot of time and we can move right along to the latest trailer. But first, about the film...

Dolph Springer (Reno 911's Jack Plotnick) awakens one morning to find he has lost the sole love of his life - his dog, Paul. Desperate to reunite with his best friend and to set things right, Dolph embarks on a journey which spirals into the realm of the absurd. On his quest, he drastically alters the lives of several severely bizarro characters, including a promiscuous pizza delivery girl (Entourage's Alexis Dziena), a mentally unstable, jogging-addicted neighbor, an opportunistic French-Mexican gardener, an eccentric pet detective (Steve Little of HBO's Eastbound And Down) and most mysterious of all, an enigmatic pony-tailed guru, Master Chang (William Fichtner) who imparts his teachings to Dolph on how to metaphysically reconnect with his pet. From fearless cinematic surrealist Quentin Dupieux, the director behind the head-exploding Rubber, Wrong is a wholly original and hilariously hallucinatory universe all its own.

Indeed. Wrong will start a theatrical run on March 29 and will be available on VOD on February 1. Good boy.
Tweet Post Submit