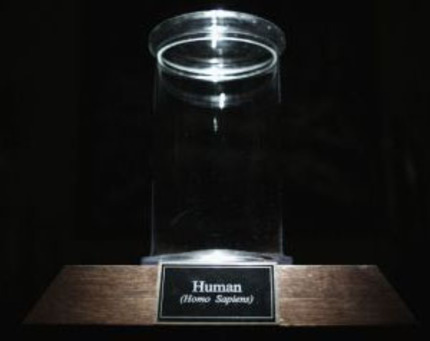 In one of the finer examples of the synergy caused by pairing two separate films together, the programming staff at Hotdocs made a wise move of presenting an evening of all things phallus.

Manhood is a short doc from some students at the local Humber College. It's a harrowing tale of a young, cocky cocksman who incurs a penile fracture while on vacation in the Caribbean. In nine minutes we're treated to shots of vegetables being snapped on screen, man-on-the-street interviews with uncomfortable passersby, and a funny, verbally graphic retelling of the story of the injury.

It's a brief 9 minutes, but they manage to cram in stories of crazy vacation sex ("the best kind!") and the pools of blackened skin hanging from below the head of his cock as the hemorrhage was slowly being reabsorbed by his body. Gruesome sounding, to be sure, but well conceived and told, and in the end hilarious. Manhood's a capable work from young filmmakers who despite some slightly clunky edits and awkward moments nonetheless give the story justice and do so with great charm.

This led into the even more extraordinary tale of the quest of the founder of the Icelandic Phallogical Museum to complete his collection. I had assumed, wrongly, that The Final Member would be a trifle, yet another doc that you pretty much get the gist of right from the outset, or even just via the title card. Instead, we get one of those too-weird-to-not-be-true stories that some documentaries excel at.

Sigurdur Hjartarson's own obsession to find a human specimen to complete his cocklection is paired with two incredible characters. One is a famed explorer of the hinterlands of Iceland, known throughout the land for his bravery, pioneering spirit and his prodigious proclivity for fucking. Now in his mid-90s, Páll Arason has tracked his sexual exploits in a little book with scratchy notes of names, and has been promising for years to be the one to have his bangers and mash preserved in a preset area of the museum.

Arason's age has resulted in a shortening not only of the number of his days left on Earth, but also his penis, resulting in second guesses about preserving for posterity a totem that's a smaller version of its celebrated former glory.

Meanwhile, in America we meet Tom, a man in his 60s so eager to be the first to be placed in the museum, preserving his cock forever, that he's strongly considering having it removed along with a patch of pubic hair and the complete set of scrotum and testicles while he's still around to enjoy the view. Tom researches plastination laboratories, he sketches out dioramas, and pushes Sigurdur to allow for visitation rights during the off season. Most disturbingly, perhaps, is that Tom's vainglorious insistence on having the world celebrate his dear "Elmo" (yup, that's what he's named his prick) just might be fulfilled by his participation in this film.

These competing bequests, combined with Arason's failing health, provide some genuine tension within the film. There are some scenes that make one physically uncomfortable, from a plaster-of-paris mishap to the seemingly banal incising of some creature's junk until, Pop! the penile bone juts out past the head. Darkly horrifying it is, with Arason oblivious after 4 decades of preserving such schlongs over the years.

There are so many ups and downs that the film plays as some minor epic, touching upon things as disparate as ethics of self mutilation and the processes for embalming a giant sperm whale dong. Throughout we keep fearing that Sigudur is getting the shaft about getting his shafts.

At just under 80 minutes, we're given just as much of the story as we want, the pacing of the film more than adequate to sustain interest in every scene. Kudos to the filmmakers for not padding out the film the way that too many documentaries (and too many spandex wearing Rock Stars) often do.

Shots of Iceland and the environs of California are captured well, the music is extremely effective without becoming overbearing, all the hallmarks of confident and capable documentarians. The fact that this is a debut feature from Jonah Bekhor and Zach Math is even more remarkable, there's a confidence and swagger to the film that speaks of far more experience with this type of story telling.

Both The Final Member and Manhood in their own ways show remarkable restraint with such sensitive subject matter. One makes you want to travel the world to see a famed museum of trouser pythons, the other makes you never want to go on vacation or have sex again. Combined, they made for quite an evening of keeping up with the Johnsons, two memorable films about penises that are entertaining, informative and great additions to this year's slate of docs.