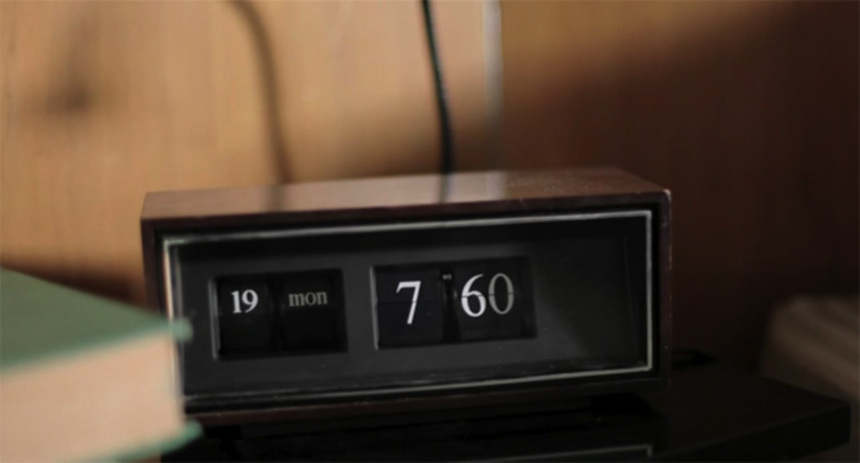 Quentin Dupieux's genre deconstruction effort, Rubber, from a couple years ago, left some folks scratching their head, and others critical of its 'extended comedy sketch' nature; likley then, Wrong is probably not the right film for them.  With a bigger thematic reach, and a far more episodic structure, Wrong is likely as close as we will ever get to stand-up comedy in cinematic language.  It is an absurdist masterwork, and this is only Mr. Oizo's second feature film.  The film picks at the very fabric of the myriad network of tiny social contracts that make up the average person's day:  Talking to the neighbor, ordering a pizza, petty politics in the office, having a polite phone call with a friend, and the like.  But of course, these are presented and dealt with by all the major and minor characters in a manner that is, well, wrong.  As in any  good comedy or a good storytelling, what happens with expectations are violated and how do we feel about that violation?   Playing like the longest and best Kids in the Hall sketch ever made, even the lead actor Jack Plotnick bears a resemblance to Kevin McDonald (and can do wonderful emoting with his eyebrows and hangdog face.)  Visually, the movie has a real penchant for filmmaking gags.  Much of the shocking (but not necessarily abrupt) punch-lines are executed by revealing things just outside the frame, or even within the frame via rack-focus, with the precision of a master comedian.  Often there is a complex series of reveals and pauses and doubletakes (which belies the overtly minimalist deadpan tone of the film) having the effect of keeping even a quick witted audience on their toes.  The opening sequence is in a strange way his riff on the great opening sequence of Once Upon a Time in The West.  Ok, maybe that is a bit of a stretch, but, like Rubber, there is as much (or more) comedy in the craft of construction as there is in the performances or dialogue.
The plot is quite simple.  Former travel agent Dolph Springer (Plotnick) wakes up one morning at 7:60 am to find his loving pooch gone from the house and nowhere to be found.  His neighbor, Mike (comedian Regan Jones, hilariously downbeat) is abandoning his own house, perhaps because Dolph mentions Mike's daily jog; something Mike vehement denies he even does.  It is raining at Dolph's office, in a Synechdoche, New York sort of way (one of this films many "No Reason" moments) and his co-workers give him the evil eye for, well, best not to reveal why, but suffice it to say, Dolph is a creature of habit.  Dolph channels the silent rage brought upon by his own effectually in this particular moment in his life - when any chance of even the smallest of comforts spiraling wildly out of reach - in a Greenberg-esque fit of pique by railing at a badly designed pizza logo.  Miscommunication and bad decisions ensue.  People unabashedly spout the phrase "vis-à-vis."  The movie, in fact, is very much concerned with wondering how any form of human vis-à-vis communication is every truly successful.  Personally, I would consider Wrong to be a magnificent double feature with Roy Andersson's Songs from the Second Floor; even though I'm not sure how to pick which film would be the feature and which would be the B-Side.
This brings us to the films coup de grâce in the form of serial scene stealer William Fichtner who plays the mysterious, new-age rich hippie type, Master Chang with the strangest of accents.  At my screening, fellow ScreenAnarchy writer Peter Kuplowski amusingly pointed out that this is the closest anyone will ever come to doing Mr. Kobayashi since Pete Postelwaite as passed on to the great tea-cup-maker in the sky.  Master Chang's unique line of business is best left undiscussed in a mere film review, but suffice it to say (again) that he has several key insights to as to the why and the how (if not the where) of missing Paul.  Chang even has a pet detective (Steve Little of Eastbound & Down and The Catechism Cataclysm) on the case.  Both Chang and his pet detective's methods and their back and forths with Dolph underline the big theme of the film:  How we tend to over-complicate a situation by sometimes failing to see the glaringly obvious.  There is also the case of a dead, maybe not dead, gardener, a curious palm tree and a man who, unsolicited, paints folks cars different colours, because, maybe they might have wanted that rather random service done for them.  Wrong is a fan of the negative billion option from your cable company.  The film at one point or another demonstrates the tediousness of having to listen to other people explain the dream they had the previous night, the frustration of simply making someone wait and the awkwardness of being in close proximity of anyones intense outpourings of any emotion.  With Wrong, Mr. Oizo or Quentin Dupieux does all of these things to his audience in a kinda-meta-kinda-not-sense, and does it often.  When the film unfolds on screen not so much as narrative, but rather as a 'metaphorical cinematic stand-up routine,' it is actually pretty great.
Sign-In to Vote
Tweet 0 Submit

Do you feel this content is inappropriate or infringes upon your rights? Click here to report it, or see our DMCA policy.
Quentin DupieuxJack PlotnickEric JudorAlexis DzienaSteve LittleComedyMystery

Solid review, Kurt. Really enjoy how you flesh out your initial impressions, especially "Visually, the movie has a real penchant for filmmaking gags. Much of the shocking (but not necessarily abrupt) punch-lines are executed by revealing things just outside the frame, or even within the frame via rack-focus, with the precision of a master comedian." I guess I'll have to write a review just to quote that!! Thanks for enhancing my already heightened appreciation for this absurdist masterpiece.

Loved Rubber. I need this film. And that Marilyn Manson cop one, too.

It's an absurdist masterwork, and this is only Mr. Oizo's second feature film.

I have to stick up for his forgotten first feature Steak, which deconstructs the high-school-clique film by reducing it to a bunch of students (none of whom looks a day younger than 35) who just do ridiculous things all day, every day, and are inexplicably popular for it. Which is exactly how I remember high school too.

I'd kill to see STEAK, I always thought it was a short film. Is this available anywhere?