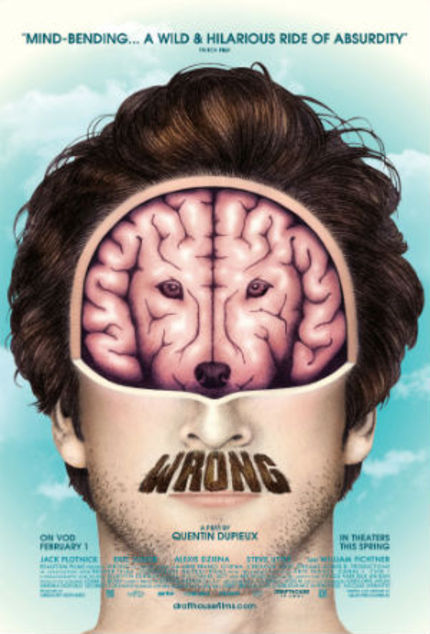 Writer / director / composer / editor / cinematographer / auteur / weirdo Quentin Dupieux is a guy who pulls the mat right out from under the Hollywood norm and takes bold and colorful chances. A couple of years ago, Dupieux created a feature-length film about a killer tire called Rubber. He broke every rule he could and created something pretty fucking incredible. With Wrong, Dupieux turns a little story about a man's quest to find his missing dog into a mind-bending, chopped and screwed reality where almost nothing makes sense. Dear reader, this ain't your average Homeward Bound.

Dolph Spring (Rubber's Jack Plotnick) is having a bad week. He wakes up every day at 7:60AM (not a typo), but on this day, something is different. As he goes to feed his companion, the love of his life, his dog Paul, he can't find him anywhere. To make matters worse, he shows up to work - a travel agency where it rains inside the office - and is told that since he was fired three months prior (he still shows up pretending to work), he needs to leave the building and never ever come back. So Dolph sets out to find Paul and along his journey he meets the strangest people who may be connected to Paul's disappearance. These include professional pet lover Master Chang (the incredible William Fichtner), Private Detective Ronnie (Steve Little), his gardener Victor (Eric Judor), and the prettiest pizza delivery girl you'll ever see, Emma (Alexis Dziena).

What makes Dupieux's movies so infectious is that in the wildly weird universe he creates, there is a brilliant undertone throughout all of the oddities happening. Every character seems to be in on the fun, even if things end up disastrously for them. In the opening credits of Wrong, a van burns in flames while a fireman reads a newspaper and poops close by. His associates watch him. In Wrong people take it upon themselves to paint other's cars and Dolph Spring winds up impregnating a girl he's never slept with. This is normal for a Dupieux movie and is just a small introduction to Wrong's universe. This is what sells Wrong. Like Rubber, Wrong bends and breaks every cinematic rule-of-thumb. Dupieux knows what he wants, whether it makes sense or not, and it works.

Everyone in the film creates their own charm, but it's Fichtner who steals the show as Master Chang. As Chang, Fichtner embodies this champion pet lover and truly makes the character his own. To aid Dolph on his search, Master Chang gives him two books he's written about pet love, My Life, My Dog, My Strength Volumes One and Two. The very awkward methods in his books are supposed to aid Dolph, but wind up making him almost lose his mind - or what's left of it, anyway.

Dupieux doesn't care about standards and brings all the right goods to Wrong. He's batshit crazy and takes us on wild and hilarious ride of absurdity. Bringing the fun into arthouse cinema, Wrong will leave you strangely addicted to Dupieux's world.

(Review originally published during the Sundance Film Festival in January 2012. Wrong will be available to watch via various VOD platforms in the U.S., starting tomorrow, February 1, and will receive a limited theatrical release on March 29.