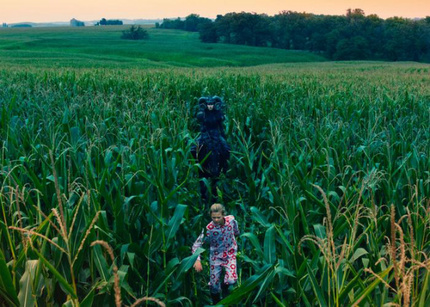 Watching something grow into what you always believed it could be is joyful stuff. I've had my experience doing just that with events before.

The communal aspect of events makes them different than writing, which is normally pretty solitary, even after what you've written has been published. An event is something you do and then watch other people enjoy even when you have to run around like crazy during the event to keep it running smoothly.

Four years ago when my brothers at the Chicago Film Critics Association decided to launch their own event, a film festival curated by Chicago critics, I had a feeling it would be joyful stuff indeed. It has outgrown my every expectation. Kudos to the CFCA for shepherding and shaping this amazing event.

This years festival, runs May 20-26, and will take place at the Music Box Theater. It opens with special guests Chad Hartigan, director, and star, Craig Robinson, introducing their new comedy, Morris from America. Other guests appearing alongside screenings include writer-director Ira Sachs, presenting Little Men, writer-director Ti West, who breaks away from horror (The Innkeepers, The Sacrament, and House of the Devil) to try his hand at the Western. His new film In A Valley of Violence boasts an impressive cast that includes, John Travolta, Karen Gillan, and Ethan Hawke. The closing film of the festival is Operator. The comedy about a happily married couple whose decision to use each other in their work creates major unrest. Actors Martin Starr, Sharon Greene, and director Logan Kibens who will do a Q and A following the festivals final screening, Operator

But what has me most excited about the festival this year is the number of horror screenings. Demon is a film I missed at Fantastic Fest last year. I've already seen excellent The Blackcoat's Daughter under the title February and can't wait for our audience's reaction. Other horror films I haven't seen include the much heralded Iranian effort Under The Shadow, the abyss black comedy Trash Fire, and Another Evil, a funny but by all accounts plenty scary take on the exorcism genre.

Clue us in on the kinds of conversations the CCFF team has to navigate to put together a well balanced festival.

Brian Tallerico: Oh my God. There are so many aspects of it that I wouldn't know where to start. First and foremost, it's about movies we saw and loved at Toronto, Sundance and SXSW. But we realize we may not have seen everything, so we often reach out and try to fill in any gaps in viewing. Then it becomes about balance.

Having a good full day of programming every day that represents different themes, parts of the world, and, this year we're especially proud of our large number of female-directed films. We have multiple female directors coming to do Q&As, including Patricia Rozema for Into the Forest, Anne Hamilton for American Fable and Logan Kibens for Operator. And Jocelyn DeBoer, who was here for Dead Snow 2, returns with a short she directed.

Does the Midnight programming fill a special place in the programmers heart?

Yes and no. I think most of us are horror fans, and we recognize the joy of horror fans in being the first to be able to see a major new genre film, but it's actually been one of the more difficult aspects lately in that the pool has been somewhat shallow. For every Babadook, there are a dozen festival horror films that aren't worth it. So, we end up being very picky in our Midnight programming. We have a great crop this year.

The festival has a pretty solid track record of showcasing horror films (WILLOW CREEK, GOODNIGHT MOMMY, DEAD SNOW: RED VS. DEAD, HOUSEBOUND, ALL THE BOYS LOVE MANDY LANE, BLACK ROCK). But this year, horror is an even bigger part of the programming. Coincidence?

Again, yes and no. We've seen the success of these films in the past, and we always try to replicate success, but we generally just go after the movies we like. So it's a coincidence that so many are "dark" this year.

CCFF clearly has no problem being associated with indie horror genre films but other films this year, while not exactly horror films, certainly qualify as dark cinema. I'm thinking of GOAT, DARK NIGHT, and Ti West's revenge western, IN A VALLEY OF VIOLENCE. Are audiences more responsive to a full slate this kind of challenging stuff now?

It seems like they are. I have to say we joked about needing more comedies and cartoons as we were programming. We noticed how dark this year's line-up was, but it's a reflection of the independent film world, which is, of course, a reflection of our world.

Which of the darker films are you the most excited to be screening for the festival?

In a Valley of Violence is going to be fantastic to watch with a crowd. Demon is a true gem. As is The Blackcoat's Daughter. And I'm curious to see how people respond to Dark Night. There's something to see every day.

For a full lineup of festival guests, screenings and information on how to purchase tickets visit the Chicago Critics Film Festival site.

Here's are descriptions about the films I'm most excited to see. Descriptions courtesy of Festival Co-Producer Erik Childress.

The Blackcoat's Daughter. Formerly titled February, this debut feature from writer-director Oz Perkins (son of Anthony Perkins) follows two students (Kiernan Shipka and Lucy Boynton) who have been left behind and a young woman (Emma Roberts) who has just left the hospital and is hitchhiking towards the school with a seemingly good-natured couple (James Remar and Lauren Holly).

Goat. Co-written by David Gordon Green and based on the memoir by Brad Land, this harrowing drama follows a 19-year-old boy, who, following a brutal assault, pledges the college fraternity to which his older brother belongs. Directed by former documentarian Andrew Neel and co-starring Nick Jonas and James Franco, the film offers an eye-opening look at some of the more appalling aspects of masculinity in contemporary society.

Trash Fire. Festival producer Childress describes this one as "super-dark," a comedy with horror undertones about an unpleasant young man who, to please his pregnant girlfriend (Angela Trimbur) and prove that he can be a reliable father figure, agrees to visit the estranged grandmother (Fionnula Flanagan) and sister (Annalynn McCord). The visit goes poorly.

American Fable. In this Illinois-shot thriller set during the 1980s, an 11-year-old girl (Peyton Kennedy) is torn between doing the right thing and loyalty to her beloved father when she makes a shocking discovery inside the silo of her family's failing farm. Writer-director Anne Hamilton and co-producer Kishori Rajan are currently scheduled to appear with the film.

Another Evil. In this cross between Paranormal Activity and The Cable Guy, a modern artist discovers a ghost haunting his family's vacation home and employs an "industrial-grade exorcist" in order to rid themselves of the spirit. As it turns out, the paranormal investigator just might prove to be more terrifying to him and his loved ones than the actual ghost.

Dark Night. Loosely inspired by the horrific real-life movie theater shootings in Aurora, Colo., and Lafayette, La., this controversial drama, which premiered at this year's Sundance Film Festival, follows the lives of a seemingly disparate group of residents of Sarasota, Fla., whose lives intersect at a movie theater that becomes the latest tragic result of America's obsession with guns and inability to grapple with the problem of mental illness.

Demon. In this updated version of The Dybbuk from the late filmmaker Marcin Wrona, a bridegroom finds himself possessed by a malevolent spirit while in the middle of his own wedding celebration.

The Fits. In this Sundance festival alum, an 11-year-old tomboy becomes fascinated with a dance team that she sees working out at the gym. After she joins up and struggles to fit in with them, things grow mysterious when the other members begin to succumb to an unexplained outbreak of violent fits and fainting spells.

In a Valley of Violence. John Travolta makes his first appearance in a western in this bloody saga about a mysterious stranger (Ethan Hawke) who vows revenge on several residents of a town, including the local marshal (Travolta) after they do something horrible to his only friend. Ti West, who has become a big name in horror circles in recent years thanks to films like House of the Devil, The Innkeepers and The Sacrament, is scheduled to appear to present the film, which marks his first crack at the western genre as well.

Into the Forest. Ellen Page and Evan Rachel Wood star in this drama about a pair of sisters living with their father in a remote house in the woods whose bucolic lives are upended when the electricity goes out seemingly everywhere one day with no explanation and never comes back. When tragedy leaves them to fend for themselves, they do what they can to survive the dangers of a world teetering ever closer to apocalypse.

Under the Shadow. Set in Iran during the time in the 1980s when the country was reeling from the effects of revolution and their long-running war with Iraq, this horror film from writer-director Babak Anvari follows a mother and daughter who are trying to cope with those ordinary upheavals when an evil presence begins to inhabit their home. Arguably the most acclaimed horror film to emerge from Sundance this year, this film has been compared favorably to such recent genre favorites as The Babadook and It Follows.