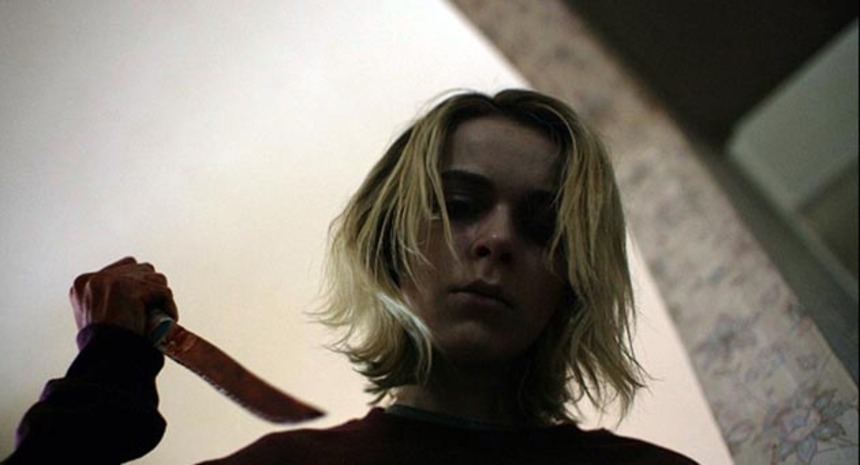 Something creepy is happening at the Bramford Academy Catholic girls school. While it isn't exactly clear what is going on, it's very obvious that the snowy scenery isn't the only thing giving you chills in Osgood Perkins' icy thriller February. This is a very tense and mysterious psychological thriller that delivers on its promise to have the audience seriously creeped out.

The film starts by introducing us to Kat (Kiernan Shipka - yes, that's Sally from Mad Men). Kat is a freshman at Bramford who is haunted by dreams of her parents' deaths. When they don't appear to pick her up for winter break, it's pretty clear that something is wrong. So Kat is left in the care of Rose (Lucy Boynton), an older girl with a secret. Rose hasn't been such a good Catholic girl and she has arranged to have her parents "accidentally" pick her up a day late so she can have some alone time to let her boyfriend know she is pregnant. Babysitting the freshman left-behind Kat is not part of her plans.

Meanwhile a girl called Joan (Emma Roberts) is traveling on her own across the icy landscape. We don't know where Joan came from but her visions hint to a past that involved mental health issues. Left at a frozen bus stop, Joan looks in trouble until a nice old man and his moody wife offer her a ride. Confused and perhaps tormented by an unknown force, Joan accepts the ride, only knowing the couple is headed towards Bramford.

Perkins employs quite the complex knowledge hierarchy in his film. It's not entirely clear if even the characters know what is going on. Time shifts are used and there are some characters who seem to be just a bit more in the know than others (or do they?). All of this leads to a general feeling of uneasiness that increases the overall creepiness factor. This is a tense film that never quite lets you relax.

The three leads all turn in strong performances, however, some of the minor roles come across slightly heavy-handed. The naturalistic cinematography and bleak production design also adds to the overall mood. Perkins should be congratulated for his execution of vision. February sets out to be a cold, bleak, and creepy thriller. All things considered, it succeeds wildly.

Do you feel this content is inappropriate or infringes upon your rights? Click here to report it, or see our DMCA policy.
Emma RobertsFantastic FestKiernan ShipkaOz Perkins