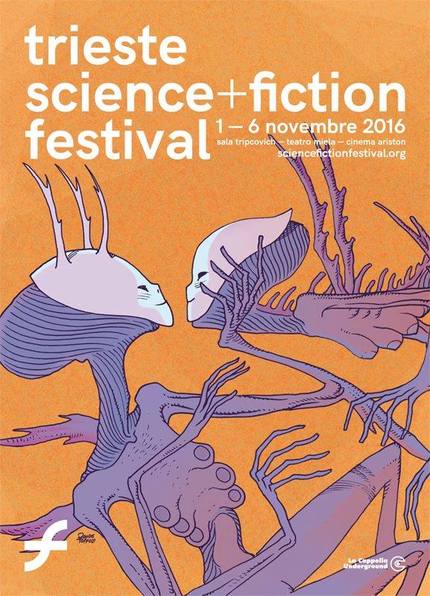 The northeast corner of Italy will be a hotbed of science fiction and fantastic cinema as the Trieste Science+Fiction Festival takes over Trieste, November 1st to 6th. Morgan, Luke Scott's (son of Ridley) feature film debut about science once again attempting to intefere with nature, wil open the festival for its Italian premiere. Rutger Hauer, an actor whose has been a mainstay of fantastic cinema for fourty years, will be the guest of honour to receive the Urania d’Argento Award.

It wouldn't be a sci-fi festival without a celebration of the 50th anniversary of Star Trek. Adam Nimoy will be in attendance with his documentary about his father, For the Love of Spock; joining him will be Terry Farrell, better known as Dax from Star Trek: Deep Space Nine. Closing the festival will be another documentary, Zero Days. Alex Gibney's political thriller tells the story of a computer malware specifically made to fight terrorism that (of course) goes beyond its intended target.

And there's plenty of other great films being screened over the six-day festival. On the sci-fi side, there is the world premiere of Almost Dead (Giorgio Bruno), where scientists have mere hours to find an antidote for a virus that turns people into zombies; Joyce Nashawati's understated and brilliant experimental dystopian Blind Sun; Claire Carre's visionary Embers; the determination of the last of humankind and the love of tennis in The Open; and Takashi Miike's Terraformars.

For those who want a little more fantastical/horror to their festival films, there is the disturbing Under the Shadow; the thrilling runaway hit Train to Busan (and its prequel Seoul Station); the horror anthology Southbound; and another zombies-in-a-strange-place with Attack of the Lederhosen Zombies.

There is a treasure-trove of Italian content. Cult director Ruggero Deodato will present his latest film Ballad in Blood, with its score composed by Claudio Simonetti;  Luigi Cozzi returns with the final version of his Blood on Méliès Moon, which work in progress was shown for the first time during last year’s Trieste Science+Fiction Festival. The story is set in France, in 1890, when inventor Louis Le Prince, after registering the patent for a machine that films moving images and projects them onto a screen, disappeared in strange circumstances, And national projects Alieween by Federico Sfascia, East End by Skanf & Puccio and Blatta, the new web series project by Daniele Ciprì, will be showcased.

And it's not just about watching movies. The festival will host the Fantastic Film Forum, a meeting place for filmmakers to discuss new projects. The ARPA FVG - Regional Lab for Environmental Education is collaborating with the festival on screenings of films that discuss the future of our planet and environmental concerns.

Video games are now becoming a regular addition to fantastic genre film festivals. Science+Fiction will feature Play It Again: (R)evolution, exhibiting the videogames whole generations have been dreaming about, is back as a mutant, providing a privileged space and an overview of the progress of pixels: a journey amongst nearly forgotten ruins and virtual realities still to be explored.

The Meetings on Futurology are a bridge between science and literature, reality and fiction, astrophysicists and writers, particle accelerators and Alfa agents: Carlo Fonda from the SciFabLab of ICTP, Paolo Gallina (winner of the Galileo award for science communication with his L’anima delle macchine), information theorist Giuseppe O. Longo, Paolo Molaro from the Trieste Astronomic Observatory, Michele Rebesco from the National Institute of Oceanography and Experimental Geophysics, Claudio Tuniz from the Abdus Salam International Centre for Theoretical Physics (ICTP), and Marina Cobal, among others, will be in attendance.

Not to mention exhibits of pulp fiction, toys, a retrospective series of classic sci-fi films including Solaris, Per aspera ad astra by Ričard Viktorov, and in horror, a 4k restored copy of George A. Romero's Dawn of the Dead. Certainly, if any of our readers are remotely close or can get to Trieste, you'll have no end of exciting films, exhibits, meetings, and other events to attend. More details are at the festival's website below.

Do you feel this content is inappropriate or infringes upon your rights? Click here to report it, or see our DMCA policy.
Luke ScottMorganRutger HauerTrieste Science+Fiction Festival

More about For the Love of Spock