City's doing as expected and United is shitting the bed (at  the very least they've scored a goal this year, unlike my Hammers). It's not all bad news in Manchester, England, as our friends at Grimmfest have announced the full lineup for this year's festival!

The annual gathering of freaks and geeks from the Manchester area helps kick off the Halloween season in the region and there are plenty of great movies to help everyone get there. The festival opens with Martin Owen's The Lonliest Boy in the World, what the festival calls Ed Gein (look it up) meets Edward Scissor Hands.

We're happy to see some of our faves from the circuit have made the cut, including Final Cut, the French remake of One Cut of the Dead, Vesper, The Passenger, Piggy, The Harbinger, Holy Shit! and Pussycake. We'd like to know how Cult Hero was received after its award winning bow at Fantasia last month.

The full lineup follows in the announcement below!

GRIMMFEST UNVEILS FULL FEATURE FILM LINE-UP FOR 2022.
Grimmfest, Manchester's International Festival of Fantastic Film is delighted to announce the full feature film line-up for 2022.
The festival will be returning to regular venue, The Odeon Great Northern, in Manchester on October 6th – 9th, for four high-impact, fear-filled days of the very best in genre cinema.
All twenty carefully selected feature films are premieres, all are new to Manchester, and many are international or UK premieres.
This year's festival will open with the international premiere of Martin Owen’s THE LONELIEST BOY IN THE WORLD (UK). Ed Gein meets EDWARD SCISSORHANDS, as an unstable and otherworldly Mother's boy seeks a replacement family in the local cemetery, in this darkly comic and delightfully quirky “fairy tale with Zombies”.
The closing night film is one almighty and monstrous international premiere from Thailand, Lee Thongkham’s THE LAKE is a massive creature feature extravaganza that combines awesome physical effects work with state of the art VFX to pit the inhabitants of a small town against a threat of huge proportions. This one is not to be missed!
FINAL CUT (France) was the opening film at this year’s Cannes. This riotously funny re-imagining of micro-budget classic ONE CUT OF THE DEAD, from Oscar-winning writer-director Michel Hazanavicius, features A List French stars, Romain Duris, Berenice Bejo and Matilda Lutz in this hilarious take on the complexities of the film making process.
Neil LaBute (THE COMPANY OF MEN, THE WICKERMAN) offers a sly modern spin on a Gothic genre classic, as a casual pick-up turns increasingly strange and sinister. Part EC Comics morality tale, part sour comedy of sexual manners, Justin Long and Kate Bosworth star in the International Premiere of HOUSE OF DARKNESS.

A young girl, struggling to awake from a coma, navigates the nightmare-freighted world of her own subconscious in the international premiere of Ryan Stevens Harris's astonishing steampunk gothic fairy tale, MOON GARDEN (USA), which evokes the best of Jan Svankmajer, Terry Gilliam and Clive Barker.
A surreal and sulphurous study of the legacy of abuse, and of the iniquities of a murderous father upon his damaged children in the UK premiere of Karim Ouelhaj's MEGALOMANIAC (Belgium), Winner of “Best Feature” at Fantasia 2022. Emotionally gruelling, unflinchingly brutal and utterly compelling.
Scott Slone offers a whip-smart reinvention of the Found Footage genre in the international premiere of MALIBU HORROR STORY (USA). A machine-tooled old-school thrill ride, packed with brutally effective jump scares and dark, twisted wit. 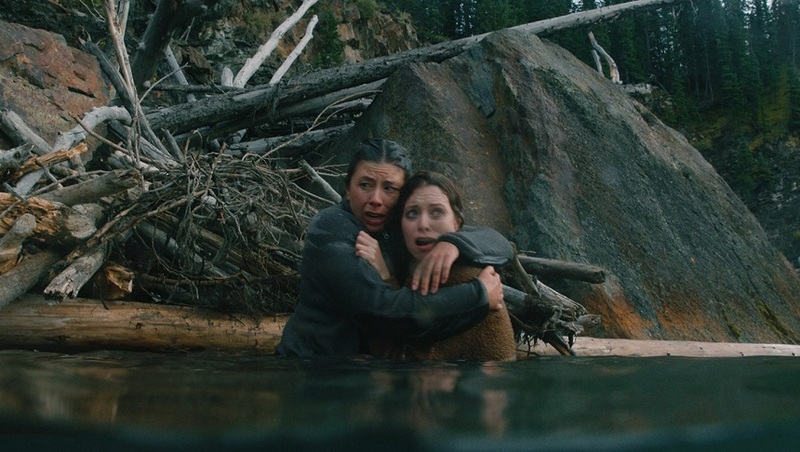 There's weirdness in the wilderness, as a group of women on a therapeutic “outward bound” trip to the mountains must confront their deepest traumas given monstrous physical form, in Berkley Brady's unsettling parable of the rocky road to recovery, in the international premiere of DARK NATURE (Canada).
A trio of desperate criminals choose the wrong home to invade and find themselves caught in a fiendish trap, in Vincenzo Ricchiuto's cruel and clockwork-precise study of revenge. The international premiere of THE GOLDSMITH (Italy), stars Italian cinema icon Stefania Casini (SUSPIRIA, 1900).
Jesse Thomas Cook takes aim at Reality TV, True Crime Machismo, New Age cultism, and the contemporary internet hate figure of the “Karen”, in the gleefully cartoonish satire of self-actualisation, and self-delusion, in the international premiere of CULT HERO (Canada), fresh from its world premiere at Fantasia fest.
A teenage girl strives to protect her invalid father from a callous ruling class, and the mercenary instincts of his brother, as she works on an experiment that might just save humanity, in Kristina Buozyte and Bruno Samper's sci-fi eco-fable, VESPER (Belgium/France). Rafaella Chapman, Eddie Marsan and Richard Brake star in this UK premiere. 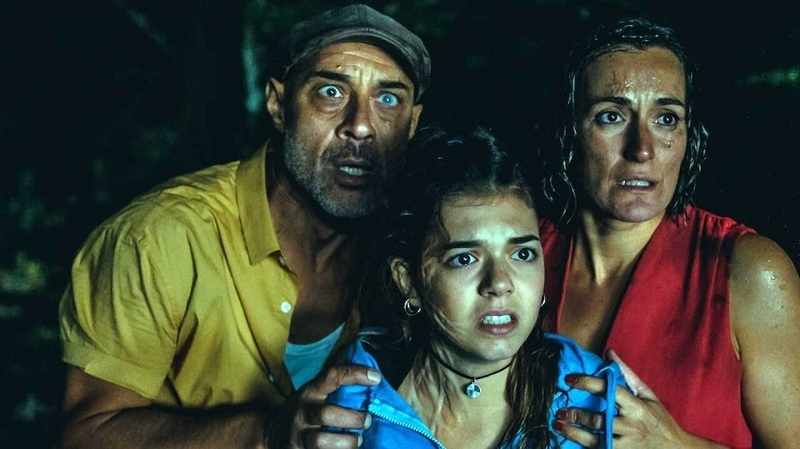 A rideshare road movie with a shapeshifting alien parasite on board, Raúl Cerezo and Fernando González Gómez's THE PASSENGER (Spain) relocates the action of THE THING to the back of a moving vehicle, for a mordantly funny horror-comedy, making its UK premiere.
Pitch-black comedy, in the UK premiere of FEED ME (UK), Adam Leader and Richard Oakes' study of suicidal depression, cannibalism, and emotional alienation, which dances deftly between farce and ferocity. Horrifyingly funny and at times just plain horrifying. 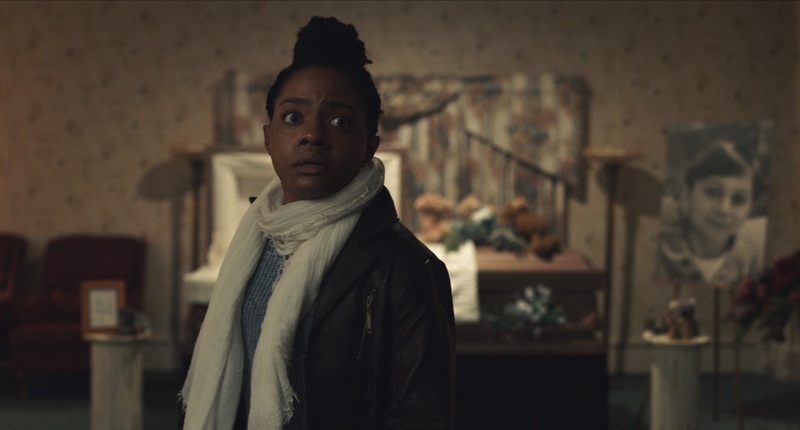 A frightened young woman is infected by an inescapable waking nightmare and finds herself stalked by a predatory dream demon in Andy Mitton’s (THE WITCH IN THE WINDOW) THE HARBINGER (Canada), which recasts the recent pandemic paranoia as a battle for existence itself.
Grimmfest favourites AJ Bowen and Brea Grant swap snappy one liners and strike sparks off one another in Jacob Gentry's (BROADCAST SIGNAL INTRUTION, THE SIGNAL) genre-savvy splicing of Desert Noir, freewheeling 70s road movie, and paranoid Science Fiction conspiracy thriller, NIGHT SKY (USA).
A seemingly naive and devout young woman finds herself in the underground world of truck stop sex workers in John Swab’s (LET ME MAKE YOU A MARTYR), CANDY LAND (USA). An unflinching exploration of religious gaslighting that spirals into brutal murder. Starring William Baldwin, Olivia Luccardi (IT FOLLOWS), Owen Mitchell (X) and Guinevere Turner (AMERICAN PSYCHO).
Japanese maestro, Ryûhei Kitamura (MIDNIGHT MEAT TRAIN) pitches vicious heist men Stephen Dorf and Emile Hirsch against Vernon Wells' illegal organ trafficker and implacable seven-foot henchwoman Erika Ervin, then cheerfully cranks the carnage way past eleven, in the gleefully gory THE PRICE WE PAY (USA).
A bullied and brutalised teenage girl is offered an opportunity for revenge against her cruel tormenters, in Carlotta Pereda's, PIGGY (Spain), a complex exploration of female body image and self-loathing, moral complicity, retribution and redemption.
An ambitious architect wakes up to discover he is trapped inside a filthy porta-toilet and faces a frantic race against time to free himself before he is buried under concrete. Claustrophobic tension and scatological humour combine to stunning effect in Lukas Rinker's pressure cooker thriller, HOLY SHIT! (Germany).
A honeymooning couple choose the wrong way to consolidate their marital union, as a mind-expanding experiment with unfamiliar psychotropic drugs unleashes monstrous appetites and mental and moral meltdown, in John Ainslie's hallucinatory, hilarious, and utterly horrifying, DO NOT DISTURB (USA). 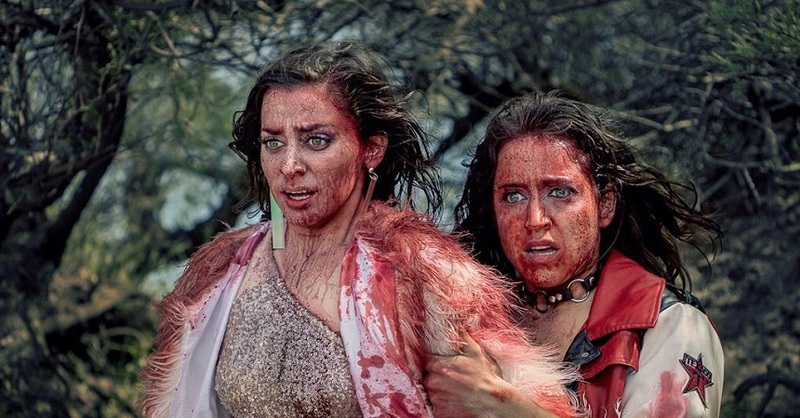 Josie and the Pussycats collide with Lovecraft and Fulci, as an all-girl rock band agree to an extra gig, only to find themselves facing off against pan-dimensional alien brain parasites and a whole town full of ravening zombies, in Pablo Parés' pyrotechnic splatterfest, and future midnight movie classic, PUSSYCAKE (Argentina).
The full screening schedule, along with details of the short film programmes, festival guests, and individual tickets will be released soon.
Grimmfest 2022 full festival passes are available now, from www.grimmfest.com.

More about La Pasajera (The Passenger)